The Speaker of Abia State, Rt Hon Chinedum Enyinnaya Orji has charged journalists to always allow the principles of constructive writings and criticisms guide them in the discharge of their duties.

The Speaker stated this yesterday in Umuahia at the presentation/launch of a book titled, “Professional Journalism Practice under Threat” written by Chief Sam Obinna Ibe, Chairman, Correspondents Chapel of Abia State Nigerian Union of Journalists.

The Speaker who was represented by the Lawmaker representing Umuahia South State Constituency at the Abia State House of Assembly, Hon Jerry Uzosike, congratulated the author of the book, saying it’s highly commendable that Comrade Ibe after many years in the field of journalism came up with the book to help mentor and coach the younger ones in the field of journalism.

The Speaker who lamented the high level of unprofessionalism in the journalism sector said “journalists should device means to remain on top of their game with constructive writing and criticism serving as their watchword as this will help leaders adjust accordingly and improve on service delivery to the people for the greater benefit of society which will in turn lead to greater respect for the pen profession”.

In his opening remarks, the author thanked the God for making the day a reality and, indeed, a dream come through despite the many difficulties and numerous challenges he had to pass through in the course of writing the book.

Comrade Ibe further said, “I was inspired to embark on the book project because the journalism profession as practised today has been debased to a ridiculous level having become a profession that’s an all comers affair.

“There is that urgent need, therefore, for concerted efforts as this one to stop the rot and return our profession to its original status of nobility”, he said.

He went ahead to inform that the book ‘Professional Journalism Practice under Threat’ also addresses and provides answers to some unethical blunders committed by his colleagues in the line of duty.

Highpoint of the event which held under the Chairmanship of Chief Ugochukwu Ezenwa Chikezie, Deputy Registrar, Federal Polythecnic Unwana Afikpo, Ebonyi State, was the unveiling of the book. 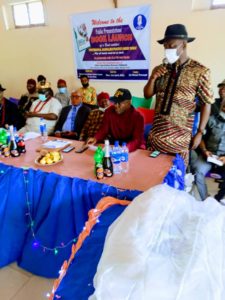 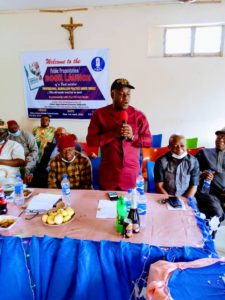 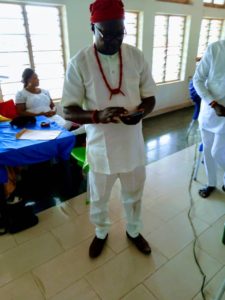 How he was reinstated, by minister