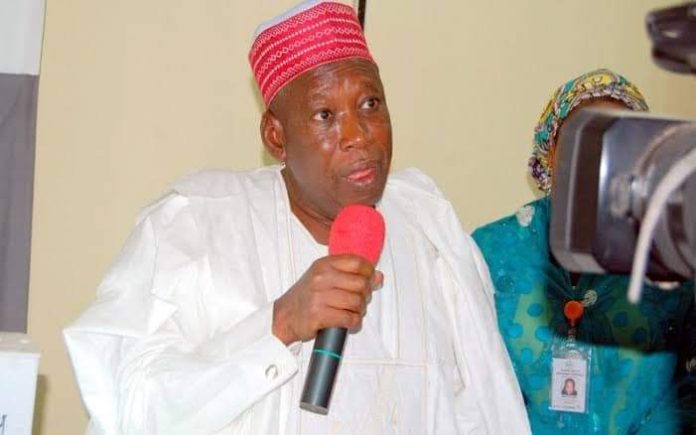 Ganduje said that the funds will be used to reduce the hardship been faced by the victims.

He also on Tuesday presented a letter of sympathy to the State Governor, Aminu Masari, commending him for constituting a high-powered committee to find out the actual causes of the unfortunate inferno.

He added that there is no doubt that it was rather unfortunate that the commercial activities in the market affect not only the people of Katsina State but also people of the northern part of the country.

“It’s very unfortunate but that is the wish from Almighty Allah. We will continue to pray for not only the recovery of what was lost but also the prevention of future occurrence of such incidence”. Ganduje noted.

On his part, governor Aminu Masari thanked governor Abdullahi Ganduje for the donation which he believed will go a long way in helping the market traders to ameliorate part of what they have lost.

He said, as good Muslims, victims must take the incident in good faith as all good things he believed comes from God Almighty and that people should blame themselves for their actions, inactions, or utterances for anything contrary.

“We thank Almighty Allah for his Mercy because the incident took place in the day time and if it had happened in the night, only God knows the extent of the damage”. Masari added.

Ganduje was during the sympathy visit accompanied by members of the business community in Kano State as well as his top government officials.

To this end, the sum of Two Hundred and fifteen million Naira has so far been donated by commiserations trooping to the state since the occurrence of the incidence.

Governor Aminu Masari had on March 29th, 2021 constituted an administrative committee to investigate the immediate and remote causes of the Katsina Central Market fire incident.

In his inaugural speech held at the Council Chamber of the Katsina Government House, the government announced that the committee will investigate, determine and find out the causes and the extent of damages of the unfortunate fire incident.

He observed that the market which serves the whole Katsina State including some parts of the Niger Republic had never witnessed an incident similar to this since its creation, describing the incident as the most devastating in the history of fire incidents in the state.

Other terms of references of the committee include among others; identifying victims whose property has been gutted by the inferno, recommend ways and measures to avert future occurrence as well as co-opt any person which the committee feels to assist.

Masari further assured determination to do everything possible to improve not only the standard of the market but also to assist the affected persons.

Also, the chairman of the committee and Commissioner of Works, Housing, And Transport, Alhaji Tasi’u Dandagoro assured the committee will reciprocate the gesture accordingly and appropriately by doing what is expected.

“This committee will swing into action immediately and no part of this disaster will be left untouched. We will do our possible best to see that We put up our findings and recommendations on time for considerations.

I want to assure your Excellency that we will do all our best and make appropriate recommendations to the state government”, Dandagoro said.