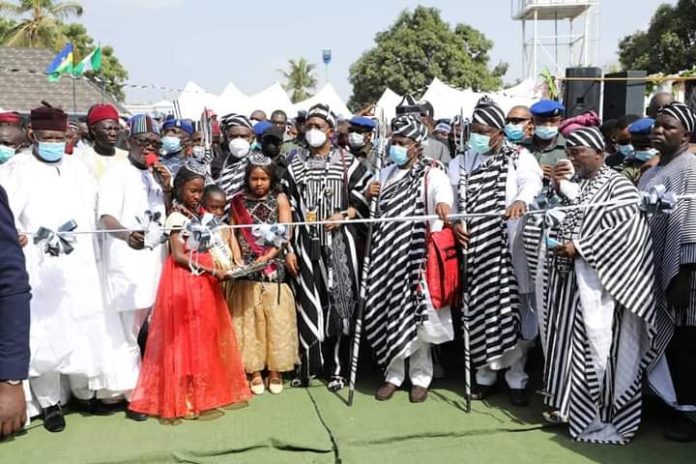 Rivers State Governor, Nyesom Ezenwo Wike says Governors of the Peoples Democratic Party(PDP) have continued to demonstrate that governance is about solving socioeconomic problems and improving lives of the people.

This, he said, has distinguished PDP from the All Progressives Congress (APC) and its failings because of their lack of capacity in serving Nigerians and fulfilling the party’s social contract with Nigerians.

Governor Wike made the assertion while inaugurating the 2.5 kilometers Isaac Shaahu Road in Gboko Town, on Thursday that was constructed by Governor of Benue State, Samuel Ortom.

The Rivers State Governor stated that he had repeatedly told all political parties to acknowledge the social contract their elected officers have with the people and ensure that they dutifully fulfill them like it is been done in PDP controlled States.

Governor Wike expressed the delight of PDP with the performance of Governor Ortom who is not been deterred in providing dividends of democracy to his people, and also naming the three road projects after prominent sons of Benue State to immortalise them.

“About two months ago, you invited me to come and commission road projects. Like I have said before, we are very happy with what you’ve been able to do for the people of Benue State.

“I am very sure that you’re fulfilling the social contract you have with the people. I have told all political parties to fulfill their social contract.

“PDP as a party, we are fulfilling the social contract we have with the people of Nigeria. Other parties should do the same, by providing dividends of democracy.”

Commissioning the 1.6 kilometers Aper Aku Road in Gboko Town, Chairman of PDP Governors’ Forum and Governor of Sokoto State, Aminu Waziri Tambuwal, harped on the need for leaders to continue to build bridges of friendship, and promote coexistence among the citizenry.

“You can see what Governor Ortom has done. It is great honour for me and people of Sokoto to do this commissioning. I commend you, Governor Ortom for this and for other good works you’re doing for Benue people.

“We pray almighty God to continue to guide our leaders and our country. We must continue to build bridges of democracy.

The third road project, the 1 kilometer Prof. Martin Dent Road, was inaugurated by the Governor of Nassarawa State, Engr. Abdullah Sule, and it was performed by his commissioner of works.

Governor of Benue State, Samuel Ortom, who led the governors to the three road projects, also inaugurated the ultramodern Tor Tiv Palace, that he constructed saying the projects are part of effort of his administration to enhance the quality of life of the people.

Suspension Not Enough, Gov. Ikpeazu Should Sack His Chief Of Staff...