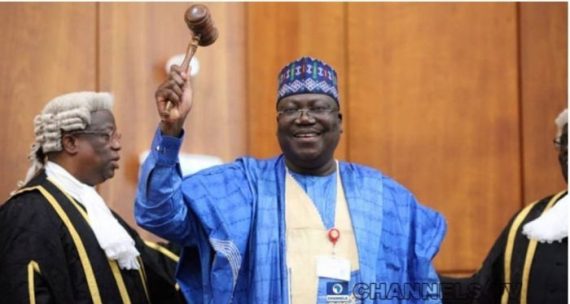 Critics of the current legislature have said that they seem to only be doing the will of President Muhammadu Buhari and the All Progressives Congres (APC), rather than working for the Nigerian people.

However, the Senate President who was Special Guest at the commissioning of New Evans Ewerem Way in Imo State noted that the two arms of government are working in tandem to see that the dividends of democracy are duly provided for the Nigerian people.

“We in the National Assembly have been working with the veto arm of the government, so far, so good. We do so consciously, we do so purposefully, we do so patriotically because we believe that both arms of government are voted in to serve the people.

“And where we will have to disagree with the veto arm of government, we’ll do so. We have done so before and if it becomes necessary to do so, we will do it again,” he said.

“We don’t care if the opposition will say ‘this rubber stamp assembly,’ you had an assembly that never saw anything good in working together, what did the people get, nothing.

“As a person, as the chairman of the National Assembly, as the president of the Senate, I don’t care if you say what we do is rubber stamp but you know inside you, inside your heart, that we are not Rubber stamp; we are there to make sure that the people of this country get the best deal from the government that they vote in.”

Following the recent spate of insecurity in the country, Senate President Ahmed Lawan has advocated for increase funding for security agencies in the country to procure adequate technologies and manpower needed to combat crime in the country in line with global best practice.

The Senate President made this statement in Owerri the Imo state capital when inaugurating some road projects embarked upon by the Uzodimma led administration in the state.

While condemning the recent attack on Police stations in Imo state and the illegal release of inmates at the Owerri Correctional Centre, Mr Lawan says the security agencies in the country need more resources to fight the spate of crime in the country and as the chairman of the Legislative arm in the country, they will continue to make appropriate laws that will increase funding for security agencies.