Home FEATURED Unconstitutional removal of president must be resisted – Sagay 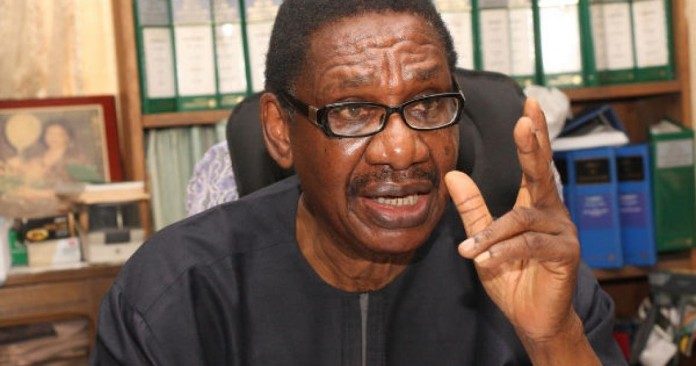 On Wednesday An eminent professor of law, Itse Sagay (SAN), urged security agencies to bring to justice anyone plotting to remove the president undemocratically.

Sagay was reacting to the Presidency’s claim that a plot to destabilise the country and force leadership change was in the offing.

Sagay noted that Nigerians had the right to criticise the president, but condemned any attempt at illegal power takeover.

“If any activity involves a breach of the law, then it should be dealt with in that manner. They (those behind it) should be brought to justice.

“Anything that creates untidiness in succession to power at that level can cause chaos and anarchy in the country and will result in a lot of bloodshed and death.

“Anyone caught trying to remove the president illegally and clandestinely outside the constitutional provisions deserves a very stern action by the law enforcement agencies.

“Anyone can criticise the President if they feel he is not doing his job effectively, but criticism must not constitute clandestine removal.

“For instance, if all the insecurity is part of a move by people to destabilise the country and give the impression that Nigeria is ungovernable under the president, therefore, an unconstitutional measure should be introduced to remove him, that is unacceptable, otherwise he should be criticised by anybody who feels he is not effectively dealing with the security situation in the country, and there is nothing wrong in that.”

Two other Senior Advocates of Nigeria (SAN), Mba Ukweni and Chino Obiagwu, emphasised that Nigerians were entitled to exercise their fundamental right to freedom of expression under Section 143 of the Constitution.

The senior lawyers opposed the idea of criminalising the act of expressing discontent with the government.

It was in reaction to the presidency’s claim that “these disruptive elements are now recruiting the leadership of some ethnic groups and politicians around the country, with the intention of convening some sort of conference, where a vote of no confidence would be passed on the President, thus throwing the land into further turmoil”.

Ukweni said: “There’s nothing wrong in Nigerians meeting to express their view on any particular issue.

“If the President is afraid that a particular gathering is going to pass a vote of no-confidence on him, then he should do the proper thing by resigning because that means that he is not governing the country well.”

He argued that elections were not the only way elected officials could be removed.

“It is not correct to say that the only way to remove the president is by voting him out of office. There is an impeachment procedure.

“The constitution in its wisdom has made provisions for the removal of a president from office.

“Section 143 of the Constitution stipulates the procedure for the removal of the president or vice president. If the provisions of section 143 are complied with, the president leaves office,” Ukweni said.

He said the constitutional grounds for removing the president include gross misconduct in the performance of the functions of his office and incapacity to perform those functions.

Obiagwu’s views were similar. He said: “There is freedom of expression. So, people have a right to express their views about government.

“Whether they’re satisfied or not, they have the right to express their opinion. There’s nothing illegal about it. It is everyone’s constitutional right.”

He wondered why the Presidency was worried about a vote of no confidence, noting that “there is no provision for that”.

“The only way a president can be removed through a vote of no confidence is through impeachment, which only the National Assembly can do.

“The people have a right to call for the impeachment of the president if they think he is not performing well, by rallying their representatives at the National Assembly,” he said.