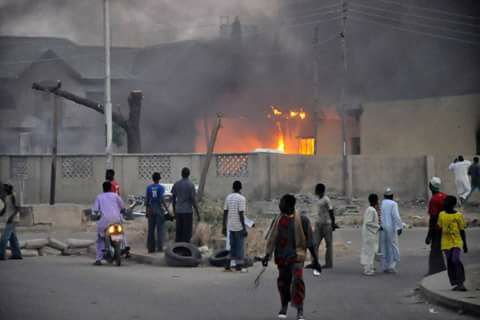 Not less than Fourteen (14) houses have been burnt down in Ikot Enan community, Akpabuyo Local Government Area of Cross River State.

According to an eyewitness, Ekpo Eyo, the incident occurred on Friday night and Saturday morning as other property worth millions of Naira were also destroyed.

It was gathered that electronics, furniture, personal belongings, cash, motorcycles and other valuables were destroyed.

It would be recalled that in the local government councils of Bakassi and Akpabuyo, the bank that serves the two local government including police station were destroyed during the EndSars demonstration.

Our findings revealed that the workers of the local government councils don’t go to work as the secretaries of the council were partially torched.

In a chat with newsmen on Monday, the Chairman of Bakassi local government council, Hon Iyadim Iyadim lamented the level of destruction in Akpabuyo.

He said crisis has engulfed Akpabuyo because there is no clear-cut boundary between Bakassi and Akpabuyo, and that one cannot really tell where the boundary is.

“On Friday night and Saturday morning, there were reports of mayhem and injuries inflicted on the people, where over 14 houses were razed down completely in Etak Inan, Ikot Ene ward of Akpabuyo local government area.

“The problem continues, meanwhile, at Ikot end, there was a corpse found by the roadside, the corpse was suspected to be that of an Okada rider whom it was alleged was killed and his motorcycle taken away. “The people of the two local government councils should come together to embrace peace and love as the level of destruction is much, we need to wake up.

“What are we talking about? Civil servants no longer come to work. Many people who built houses in the area have vacated because of fear.

“I plead with the youths to down tools and embrace peace. What will they achieve if they continue with violence, killing and maiming of innocent people?

“The traditional rulers are helpless because things are far beyond their control. If government cannot control them, who are the chiefs? They could be eliminated if they challenge them.

“They could go to their local houses and eliminate them, hence they have to trade with caution to save their lives. The bulk lies squarely on the table of the government to liaise with the two local governments to achieve peace and love,” he suggested.

What I will not do about Maina’s case – Buhari