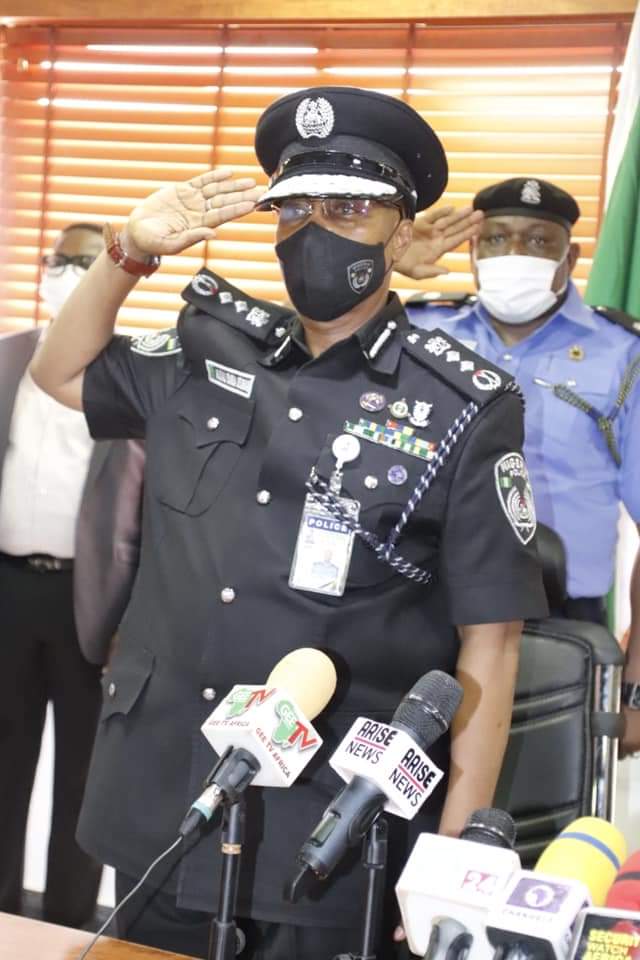 On Tuesday, the Acting Inspector-General of Police, IGP Usman Alkali Baba, launched a special operation for the Southeast region.

The IGP said the new Operation became necessary in the face of endless attacks on police formations and other public facilities in the Southeast region.

The Police boss charged his men to take the battle to the camp of those behind the attacks.

He blamed the attacks on the Indigenous People of Biafra (IPOB) stating that they had abandoned peaceful agitation and had now fully taken up arms.

At the event were Governor Ifeanyi Ugwuanyi of Enugu State, and the Deputy Governors of Ebonyi, Abia, and Imo States.

The IGP’s speech in full: “It is with a deep sense of commitment to the spirit of the Constitution of the Federal Republic of Nigeria and our policing mandate that I address you on this occasion marking the flag-off of a Special Operational Action Plan which is code named ‘Operation RP’ for the stabilization of the security order in the South East Geopolitical Zone of our dear country.

The people of South Eastern Nigeria are historically known to be peaceful, tolerant, innovative, industrious and entrepreneurial. They are highly respected citizens that have made their marks in the field of academics, scientific inventions and commerce. They are a unique ethnic group that freely and peacefully live with others across the country and within the South East. Unfortunately, events of late have altered this positive narrative.

The Zone in recent years has been witnessing increasing cases of kidnapping, armed robbery and communal violence. This trend has of late been laced with inter-ethnic intolerance and separatist agitation as championed by the Indigenous People of Biafra (IPOB) and its armed wing, the Eastern Security Network (ESN).

The separatist agenda of this group has assumed an armed dimension in which important political and community leaders as well as personnel and assets of the Nigeria Police, Military and other security agencies are being constantly targeted in clearly well-coordinated, premeditated violent attacks in the region. Aside from this, the deepening inter-ethnic prejudice and intolerance in the region is also occasioning unjustifiable inter-ethnic violence and counter-violence. Apart from the massive loss of property and fatalities to lives, the violent campaigns are beginning to have a damaging effect on the socio-economic development of the region.

This trend is being compounded by the illegal proliferation of firearms as well as the deployment of the social media by the leadership of IPOB to indoctrinate, misinform, and misdirect south easterners towards the path of violent separatism. This evolving trend constitutes a major threat to our nation’s internal security and national unity and, hence, requires urgent sets of all-inclusive actions in order to roll back the disastrous tide.

Violent agitation and associated crimes, particularly, those that endanger the lives, property and livelihood of the civil populace and threaten our national unity, peace and security in the form being currently noticed do not and can never represent our traditional values as a people. Unfortunately, the current armed campaign by the Indigenous People of Biafra (IPOB) and the Eastern Security Network (ESN) is constituting a major threat not only to these values, but to our national security and peaceful co-existence as a nation.

Indeed, the resort to terror tactics, disregard to constitutional processes and disrespect for democratic standards to advance their interests of creating an ungovernable space in the region informed the decision of the Federal Government to outlaw IPOB.

In spite of this, and despite the concerted efforts of State Governors, revered Traditional Rulers, religious Bodies and well-meaning personalities in the Zone, the group continues to widen their armed insurrection and destabilising campaigns with fatal consequences. This they are doing without regard to the fact that no nation develops to its optimal potential in an environment where constitutional governance and national harmony are threatened by violent insurrection as being championed by them.

The key factor in addressing the prevailing security threats in the South East is that we should as a people, be determined to build a consensus, partner in condemning any act of criminality, and resolve to work with the Police and other security agencies towards identifying, isolating and bringing the criminal elements within our communities to deserved justice.

There must come a time in the life of a nation when we, as a people, must strengthen our will, and resolve to mobilise and deploy all our assets towards confronting these criminal elements, take the battle to their doorsteps, and make a clear statement that the few deviants within us cannot and will not re-order our cherished national values. The time is now. Today’s launch of ‘Operation RP’ by the Nigeria Police is aimed at this direction and it follows the directives of Mr. President to the Nigeria Police to re-evaluate and emplace new operational strategies to stem the tide of violence and secessionist agenda not only in the South East but across the country.

As the lead agency in the internal security framework of this country, the Nigeria Police under the current dispensation acknowledges that the duty of securing the lives and property of the citizens is its primary mandate. This responsibility imposes on us the obligation of upholding the dictates of the Constitution, restoring peace and order where they are threatened and protecting the citizens from any form of threats to their lives and values. The ‘Operation RP’, the launch of which we are witnessing today, was conceptualized to achieve these goals.

While we shall do all within our powers and means to achieve these tasks, we do acknowledge that we cannot do it alone. Indeed, no Police agency anywhere in the world, no matter how well-trained, equipped or motivated, can solely achieve its security and safety mandate without the support of the community. Consequently, we shall be collaborating closely with the Armed Forces, the intelligence community and other sister security agencies in this operation. In order to fully achieve the objectives of this special operation we also solicit the full support of the civil populace, particularly, traditional rulers, religious leaders, youth associations, market bodies, cultural associations and professionals among others.

Permit me to also use this opportunity to specially appeal for the support and understanding of media practitioners across the print, electronic and the social media. While their roles in advancing the freedom of information principle is appreciated, patriotism and ethical values place an obligation on them to avoid sensational and unverified reportage on internal security operations. This is because it can mislead and create unjustifiable sense of insecurity among the citizens, while unwittingly advancing the interests of the criminal elements.

The launch of ‘Operation RP’ in Enugu today is the first in the line of our strategic Action Plan to restore peace across the country and in the coming days the special operation will be extended to other parts of the country to address peculiar crimes including banditry, kidnapping and armed robbery in other geopolitical Zones. It is to be emphasized that ‘Operation RP’ will cover all the States within the South East Geopolitical Zone. I am confident that with the support of all strategic stakeholders, the operation will in due course, change the current security narratives in the Zone for good.

I want to at this juncture, solemnly recognize the sacrifices that police personnel across all Commands in the South East have been making in furtherance to their resolve to sustain the unity of the country and restore peace and security in the South East. For those that have gallantly paid the supreme sacrifice and the injured, I can assure that you are the true heroes, heroines, and patriots whose names shall remain inscribed in the golden sand of history.

To the police officers and men deployed on this special operation, I charge you all to see your deployment as a call to national duty. The Force leadership and indeed, the entire nation are looking out for two major outcomes as you discharge your duties during this operation. First, to stabilize the security order in the South East in the shortest possible time. Second, to be professional in your conduct as you strive to attain this objective.

This requires that you respect the rights of the citizens and undertake the operation within the dictates of rule of law. You are charged to be civil with the law-abiding citizens, but firm and ruthless with criminal elements and secessionists that may attempt to take the risk of testing your will or threatening the citizens within your Area of Jurisdiction.

In furtherance to the goals of this special operation, I charge you to henceforth, defend yourselves courageously against any armed group that attempts to attack you, any police assets, and other critical national infrastructure. As you set out on this operation and rededicate yourselves to the service of our Fatherland, I commit you to the safe hands of Almighty God.

I duly recognize and immensely appreciate the individual and collective efforts of all the South East Governors towards supporting the Police in restoring security and in strengthening national unity. As we set out to formally launch ‘Operation Restore Peace’ otherwise code named ‘Operation RP’ in Enugu on this day, I pray that the Almighty God should restore peace across the South East and in our beloved country. I thank your Excellencies and all our guests for your attendance.”

Buhari to AFDB President Adesina: I Will Stand by You