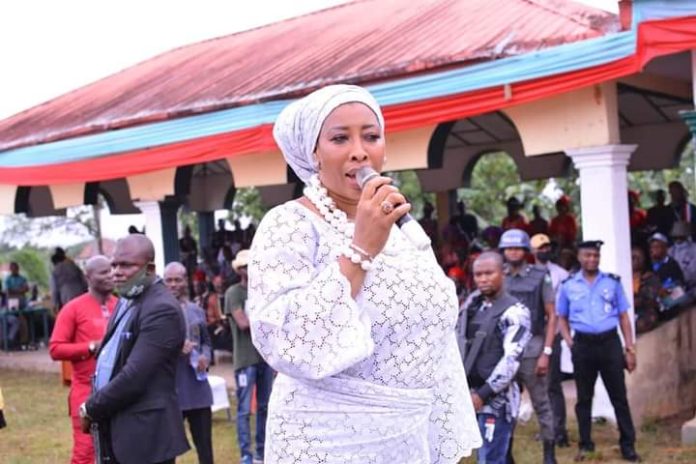 Recall that in the 2019 general elections, the People’s Democratic Party (PDP), lost the Bende North State constituency seat, as well as that of the Bende Federal Constituency seat to the APC.This defeat went further to affect the chances of the PDP in winning the Abia North Senatorial seat, because Bende LGA is the gateway to the Abia North zone, being one of the largest local government area in the zone.

Ukeje said she is aware of how important the Bende council area is to the PDP and assured that she would regain the area for PDP come 2023.

She revealed that the opposition party took advantage of the internal crisis that rocked the PDP in the area during the 2019 elections to win their elections. This she said, put her away from Abia politics for close to two years.

The lawmaker disclosed that the grand civic reception in her honour, necessitated her return to the state and she is ready to take over the Bende area for PDP.

In her speech, the quintessential leader, Nnenna Ukeje, said Bende is very important to her, as the local government area is the gateway of Abia North Senatorial zone.

She revealed that she has the responsibility of rebuilding Bende and that she must deliver come 2023.

Meanwhile, Ukeje maintained that any opposition party in the area, using her party, the PDP, to shine, should be ready to face her politically.

She added that her return would rebuild the PDP in the area, reaffirming that Bende is a PDP stronghold and come 2023, the party would retire any opposition in the area.

Similarly, during the grand civic reception, Bende indigenes, as well as major stakeholders of the state, expressed joy and delight over the return of the commander of Bende Politics.

In an interview with the press, the Executive Chairman of Bende Local Government Area, Chief Emmanuel Onwuchekwa, described Mrs Ukeje as a woman that saw tomorrow.

According to the LGA boss, the ex federal lawmaker, had a direct touch on the lives of the people, with several programmes and projects that cut across human development being delivered. This he said, nicknamed her ‘Ada Bende’

The chairman disclosed that Bende people decided to roll out their drums in receiving the Amazon in a civic reception, going by the instructions from the State Governor that all LGA chairmen should endeavor to bring back aggrieved members to the party.

Onwuchekwa expressed joy that the ex lawmaker is back to help rebuild PDP in the area.

The Deputy Chairman of Bende LGA, Hon Promise Uzoma Okoro, described Hon Nnenna Ukeje as a commander of Bende first eleven, saying that the political prowess exhumed by the ex lawmaker, shows she is a powerful political figure. He added that come 2023, Bende is ready to support her political ambition.

The Leader of Bende Legislative Council, Hon Acho Udensi, commended the contributions of Hon Nnenna Ukeje towards the development of Bende politics.

According to Udensi, the ex lawmaker contributed immensely to the welfare of ndi Bende through her empowerment programmes for the youths and women, as well as her yearly distribution of Agricultural farm inputs like cassava stem, improved seedlings, bags of fertilizers, insecticides, among others.

The leader, however, lauded the the ex lawmaker, saying with her return to the state, the 2023 elections would be a smooth ride for Bende PDP.

Also, Deacon Iyke Uchella, a PDP member, said Hon Nnenna Ukeje is the only person that can take Bende to the enviable height, as a crusader of good governance and inclusive politics.

Uchella, while appreciating the organizers for putting up such a warm reception, thanked the Governor, Dr Okezie Ikpeazu, his deputy, Rt Hon Ude Oko Chukwu, the speaker of the Abia Assembly, Rt Hon Chinedum Orji, for gracing the event, saying that Ukeje’s return would make a difference in Bende politics.

Another Bende Son, the Coordinator to the Abia State Governor on Accelerated Rice Development Program, ‘Osikapa Abia’, Pastor Okechukwu Dike, described the ex lawmaker as an epitome of beauty, a woman that remembered her people both in job creation and infrastructure development when she was in power.

Pastor Dike used the occasion to advise political office holders to always use their position to uplift the downtrodden and add value to people in the society, so that they could be remembered some day.