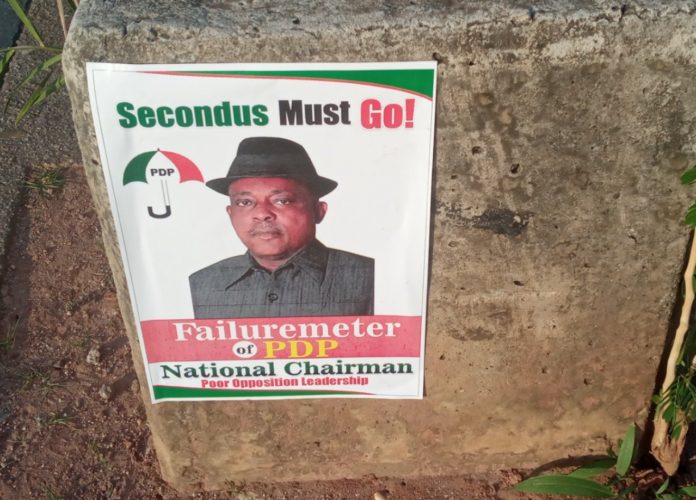 The Chairman of the Peoples Democratic Party (PDP), Uche Secondus is on the last lap of his tenure, however, his second term ambition is already tearing his party apart, findings reveal.

With about 12 chairmen in less than 20 years, the PDP chairmanship position appears to be the hottest. Due to different factors, Secondus has so far had a smooth tenure until recently when his time is winding down and the question of the second term is coming up.

Afegua, a chieftain of the party from Edo State, accused the NWC of mismanaging N10billion accruing to the party. Meanwhile, criticism of Secondus came from the unlikely source, Nysome Wike, the governor of Rivers State.

Back in 2020, Wike who is believed to be the godfather of Secondus criticized the Secondus-led NWC for not being ready to win the 2023 elections. Wike is believed to be nursing 2023 ambition, either as flag bearer or running mate.

While the NEC vote of confidence on the PDP chairman could suffice for the meantime, his ambition still depends on the 2023 permutation. The party is still mulling the rotation of the presidential seat for the next election. Although, Bala Mohammed-led committee recommended an open ticket, with more consideration for the Southeast and Northeast zones.

According to insiders, the recommendation of the Bala Mohammed’s committee on zoning does not favour Wike, who is believed to be in favour of the Sokoto State Governor, Aminu Tambuwal to run for president, while he will serve as Vice.

Wike supported Tambuwal in 2018 for the PDP ticket at the Port Harcourt convention, however, Atiku Abubakar clinched the ticket. Events in post-2019 elections have shown that Wike, despite the report of him being a major financier of the party, has struggled to have his way. Kingsley Chinda, his choice for the Minority Leadership position, was defeated by Ndudi Elumelu.

Back in 2019, the PDP nominated Chinda for the minority leadership position, but a rebellion by the Elumelu and members of some minority parties in the House of Representatives thwarted Chinda’s nomination.

Despite the threat of disciplinary actions against Elumelu and co, the PDP failed to reverse that event. Some lawmakers back then argued that Wike, who is from Rivers State, cannot take the PDP chairman and still gets another Rivers person as minority leader.

The remains and the bedrock of the PDP are 6 out of 6 governors being of the opposition party. Most importantly, aside from Governor Godwin Obaseki, all other governors in the South South region are in their second term. They will have two challenges, securing their future and handing over to a preferred candidate.

For their futures, the senate is one option or could look at federal executive position such as president, vice or even ministerial position in the event their party takes control at the centre. Presidential ambition could be a little overstretched in this region, considering the fact that Goodluck Jonathan from Bayelsa State served 5 years and some months.

Either of the options that the incumbent governors are considering, will require having the support of the National Working Committee of the party. This was not tested in 2019, because all the governors were seeking second tenure and got automatic ticket. Now, the governors are in a different predicament. Therefore, the fate of Secondus could hang on the decision of these governors.

The South East geopolitical zone is hanging its bid for the top job on moral principle. The recommendation of the Bala led committee has not addressed the call for micro zoning of the position. The region has been very loyal to the opposition party from 1999-2019.

However, in voting capacity, the region has the least voting strength. In addition, there are only PDP governors in the region, Okezie Okpeazu of Abia and Ifeanyi Ugwuanyi of Enugu State. While APC has Hope Uzodinma of Imo State and Dave Umahi of Ebonyi State, with APGA having Anambra’s Willie Obiano.

The regional ambition of the Southeast could determine the second tenure of Secondus. In 2019, the relationship between heavyweights in the region were not tested, save for a little skirmish over the choice of Peter Obi as running mate to Atiku. According to reports, the governors favoured the former governor of the Central Bank of Nigeria, Charles Soludo, however, it was learnt that Atiku tapped Obi himself.

The region could be disposed to a chairman that is committed to micro zoning.

It seems like these two regions are not in contention for the PDP ticket. Both regions are APC strongholds.

The North East ordinarily should not be in contention for the presidency in 2023 based on PDP zoning arrangement policy. However, the ambition of ex-vice president, Atiku Abubakar still looms large over the party. And many insiders within the party view Atiku as a safe option to wrestle power back from the APC.

Northeast has the largest voting capacity after Northwest, even though the region has been voting APC in two election cycles, but PDP made some significant inroads during the last election, PDP flipped Adamawa and Bauchi States.

Currently, PDP has Bauchi, Adamawa and Taraba, and in the event that Buhari is not on the ballot, many fancy Atiku’s chances against any candidate of the ruling party.

This region is another region that ordinarily would not be in contention, but report of Wike pulling his weight behind Tambuwal and the voting prowess of the Northwest means the region could be in contention for the PDP ticket. Although, the fact that Buhari is from the northwest could be a serious impediment.

Former Senato,r Rabiu Kwankwaso is another contender for the PDP ticket.

This multiple interests make the decision on Secondus second term difficult and complicated.

On Tuesday, posters calling for his resignation also flooded Abuja with the inscription of “Secondus must go.”

The Spokesperson of the PDP, Kola Ologbondiyan, did not respond to request for comment on the embattled chairman, he referred newsmen to Ike Abonyi, the media aide of Mr Secondus.

Abonyi did not pick calls placed to his phone, and did not respond to the message sent via SMS to his line.

Why PDP Convention Is Holding Amid Tight Security – Aliyu