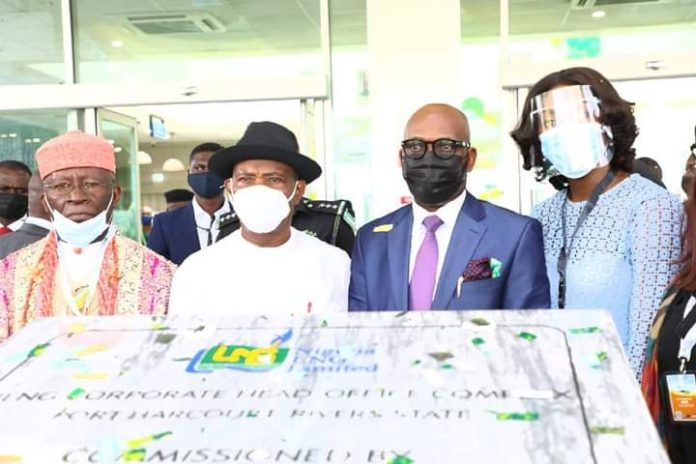 Governor of Rivers State, Nyesom Ezenwo Wike has accused international oil companies of being part to a conspiracy theory that the Niger Delta is unsafe in order not to relocate their corporate headquarters to the region.

The governor observed that so long as this kind of negative narrative geared at perpetuating injustice is not addressed, the country’s corporate existence and stability will continue to be threatened.

Governor Wike made these assertions at the official commissioning of the Nigeria Liquefied Natural Gas (NLNG) corporate headquarters sitting on 126,060 square meters in Port Harcourt, the River State capital on Wednesday.

He noted that for several years multinational oil companies and some vested interest groups have been promoting the negative narrative that Niger Delta is not safe to legitimise their sheer refusal to relocate their corporate head office to the region.

The governor said it is morally offensive for oil companies to continue to exploit oil and gas in the Niger Delta and locate their headquarters elsewhere in the country. According to him, the claim that the Niger Delta is unsafe is not tenable.

“Understand that this conspiracy theory against the Niger Delta is a temporary thing. I can assure you, one day everybody will come back to their operating base. Nobody can change it.”

Governor Wike challenged the multinational companies to prove if Lagos and Abuja don’t have security issues as the rest of the country today. He maintained that the idea of flying in oil workers from Lagos to work in the Niger Delta and then fly them back is detrimental to the nation’s economic wellbeing.

The governor commended NLNG for showing the right example by relocating its corporate headquarters to Rivers State which is its operational base and assured the management that the State government will continue to create an enabling environment for the businesses to thrive.

Governor Wike further thanked the company for funding the 38 kilometers Bonny-Bodo road project of which the Federal government was expected to provide counterpart funding. He said it was unfair for the federal executive council to approve over N780 Billion for the Abuja-Kano highway, but refuse to provide counterpart funding of just N60 Billion for the Bonny -Bodo road project.

“There is so much injustice in the country and if you don’t correct it , there will continue to be problems. Injustice brings insecurity whether you like it or not. When a people feel they are not part of the sharing of our national cake, what do you want them to do?”

The managing director of NLNG, Tony Attah said the iconic edifice is intended to convey the company’s bold presence in Port Harcourt and the Niger Delta region.

He expressed delight the company is driving Nigeria’s gas revolution and investing huge resources in human capacity development in its host communities.

The Minister of State for Petroleum Resources, Timipre Sylva, thanked the NLNG for playing a very crucial role in the country’s gas expansion project. According to him, for decades, the NLNG has demonstrated commitment to country’s aspiration to be a leading gas producer in the world.

Former managing director of NLNG, Chima Ibeneche said he initiated the move to relocate the NLNG corporate headquarters from Lagos to Port Harcourt because it was just thing to do.