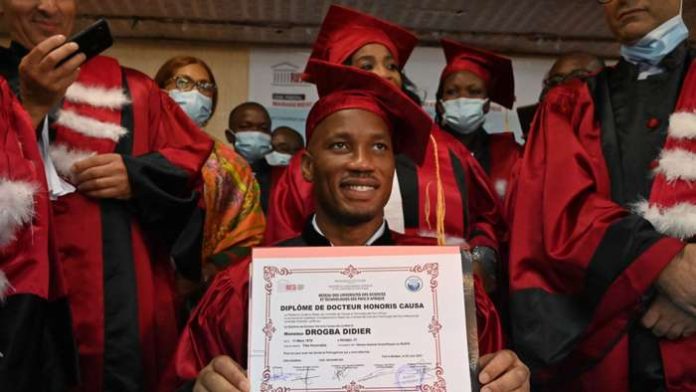 The two-time African Footballer of the Year has been honoured for his charitable work and his role in bringing stability to the West African country.

Former Chelsea and Ivory Coast striker Didier Drogba has been awarded an honorary degree by the University of Sciences and Technology of Africa network (Rusta) in Abidjan.

The 43-year-old was recognised for his outstanding contributions to peace in his home country and his charitable gestures to humanity.

Drogba, in the company of his mother Clotilde Drogba, received the degree in person at the university premise on Thursday.

He is currently Ivory Coast all-time top scorer with 65 goals and he has led several life-changing programmes for children through his foundation as well the construction of infrastructure for the health sector.

Back in 2005, Drogba halted a civil war in Ivory Coast which had spanned three years after they secured qualification for the 2006 Fifa World Cup with a 3-1 win over Sudan.

After the match in Omdurman, cameras were allowed into the Ivorians’ dressing room and the former 2006 and 2009 African Footballer of the Year appealed for peace in the country.

Last October, Drogba received the 2020 Uefa President’s award from Aleksander Ceferin for his ‘commitment to excellence on and off the pitch’.

“Didier is a hero to millions of football fans for his achievements throughout his glittering playing career,” Uefa president Ceferin said.

“He is a leader – a pioneer. I will remember him as a player for his skill, strength and intelligence, but above all for his insatiable appetite to succeed – a trait which is just as present in his desire to help others off the field of play.

“The Uefa Champions League has become the greatest club competition in the world, partly due to our clubs being able to attract the best players from around the world.

“We have been lucky to have seen the likes of George Weah, Samuel Eto’o and Didier Drogba play at the very highest level.

“They in turn, have blazed a trail for African footballers and have given inspiration to a whole new generation to look to follow in their footsteps.”

Drogba led Chelsea to win their maiden Uefa Champions League trophy in 2012 after scoring the match-winning strike from the penalty spot.

He won four Premier League titles, four FA Cups and three League Cups in England before moving to Turkey to win the Super Lig, the Turkish Cup and the Super Cup with Galatasaray.