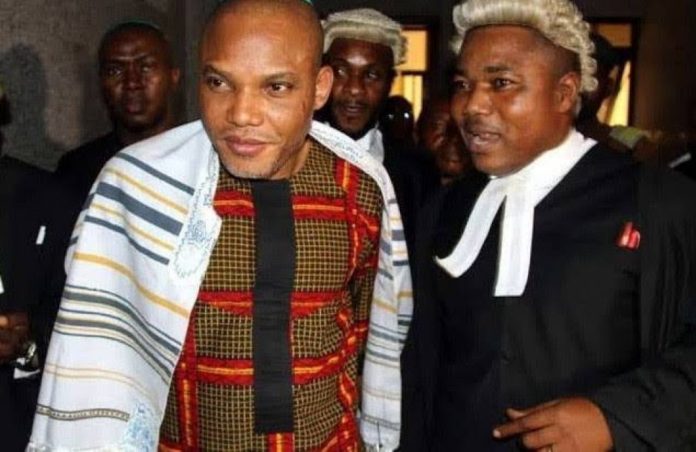 The Indigenous People of Biafra, Sunday warned the Federal Government and the Nigerian Armed Forces, to desist from further harassment of innocent people in the South East, including IPOB’s lawyers, otherwise, there will be crisis.

The warning follows the alleged early hours of Sunday invasion of the home of its lawyer, Mr Ifeanyi Ejiofors, in Oraifite, Ekwusigo Local Government Area, Anambra State, by a combined team of Police and soldiers of the Nigerian Army.

A statement issued by IPOB’s Media and Publicity Secretary, Emma Powerful, alleged that at about 2.,15 am, Sunday morning, a combined team of the Police and soldiers of the Nigerian Army, invaded and surrounded Mr Ejiofor’s country home, shooting sporadically as they did on December 2, 2019, alleging that many lives may have been lost in the latest wee hours invasion of Ejiofor’s Oraifite home.

According to IPOB’s statement, Mr Ejiofor raised the alarm at about 2.15 am to the leadership of IPOB that his life is under threat, as a team of Police and Army are presently in his house shooting sporadically on sight to arrest him.

IPOB gave Ejiofor’s statement as, “Alert- A joint team of Police and Army are presently in my house shooting sporadically on sight, to arrest me. As a lawyer, I have committed no offence known to the law. My life is under threat, people are being killed and I don’t know what will happen to me next.”

However, IPOB’s statement read in part, “This is 2.30 am time, a combined team of Police and Army currently surrounded Barrister Ifeanyi Ejiofor’s country home, is it an offence for someone to defend IPOB as its lawyer. Barrister Ejiofor is doing his job as a lawyer, where in the world is a legal practitioner would be harassing because he represents an organization as their lawyer.

“The Nigerian Army invaded and burnt his house on 2nd December 20 19 and killed more than 10 people. Since then they are still trailing and harassing him. The whole world must hear this because the Nigerian government must get what they are looking for from IPOB.

“Barrister Ejiofor’s house is been invaded by Fulani Jihadist soldiers now and they want to eliminate him, the world must hear the evil this country and her security agencies are committing. This is becoming their new normal, nobody should blame IPOB, for the consequences of what will follow the possible be a limitation of our lawyer, Ejiofor by Nigerian armed forces. A world is enough for the wise. South-East has not come out of the consequences of Ikonso’s murder by Nigeria security agents.

“We call on South-East Governors to call the Nigerian armed forces operating in their States to order now because they will be the ones to bear the consequences of the ongoing killings, intimidation and harassment of South-East youths and professionals discharging their legitimate duties.”