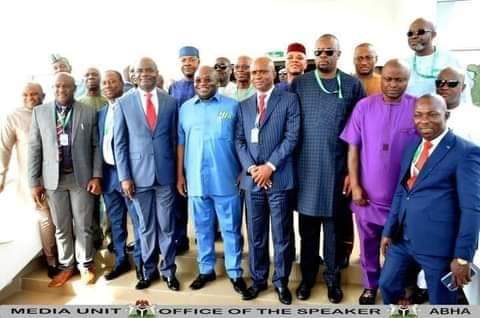 Speaker of the 7th Abia State House of Assembly, Rt Hon Chinedum Enyinnaya Orji MNSE, has attributed the widely acknowledged achievements of the State Assembly to the immense support he receives from Governor of the State, Dr Okezie Ikpeazu, his Colleagues at the Assembly, stakeholders and Abians in general.

The Speaker stated this today on the occasion of the second year anniversary of the 7th Abia State House of Assembly which was inaugurated on June 10, 2019.

“First, let me thank the Almighty God for life. Without life, we can achieve nothing. I also thank my family for their prayers and understanding. I wish to express my sincere gratitude to the Governor, Dr Okezie Ikpeazu, my Colleagues at the 7th Abia State House of Assembly, the youths, the women and very important stakeholders in Abia for the modest success we have achieved so far in this my time as Speaker” he said.

The Speaker extolled Governor Okezie Ikpeazu for rebuffing malicious propaganda brought against him but trusted in his ability to perform, and commended the Governor for his infrastructural development strides recorded so far. He also lauded his Colleagues at the 7th Assembly for reposing their confidence in him, pledging to always stand by them; and the good people of the State for their belief that the Abia State House of Assembly (ABHA) Members will always carry out their oversight functions without fear and devoid of confrontation.

The Speaker then went ahead to assure Abians that he and his colleagues at the ABHA are committed to continue making good laws that will be of benefit to the State and her people, and also continue to deliver on projects which his colleagues are currently embarking on across the 24 State Constituencies of Abia.

“Let me assure once again that no form of distractions, no matter how relentless they are, will deter my colleagues and I from delivering on these set objectives”, he concluded.

Governors Still Sidelined In The Affairs Of NDDC Says Wike