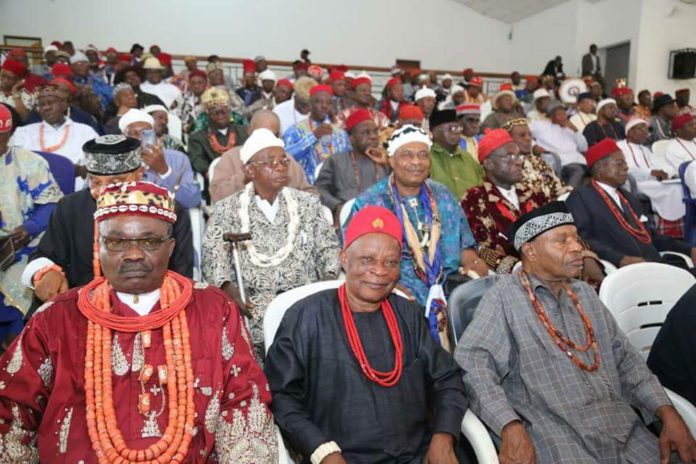 On Thursday Association of South-East Town Unions, ASETU, has taken on President Muhammadu Buhari over his threat to visit the various agitators in the zone in the language they understand.

ASETU said the killings going on in the Southeast would not be swept under the carpet, stressing “we have taken a decision that this will not be limited within the shores of Nigeria.

“We have set up groups to make compilations of these abuses, and once they are done, we have professionals that will tidy the report up and we will head to the ICC. Definitely, these atrocities will not be swept under the carpet.”

This is coming after Buhari said those causing disturbances in the Southeast were ignorant of the civil war and the lives lost.

Also on Thursday, President Buhari said the secessionists in the Southeast had nowhere to go and that he would send the military after them.

There have also been widespread reports that security agencies were allegedly killing innocent youths in the Southeast under the guise that they were members of the IPOB’s Eastern Security Network, ESN.

Addressing journalists on Thursday shortly after the ASETU emergency meeting in Enugu, its National President, Chief Emeka Diwe re-echoed that security forces were committing all manner of human rights violations in the zone.

He said while war had been declared on Ndigbo, with several lives being wasted, killer herdsmen were carrying on their carnage unchallenged. 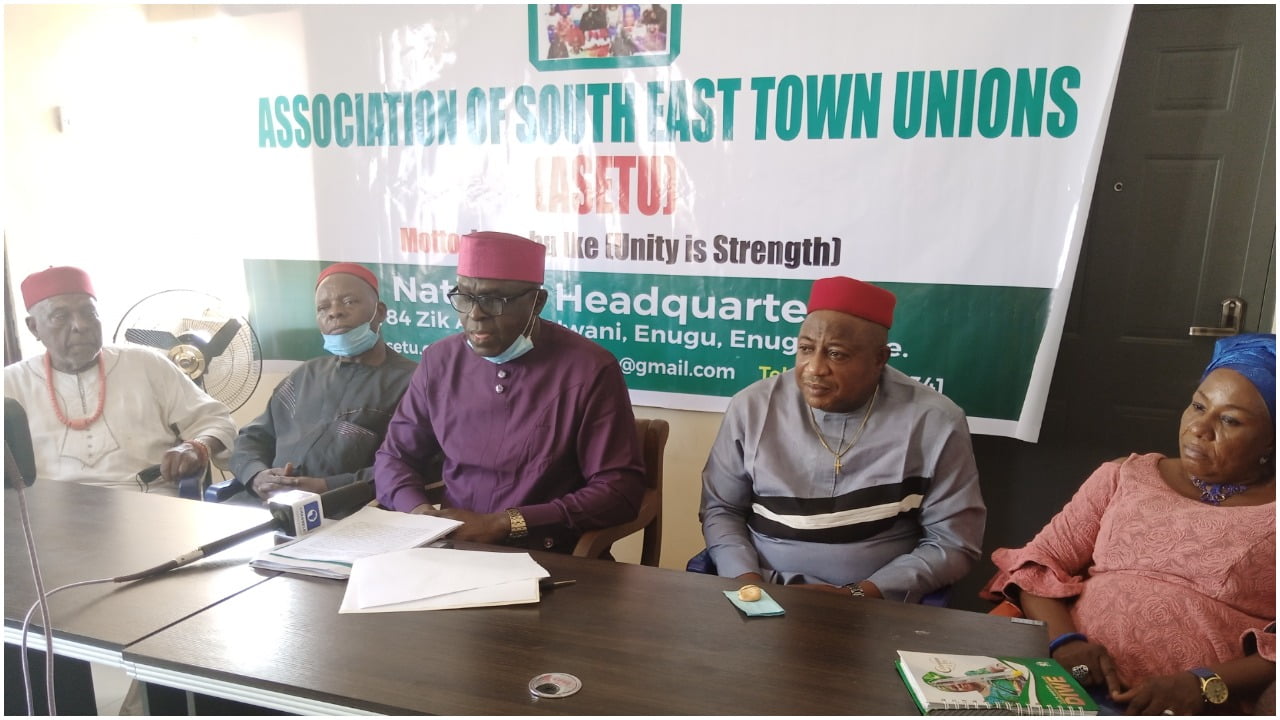 ASETU, however, also condemned the destruction of public facilities in the zone by unknown gunmen.

The speech reads in full:

“Nigeria has lately been mired in serious security challenges. Terrorists, armed bandits and killer herdsmen have continued with their destructive activities in various parts of the country even with an overwhelming audacity. In Igboland, the security situation has deteriorated, especially in the last few months. The carnage against the poor, defenseless and vulnerable rural dwellers by invading armed Fulani militiamen who masquerade as herdsmen has gone on unabated and unchecked.

This festering insecurity has taken a new and totally condemnable dimension with the rampant shootings, killings and arson that have now engulfed our land. Strategic public facilities, including security edifices and INEC offices, have been razed, and law enforcement personnel ambushed and murdered.
This inferno has also claimed countless civilian lives, and even life itself has become a misery in many parts of Igboland today. The local economy in our region is now in tatters, and agricultural productivity has further been gravely hampered by the onslaught of the armed Fulani herdsmen in our bushes and forests. All these are unacceptable to us.
As Ndiigbo, the Town Union is our statutory decision-making structure. It has remained the expression of our genetic democratic spirit since the beginning of our history. The Town Union system is what binds us together, and it is the nearest administrative unit to the people which runs the daily affairs of the communities and ensures development, peace and security even in the remotest parts of our land. Every genuine Igbo person is a member of the Town Union by birth.

The Association of South East Town Unions (ASETU), therefore having widely consulted with and collated the views of the leaderships and the Town Unions, and working in concert with many other respected Igbo groups, which include Nzuko Umunna, Aka Ikenga, Igbo World Assembly, World Igbo Congress, Alaigbo Development Foundation, Ekwe Nche, European Igbo Communities, Igbo Board of Deputies and Council of Igbo States in America etc., deemed it pertinent to convoke a one-day emergency security meeting. We hereby wish to make the following resolutions public:

We totally condemn the continued attacks by killer herdsmen in our land. The inability of the security operatives to track and bring these merchants of death to justice over the years has remained inexplicable and totally unacceptable to us. This has fuelled deep anger and mistrust in our land. We therefore commend our Governors for finally paying heed to our calls for the proscription of open grazing of cattle in our land. We acknowledge the efforts of the Governors who have put machinery in motion for the enactment of the anti-open grazing laws. We therefore urge the rest of them to immediately send Executive Bills to the respective Houses of Assembly in Igboland for the enactment of these laws so as to give legal weight to the proscription already pronounced and bring the murderous activities of the killer herdsmen to an end. We equally urge each state to have forest guards with legal backing to ensure that our forests do not harbor terrorists and criminals.

The killing of policemen, soldiers and other law enforcement personnel as well as the burning of key national security and political infrastructure that have recently been witnessed in our land are very reprehensible acts which we totally and unequivocally condemn. Igbo culture abhors the resolution of any question through bloodshed. It is troubling that the progress which Igboland has begun to record with the launch of the Aku Ruo Ulo investment initiative has been rolled back through these very anti-Igbo activities. We therefore call on all those who indulge in such retrogressive enterprise to have a rethink and immediately retrace their steps in the overall interest of Ndiigbo. The Federal Government and the leadership of the security agencies should immediately withdraw the very draconian orders given to security operatives in Igboland which have led to the ongoing profiling of Igbo youths, mass arrests, extra-judicial killings and human right violations in our land, especially in Imo State. We find it germane to underline our support for peaceful self-determination initiatives. People have the right to insist on restructuring or even asking for a new country, provided this is done peacefully.

We are appalled by the statement made by President Muhammadu Buhari in which he threatened to respond to Ndiigbo in the language of the genocidal civil war of 1967-1970 which consumed over three million innocent Igbo lives. This is just another strong act of insensitivity from the President given his litany of non-inclusive and discriminatory actions against Ndiigbo. It is appalling that President Buhari who has never spoken strongly against the atrocities of the Fulani herdsmen and bandits is threatening to visit another festival of blood on Igbo people. We demand that he retracts that statement, tenders an apology to Ndigbo and puts off all arrangements geared towards enforcing that genocidal threat. We equally wish to put the United Nations, the International Criminal Court, the African Union, ECOWAS, United States of America, the European Union, the United Kingdom and Israel on notice of the public encouragement given by the President to uniformed officers and the general public to engage in genocidal behavior against Ndiigbo.

The rise of non-state actors to defend Igboland indicates a gross inadequacy in governance. The political leaders must step up their efforts to offer satisfactory leadership to the people. Our Governors must rise to the occasion and protect our people. They must rededicate themselves to delivering the primary purpose of political governance, which is the security of lives and property. The Governors should make judicious use of their security votes and security apparatuses to ensure that the situation in our land is promptly addressed in their capacities as the Chief Security Officers of their States. Further, there is an urgent need to revamp and upscale the capacity of the already existing self-help community security initiatives, like the vigilante groups and neighborhood watches, which our people at the grassroots have over the years trusted for the safety of their lives and property. To this end, States that have not passed neighborhood watch laws are urged to do so immediately in order to give legal backing to them. We equally urge the state Governors to immediately work with the state assemblies and pass regional security laws for the south east given the regional nature of our challenges. We urge the State Governors and Assemblies to ensure that in the shortest possible time we have a robust and fully operational regional security system which builds on the neighborhood watches and vigilantes and is fully manned by locals from the topmost personnel to the lowest officials in order to be accepted by Ndigbo. In addition, it must not be or be seen to be politicized in any shape or form.

We call on the private sector in Igboland to support the setting up of public-private-community trust funds for security so that we can have 21st century security systems to ensure that lives and property are well protected in both urban areas and in rural communities. This will complement the judicious use of security votes by the state governments.

The activities of some criminal elements who have lately capitalized on the ongoing chaos to perpetrate all manner of crimes in our land are totally unacceptable. We urge our Traditional Rulers and our people to always provide intelligence to their community vigilantes and neighborhood watches for onward transmission to the appropriate law enforcement agencies so that the activities of these criminal elements could be nipped in the bud and the perpetrators brought to justice.

We hereby launch the Igbo Human Rights Violations Portal (IHRVP), whose mandate includes the collation of details of all victims of the killings by Fulani herdsmen, extra-judicial murders and other human rights violations in Igboland for onward action in the International Criminal Court. This will be coordinated in conjunction with the State Bar Associations in Igboland and volunteer senior legal practitioners and activists.

Finally, we call on the Federal Government to immediately convene a National Dialogue so as to resolve the many fundamental questions which have continued to breed crises in Nigeria and fan the embers of insecurity thereby posing serious threats to the lives and livelihoods of the people.”