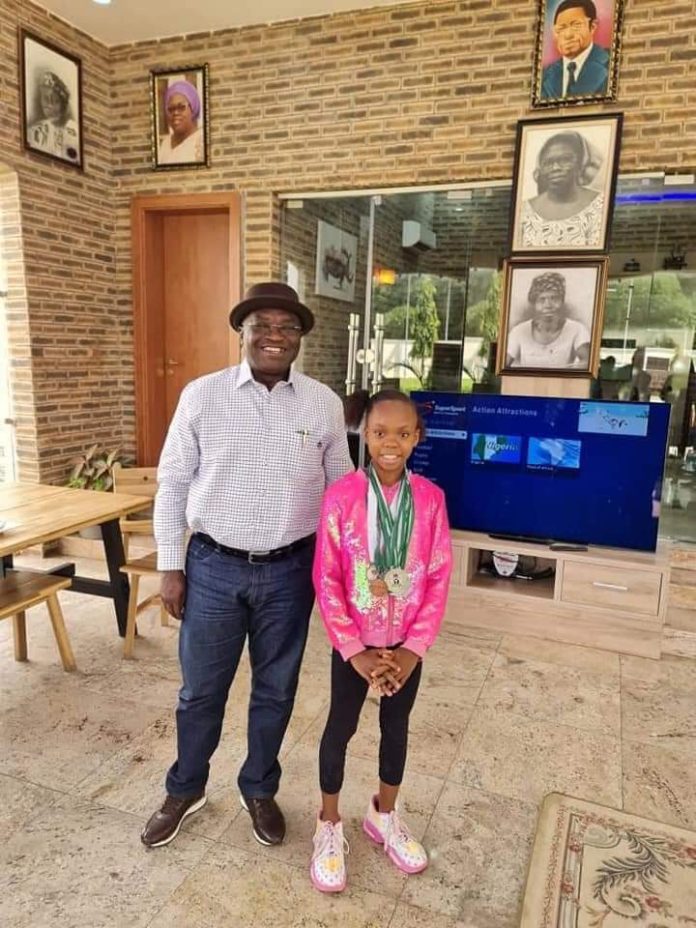 …Pledges Support For Her

Governor Okezie Ikpeazu says that his administration will not hesitate to stand behind any Abia child that exhibits extraordinary skills in any area of life, especially in sports.

The Governor who stated this today when he received one of Nigeria’s best gymnasts, 10 year old Miss Stephanie Ogechukwu Onusiriuka expressed delight that the little girl is blessed with prodigious talents which she has fully explored to bring glory to herself, her family, Abia State and Nigeria.

Governor Ikpeazu noted with pride that the little Miss Onusiriuka had won a gold medal for Nigeria at the 2019 African Level System Gymnastics Competition in South Africa when she was just 8 years old.

At the last National Sports Festival, Edo 2021, she won 1 gold, 2 silver and 1 bronze medal, and was crowned 2nd best Gymnast in Nigeria.

The Governor assured that she will be supported to get all the exposure she needs to develop noting that her talents couid take her to the highest level of international recognition. He announced a donation of 5 Million Naira to assist her parents pay for her to participate in an international training in Europe next month.
The Governor asked the parents to keep him updated on the progress of the girl, going forward.
The Governor described Miss Onusiriuka as a source of inspiration for other Abia kids and commended her parents, Engr and Mrs Onusiriuka for identifying the talents in their daughter and supporting her to nurture it. He challenged parents to take closer looks at their children and identify those with special talents.

The gymnastics champion later thrilled the Governor with a display of some of her skills.

Little Miss Onusiriuka, who hails from Olokoro in Umuahia South LGA was accompanied by her parents and her aunt, Mrs Adaku Uwaoma Onusiriuka Oseiza.