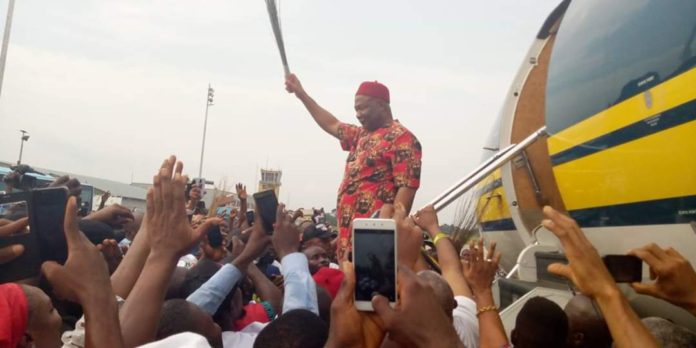 On Wednesday the Association of Imo Sweepers (AIS) led by one Mrs Treasure, has protested six months unpaid salary.

The sweepers comprising widows from the 27 LGAs of Imo State, stormed the Government House, demanding their salaries arrears.

A woman who spoke for the chairman, said that the Uzodinma-led government has suffocated them to death since its inception.

According to her, the government had continued to pay lip service without considering their plight as widows.

“This government is insensitive and callous. Do you know that November and December salaries for last year were not given to us?

“No Christmas gift, no bonus. We went home for the Yuletide empty handed.

“As if that was not enough, they promised to start paying in January this year. This month is June and no one has received a dime from the government.

“Sweeping the road every morning is not an easy task. Many of us have been hit by speeding cars, and some have died as a result of that. Yet, government is not taking us seriously.

“We don’t have husbands that can fend for our families. We all depend on this monthly salary to survive. The government should try and consider our plight and pay us.

“Some of us have incurred huge debt. We need money to offset our bills and fend for our families.”

She said the association would embarked on mother of all protests soon if the government fails to pay them.