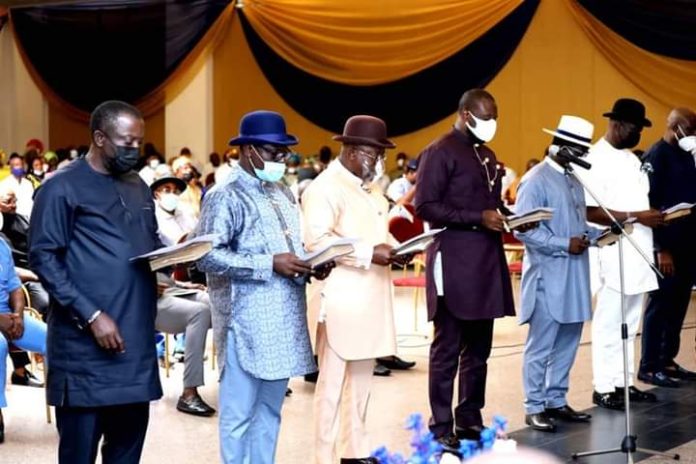 Governor of Rivers State, Nyesom Ezenwo Wike has told newly sworn-in chairmen of the 23 Local Government Areas of the State not to approach any financial bank to borrow money without first clearing with the state government.

The governor gave the warning shortly after the elected chairmen of the 23 Local Government Areas of the State took their oath of office at the Banquet Hall of Government House, Port Harcourt on Thursday.

According to Governor Wike, the caution has become necessary in order to stem unguarded desire of some council chairman to access money without any development plan.

“Before you borrow money, the State must know what you want to use it for, and how you will pay it back. So, that others who are coming will not suffer because of your indebtedness.”

Governor Wike also charged the council chairmen to pay proper attention to issues of security in order to stem likely security breaches in their various councils.

The governor particularly urged them to establish a robust working relationship both with the Divisional Police Officers (DPOs) and the Traditional Rulers that will engender having regular security meetings for proper briefings.

“Stay in your council areas. Don’t stay in hotels and in Port Harcourt. If you’re not at home, how do you know about the security situation in your local government. Security is key.

The governor urged the council chairmen to ensure they hold security council meeting weekly or better still, once in every two weeks for proper briefing.

Speaking further, Governor Wike warned them against embarking on needless travel outside of the state and the country without notifying the state government.

He also encouraged them to work to strengthen the unity of the party in their various councils, consult widely with the leaders over appointments, and on other issues that will give everybody a sense of belonging.

The State governor revealed that the state government prevented the former chairmen whose tenure ended on Wednesday from paying local government workers salary due to security report and complains by some councillors and political appointees that they will not be paid what was due them.

“So I decided to suspend the payment of local government workers and political appointees, so that the newly sworn in chairmen will have to pay them without any crisis whatsoever.”

Governor Wike said he has received intelligence report that some council chairmen have sworn that they will not swear in some elected councillors who they perceived to be opposed to them. He warned that if this happens, appropriate sanction will be taken against the erring council chairmen.