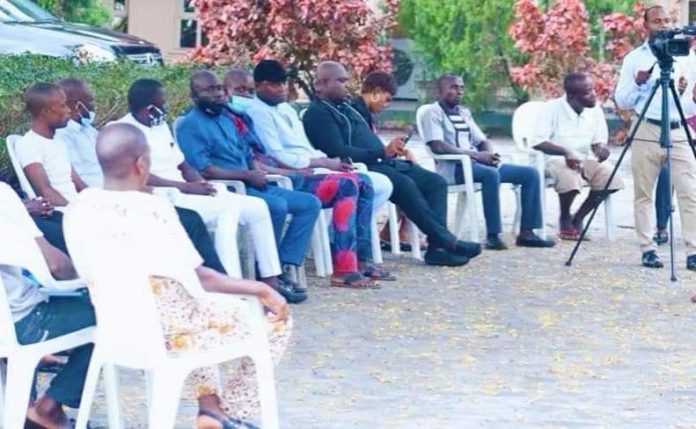 Following extant political happenings in our dear State Abia, the apex youth body unifying the hardworking and ever resilient youths of Ukwa land, has received with dismay, the proceedings and communique arising from a gathering at Isialangwa North LGA, which was purportedly said to be a meeting of Ukwa La Ngwa Elders’ Council.

Ukwa as a geographical entity, clan and political divide in the old Aba division from time immemorial has always been known for her age-old penchant for harmony, peaceful propensity and her very genial political proclivity towards other clans and political blocs in Abia State. It is however, on the above predilection that we wish to disassociate the very revered Ukwa clan from any communique whatsoever, which seeks the enthronement of another Ngwa Governor to replace His Excellency, Okezie Ikpeazu PhD, for yet another eight years, totalling sixteen years for the Ngwa divide.

We wish to bring to the notice of our brothers from the Ngwa divide of the old Aba division that any penchant, orchestration, composition, arrangement and or agitation for the enthronement of an Ngwa Governor for yet another eight years, would definitely result to humiliating imbalance in the distribution of position(s) of power in Ukwa La Ngwa bloc, hence, we are not party to such arrangement.

We also wish to remind our brothers from the Ngwa divide that as at today, the area that is known as Ukwa La Ngwa has the incumbent Governor of the State and a sitting Senator. The two are of Ngwa extraction, none is from the sister divide – Ukwa.

Having said the above, the apex youth body unifying the hardworking youths of Ukwa, met today, Thursday,24th June,2021 and after a critical holistic survey and dispassionate analysis of the happenings, resolved and issued the following communique;

1.That as a people of distinct political bloc,we have confidence in the Governor of Abia State,Dr Okezie Victor Ikpeazu – that we appreciate his sterling leadership qualities, strides in economic and sociopolitical development of the State and do certainly hope,he will impact positively on the welfare of our people, especially,in the areas of road infrastructure, human capital development within the shortest possible time,

3.That as a distinct Political Bloc,we are not,in anyway, unconscious or unmindful of our enormous contributions to the economic well-being of our state,

4.That as a distinct political bloc,we,the people of Ndoki and Asa, strongly believe that Governorship should be retained in old Aba Division that is Ukwa La Ngwa in 2023,

5.That as a distinct political bloc,we firmly and irrevocably advocate that,like what happened in Old Bende where governorship was held for sixteen consecutive years by core Bende and Umuahia group,it is the turn of Ukwa people to mount the governorship of the state come 2023,

6.That as a distinct political bloc that has been contributing more than any other political bloc in Abia State,in terms of economic buoyancy, equity and peaceful co-existence,we vehemently believe that,at the appropriate time when equity, fairness and good conscience would naturally demand we make our interest in 2023 known to other political blocs in the state,the blocs would have every cause to justify our governorship aspiration and support us,

7.That those who think they wear the toga of leadership from Ukwa, just to betray Ukwa interest should better have a rethink and retrace their steps or be ready to be treated as enemies of the Ukwa people and would soon be communicated to in a language they will understand,and

8.That we, hereby, resolve that this meeting attended by major Youth Leaders of various Youth Organizations, Local Government Area Youth Leaders, their Executive Members,Ward Youth Leaders and other statutory delegates,will continuously hold as to constantly review both political and economic developments in Abia State and that, henceforth,the collective interest of Ukwa people as a distinct political bloc,shall be uppermost in every consideration of us in Abia State. 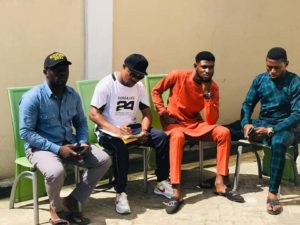 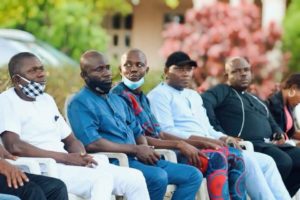 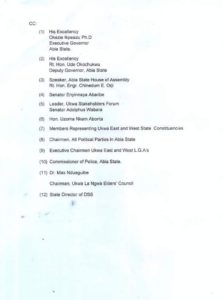 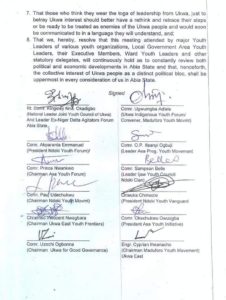 I almost collapse after removal – Sacked Minister of Power, Sale...