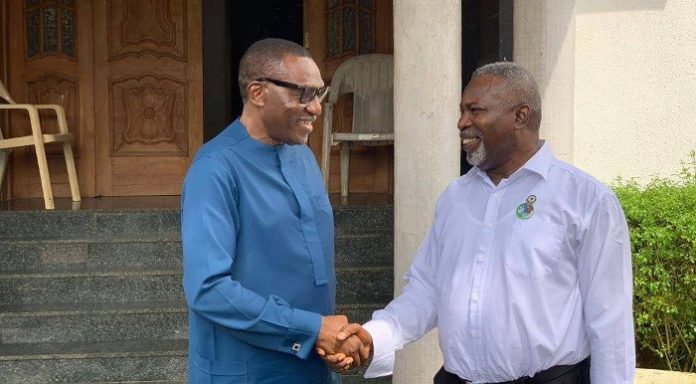 The winner of Saturday’s primary election of the All Progressives Congress (APC), in Anambra State, Andy Uba has begged other aspirants of the party for support, claiming that his victory is for all members of the party.

Uba was on Sunday announced the candidate of the party for the November 6 governorship election in Anambra State.

Uba who spoke to journalists on Monday said he cannot win the November 6 governorship election in Anambra alone if his party men abandon him.

He called on them to join him in the quest to win the election for the party.

Saturday’s election had generated controversy, with about 10 aspirants of the party rejecting its outcome on the premise that they were rigged out while demanding a fresh primary election.

But Uba speaking with journalists in his campaign headquarters said the election was peaceful, while also thanking the leadership of the party, the chairman of the election committee, Governor Dapo Abiodun of Ogun State and members of the party for patiently waiting to vote, despite the obvious waste of time in the process.

He said: “I want to say, please join me. I can’t go on this journey alone. This campaign cannot be achieved by a divided camp. I plead with all today that we come together to achieve our collective victory. It was a free and fair contest and by the grace of God, I emerged victorious.”

“I extend a hand of fellowship and brotherhood to all brave qualified men, who contested this election with me. I ask you to join me to walk this road to victory. I have been in your shoes several times where I was not lucky and I joined the victor to try to achieve victory for our party.

“I implore you to please join me as I recognise that I cannot go on this journey alone. Some may say that it is not easy to be magnanimous in victory, but I declare today that the victory that bears my name is our collective victory.

“I reach out to all, to please join this crusade for eventual victory in November. There is strength in unity; we will walk away from all divisions that have stunted our development and prevented us from our collective dreams.”

Uba said the party members elected him to go on an onerous campaign that will free the state from the ineffectual leadership being provided by the All Progressives Grand Alliance (APGA), and that he was ready to undertake it by accepting his victory at the just concluded governorship primary election of the party.