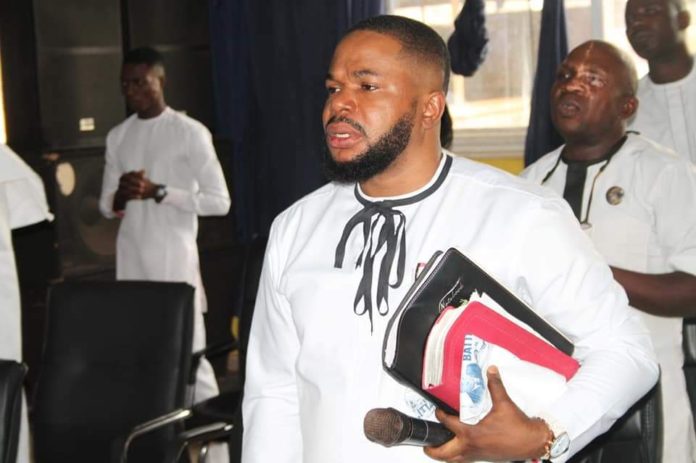 The Prophet. SARS. Me:
How I’m Still Alive by Kel Armstrong.

Many years ago, I worked as a junior pastor under a certain Prophet OC Benjamin of Fulfilers’ House Assembly in Ebonyi State.

At that time I was very much younger and passionate about the things of God. All I wanted was to be called the man after Gods’ heart, like David.

This prophet could tell you everything about yourself; the balance in your bank account; your date of birth; your mother’s maiden name; how old your pregnancy is; the names of all your family members.

He raised the dead, healed the blind, caused the lame to walk, etc.

In fact, there was a woman who delivered a dead lamb in the glaring eyes of everyone, in one of our crusades, after 2 years of being pregnant, as claimed.

This man was a major prophet, I hear he still is, in Ebonyi State.

At that time, we use to move around in a convoy of exotic cars, dresses in costly wears, and walks like the next authorities to the throne of God and we had girls of all shapes and sizes throwing themselves at us.

It was on a Tuesday that year, we had a crusade at Agbani Road in Enugu in a Hotel ( I have forgotten what it’s called.)

We lodged in that same hotel and rented their hall for the crusade.

Before this day, I had informed my friends, Ken, Ita, and Zeal, of the crusade. They were students at UNN and they had always wanted to come and witness the ministration of their friend, me, who was now a pastor.

That first night, while my friends were seated amongst over a thousand people that had attended the program, I led the opening prayers and ‘watered’ the ground for the coming of the prophetic commander.

After I ushered in the prophet, I left to my hotel room. While in my room resting, I dozed off.

I was still sleeping when I heard a bang on the door and I jumped up and quickly opened the door. I thought one of the senior pastors had come to scold me for relaxing in my hotel room while our crusade was going on downstairs. I was wrong.

Immediately I opened the door, I saw several AK 47 guns pointed at me by rough-looking hefty men. I nearly lost my breath.

Without asking me anything they descended on me with blows, boot-kicks, slaps, and my shirt was torn apart and used to tightly tie my hands to my back.

Then they dragged me downstairs.

We got downstairs and I saw an angry crowd everywhere. I saw my 3 friends mercilessly beating and tied to a Hilux van. That was when I realized that these men that tortured and dragged me downstairs were SARS officers.

They asked me if I knew who these my friends were and I stared at these guys I have known for a very long time, confused, not knowing what was really happening or what they did, or how I was connected to it, I could not deny them.

So, what exactly happened?

While the prophet was ministering to the congregation, as usual, he was healing the sick and it got to the turn of a man who claimed he was born blind. This was going to be the major miracle of the night.

Unknown to this ‘blind’ man, my friends were living in the same neighborhood with him. My friends knew that he was not blind and when they saw him faking blindness they thought that the man was deceiving the prophet, so they stood up and went to let the prophet know that the man was not a blind man.

Unknown to my friends, this man was hired by the prophet to fake blindness.

In the process of trying to blow the cover of this ‘blind’ man, the congregation became confused, and to douse the brewing confusion and rising suspicion, the prophet raised false alarm and allegation that my friends were trying to blackmail and kidnap him.

My friends were quickly caught by the congregation and beating to a pulp before SARS arrived.

When they were been beaten they kept on shouting that I was the one who invited them to the program and that was how I was named the pastor who conspired with hoodlums to kidnap the prophet.

These ‘kidnappers’ did not come with a car, no gun, no machete, no dagger, not even a razor blade. Were they going to kidnap and carry the prophet on their heads?

This incident confirmed my many suspicions.

I had always known that there was a reason why some guys who worked with us and are not even pastors were treated with more attention and paid better by the prophet whereas I pray, preach, and do most of the other things to keep the congregation entertained before the arrival of the prophet.

These guys were the ones who gather information to enable papa to prophesy and are also saddled with the responsibility of hiring miracle actors.

That’s why they were paid better and given preferential treatment.

So, to save himself, the prophet sacrificed me and my friends.

Before the SARS people drove away with us, I heard everyone who once revered me curse me and call me all sort of unprintable names, including my girlfriend then, Nneka.

When we got to the police station, we were extremely tortured and subjected to all sorts of dehumanizing treatment by the officers who were doing the bidding of the prophet that gave them fat envelopes.

We were locked up in different cells. As the leader of the ‘kidnap gang,’ I was locked up in cell 1 with other purportedly hardened criminals.

The cell was very small and there was an open toilet at the center of the small room.

We were over 30 in that cell. Some were with gun wounds and other bleeding injuries.

There was no space to sit down or squat. We were all standing awfully close to each other that our dirty bodies were gumming together.

The heat was excruciating and the smell of the open latrine and wounds was suffocating. There was no space to breathe, no water to drink, no one who would have come to my rescue knew where I was.

There was grave silence in this cell except for the unintelligible talks from those who had lost their sanity due to frustration and suffocation.

Each night the SARS people come to that cell and pick one person and we would never see that person again.

I later learned from other inmates that the police people kill and sell body parts to Doctors and Hospitals.

On my 15th day in that cell, a boy brought me a very cold sprite in nylon as bottles were not allowed in the cell.

When he gave me the sprite I couldn’t wait to drink it. I was very thirsty. But he said something immediately he handed it over to me.

He said, “guy, check that thing fine before you drink am oo.”

I was still thinking about what the guy said when someone in that cell snatched the sprite from me and drank it. That guy died that day.

The next morning my IPO came to our cell and shouted my name, immediately I answered he said

“so you are still alive?”

After three weeks in that cell, they took me to OC SARS office and I was shocked to see the prophet there.

He had brought bags of foreign rice, bottles of expensive wines, and loads of other goodies and undoubtedly, money too.

I was shocked when the SARS commander excused himself from his office for me and the prophet to talk.

I looked at this prophet and asked him what I did wrong and he apologized and told me that the well-being of his ministry is worth more than one life.

First, I wanted to know what being part of his EYES means and I know that exchange of one fat envelope can cost me my life.

I was freed and I was shocked to see my mother and her sister and a family friend, at the gate of the police station.

They told me that they have been there for six days and the police refused them access to me.

This explains why no further attempt on my life was made. People already knew where I was.

It was a receptionist in that hotel where I was arrested that found my phone in my room and picked my mothers’ call after two weeks to tell her what had happened.

When I got back to Abakaliki, because it was a small town, almost everyone had heard of the pastor that attempted to kidnap his papa. No one ever cared to ask me what happened, not even my girlfriend.

After this incident, the secrets I was exposed to in the church business is something unbelievable. Since then, I have gone ahead to work with different powerful pastors and prophets, traveled to several countries with them, and trust me, you will not believe me if I told you their names.

Even though I gathered enough unbelievable proofs before I dumped them, I may never talk about the BIG MEN in the church business for the sake of my safety.

I made this one public today because I’m very sure that I have what it takes to fight back if OC Benjamin comes after me.

When I post videos of myself dancing alone in my house, don’t call me mad. I have survived a lot and it’s only God that knows how I’m still here.

Nigerian Man, Bright Ben, Cries Out After His Church Pastor, Moses Adeeyo Married His Wife, Tina Adeeyo Due To “Instruction From The Holy Spirit”