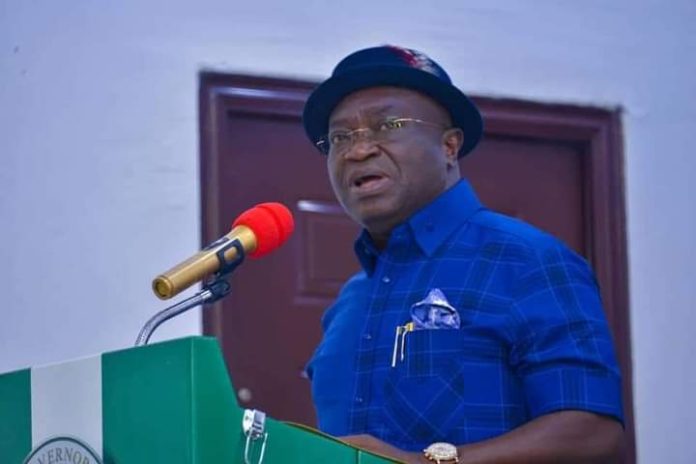 Ikpeazu said Buhari should also hold town hall meetings and talk to Nigerians on the need to live in peace and harmony.

The governor stated this in an interview in Aba, while noting that lots of people are disenchanted with the state of affairs in the country.

He described Nigeria as a country of “smoldering fire where burning charcoals are swept under the carpet and ignored till the inferno” begins to emerge and the country starts fire fighting.

Ikpeazu stated that Nigeria has been suffering from its failure to manage “smoldering fire concealed under the carpet” which has led to inferno.

He urged Nigeria to emulate Rwanda who emerged from a bloody genocide, but has achieved national cohesion as the citizens vowed never to allow their country tread the evil path again.

“If you ask about my foremost recommendation to our national leader, as a response to all the issues, what I will say is that he needs to find energy to visit all the 109 senatorial districts and hold town hall meetings.

“I’m a student of economic growth and advancement and developments in Rwanda. They just made it out of a bloody genocide and yet there is palpable cohesion. The refrain in the mouth of every Rwandan is never again. How did they get to that point? What is it that they did not do? Can Nigerians say never again?

“The President needs to talk to people and have them take notes. Some of the things people will say may be stupid or wise. People are capable of selective hearing, they will hear what they want to hear and ignore what they don’t want to hear.

“Sometimes, they do analysis and perceive it in the negative perspective. This is why I say that the greatest thing Mr. President needs to do is to talk to Nigerians. Our youths here did not commit any crime in saying that there is injustice in the land. People are not properly treated. Appointments are not as fair as they are supposed to be. People seem to be abandoned. Some herdsmen have invaded our forest and raping women.

“People can’t go to their farms and we can’t cope with it. When somebody begins to raise issues about such things, he needs to know the steps that are being taken. People need to understand that there is a red line if they go beyond a certain level, irrespective of where they come from. When that wasn’t forthcoming, people started reacting. Everybody doesn’t have the same equivalent level of mind stability. All these led to this widespread disenchantment.”

He urged the President not to get weary of talking to the citizenry, stressing that Nigeria is a ‘rainbow country’ with different sentiments, traditions, cultures, beliefs and persuasions which must be handled with love and tolerance.

“Talks, conversation, discussions can help. It is only when intelligent discussion or engagement fails, that you get fracas and brigandage takes place. If a conversation ends in a deadlock, you continue the next day. Choose your words rightly and show commitment. We must be governed the way we want to be governed. You don’t govern us the way you want. Anyone who denies that the federal character law is not an important one in Nigeria is joking. There are more than 30 languages in Adamawa alone. We are a rainbow country, our sentiments, traditions, cultures beliefs and persuasions are different. We need to be sensitive. Telling people that they can’t do anything is unfair.

“In the concept of educational disadvantages, some states have cut off points of 100; some have 200 and 2 for others. All of us kept quiet because some states are seemingly disadvantaged and need to be accommodated. Nobody has come to say that the cut off point must be level. This spirit of accommodation is embedded in our constitution through the federal character principle; politicizing the federal character principle won’t work and can only create a milieu that promotes enslavement and tendencies of holding down some people,” he said.

Be warned, CAMA could lead to catastrophic religious war – Pastor...

Over 30 detainees were killed in my presence, billionaire kidnapper tells...