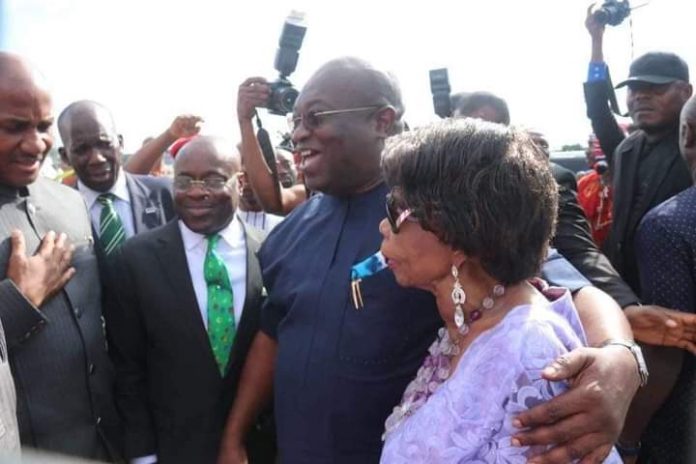 The Governor of Abia State, Okezie Ikpeazu, PhD has expressed profound sadness at the death of yet another iconic Abia woman and a former First Lady of Nigeria, Her Excellency, Noble Lady Victoria Aguiyi Ironsi at the age of 97 years.

Late Noble Lady Aguiyi Ironsi was married to Nigeria’s First Military Head of State and Nigeria’s first indigenous Army General, Late General Johnson Thomas Umunnakwe Aguiyi Ironsi, a great son of Abia State who took up the leadership of the country at an extremely challenging time and paid the supreme price in a bid to foster the unity of this country.

“The now late Noble Lady Aguiyi Ironsi, bore with great equanimity and strenght, the death of her dear husband at the height of his career, after just six months in office as Head of State and Supreme Commander of the Armed Forces of Nigeria in July 1966 and has since then remained strong and committed to the ideals of an egalitarian society”. Ikpeazu noted.

“Here in Abia”, Ikpeazu continued, “Noble Lady Aguiyi Ironsi became a personification of the finest ideals of public service and a permanent resource person to successive First Ladies in our state. Till death, she carried herself with great dignity and charisma”.

Governor Ikpeazu observed with pride that Noble Lady Aguiyi Ironsi was undeterred by the tragic death of her husband and managed to groom her children to become great and responsible members of society who also imbibed the finest ideals of public service, especially her first son, a successful career diplomat, His Excellency, Ambassador Tom Aguiyi Ironsi, Nigeria’s former Ambassador to Togo and a former Honorable Minister of State, Defence.

The Governor is grateful to God for keeping Noble Lady Aguiyi Ironsi to live up to 97 years at a time when life expectancy in Nigeria is on the decline.
Governor Ikpeazu adds further that the death of this woman has robbed our state of one of her greatest political and historical icons, noting that her place in contemporary history is assured.

The Governor also noted that the death of Noble Lady Aguiyi Ironsi, 24 hours after the death of Lady Adanma Okpara bears some philosophical significance.

Governor Ikpeazu, on behalf of his family, the Government and People of Abia State prays the Almighty God to grant her soul eternal rest and console the entire Aguiyi Ironsi family.