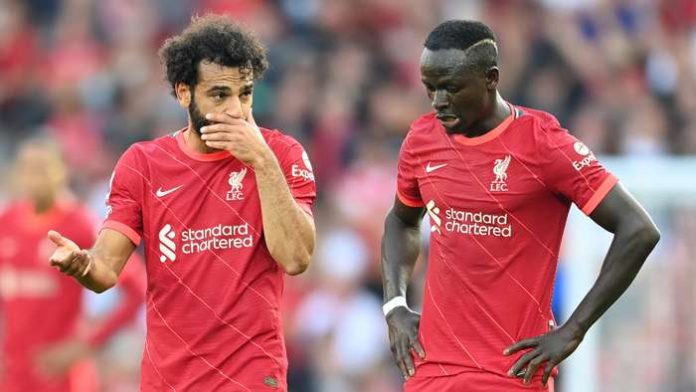 Mohamed Salah levelled from the penalty spot after Reece James had been sent off right on half-time, but the Reds were forced to settle for a 1-1 draw.

In the end, Liverpool will see this as two points dropped.

They had Chelsea where they wanted them. Rattled and angry, the Londoners had been reduced to 10 men with the sending off of Reece James, and seen Mo Salah wipe out their lead from the subsequent penalty.

They went in at half time seething, knowing they would need to withstand a second-half onslaught if they wanted to emerge unscathed from this heavyweight contest.

That they were able to do so reflects well on the character and defensive resilience of Thomas Tuchel’s side, for whom Antonio Rudiger, Thiago Silva and Cesar Azpilicueta put in mammoth shifts.

The European champions produced a masterclass in how to defend when a man down, and the cheers from the away which greeted the final blast of referee Anthony Taylor’s whistle said it all. This was a big point.

Liverpool, though, will take frustration to bed with them this evening. They huffed and they puffed having forced themselves level, but ran out of steam as the second half wore on.

They had their moments and they dominated, of course, but this was no hard luck story. Jurgen Klopp’s side just didn’t do enough.

They had been shocked by Kai Havertz’s 22nd-minute opener, the first goal either of these sides had conceded in the league this season. It was a fine header, looped perfectly over Alisson Becker from Reece James’ corner, and just for a moment this famous old stadium fell silent.

It was bouncing in first-half stoppage time, mind, as an almighty goalmouth scramble resulted in James using his arm to keep out Sadio Mane’s effort.

Taylor, the referee, missed the incident but was advised by the VAR to have a look at his pitchside monitor and reassess. He did. Red card, penalty. Salah made it 1-1, moving to 99 Premier League goals in the process.