Home FEATURED Anambra guber: I brought you to Limelight,Andy Uba fires back at... 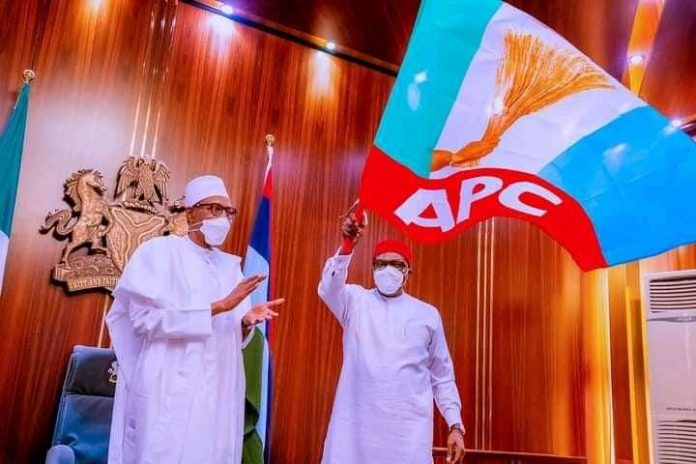 Governorship candidate of the All Progressives Congress (APC) for the November 6 election in Anambra State, Senator Andy Uba, has fired back at Prof. Chukwuma Soludo, describing him as ungrateful person.Soludo, the governorship candidate of the All Progressives Grand Alliance (APGA), had hit Uba, saying that the ex-lawmaker wasted his 16 years as a senator and also a presidential aide.

The former Central Bank of Nigeria (CBN) governor, Soludo, was replying Uba who had described him as a learner in politics. Uba added that Soludo and other governorship candidates were not a threat to his ambition as he would sweep votes with ease.

But replying the former CBN boss, Uba reminded Soludo that he brought him to limelight by positively influencing his appointment as the head of the country’s apex bank.

Coordinator of Uba’s media office, Arinze Igboeli, in a statement, also dismissed Soludo’s claims as a good leader who has all it takes to reposition the state for good. He reminded Soludo that leadership and oratory were not the same.

“We wonder how charisma and oratory alone would assuage the hard times imposed on Ndi Anambra by APGA’s failed governance. Such characteristics are not enough to guarantee the welfare of the people.

“We are not surprised that Professor Chukwuma Soludo, APGA’s pseudo candidate has started running amok because we simply told him that Uba has more experience than he will ever have.

“We read with amusement the attempts to accuse Uba of everything Soludo represents and the allegation that Uba was a failure in his sixteen years of service.

“Ndi Anambra know the truth and we will not shy away from it.

“It is public knowledge that even Professor Soludo’s rise to stardom with his appointment as CBN Governor has Uba’s fingerprints around such an appointment but that is a story for another day.

“However, if Soludo can call a man who facilitated his appointment as CBN Governor a “failure” then Soludo must be the product of such failure and therefore branded a failure.

“Even at that, let us ask Soludo what he achieved as CBN helmsman given the fact that at the end of his tenure as CBN Governor, his successor Mallam Sanusi Lamido Sanusi discovered massive fraud acts which were perpetuated in the banks Soludo was allegedly supervising as CBN governor.

“Compare and contrast with Uba’s eight years as a Senator representing Anambra South, Soludo should be reminded that even the recent landmark addition of Anambra to the league of oil producing states again has imprints of Senator Uba’s wealth of experience as he sponsored a bill to amend the Niger Delta Development Commission Act to include Anambra State in the 7th Senate.

“It is such foresightedness exhibited by Uba that has led to that landmark addition of Anambra.

“Again, let us point out to Soludo that neither Charisma nor Oratory will assuage the hard times imposed on Ndi Anambra by APGA’s eight years of misgovernance. Ndi Anambra will not live on jawbreaking words nor travel our bad roads or overcome our security challenges via charisma, they are not enough, rather what we need presently is a leadership that has no time to play to the gallery, that is the stuff Senator Andy Uba is made up of.

So for Soludo to bank on these characteristics as yardsticks for governance only suggests that he lacks empathy and connection with the masses, grassroots”, the stated