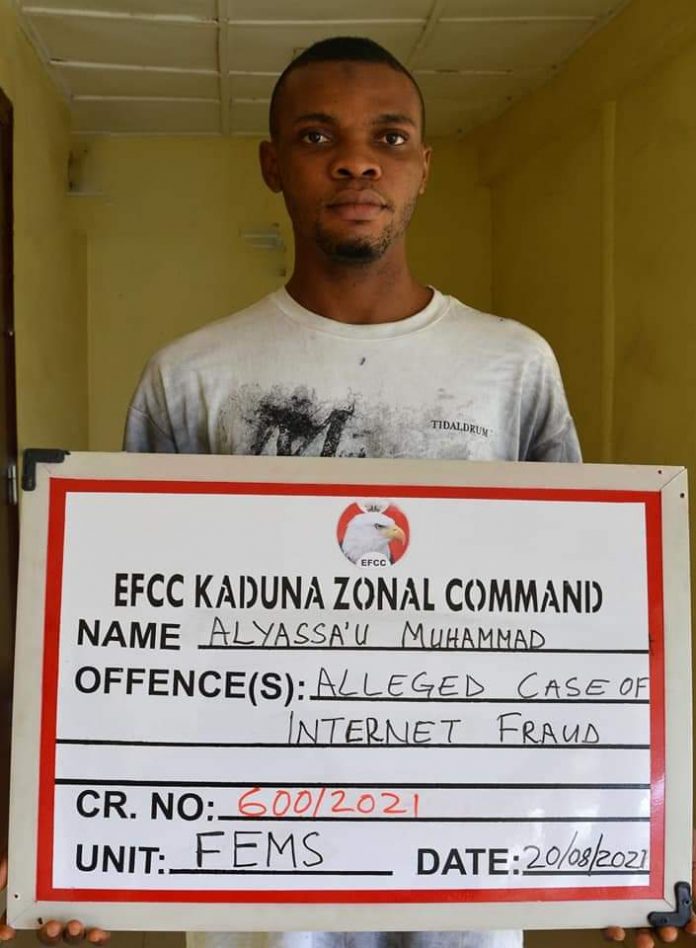 Alayssau was arrested following intelligence on his alleged fraudulent activities on the internet. He allegedly posed as a female Malaysian to induce one Nor Rahem to send money in tranches of foreign currencies into his nominated account 154110205463 in Maybank with account name Hafizan Hamid, on the pretext that they were in a romantic relationship

Investigation reveals that the defendant had three different active Malaysian WhatsApp numbers in his phones which were also linked to a telegram group dominated by Malaysians. It was in the group that he scouts for would-be victims.

Count one of the charge reads, “That you, Alyassau Muhammad, (M) between May and August, 2021 in Kaduna, within the jurisdiction of this Honourable Court, with intent to defraud, obtained the total sum of RM 16, 300.00 (Sixteen Thousand Three Hundred Malaysian Rinngit) only from one Nor Rahem Mohd Jani when you falsely presented yourself as one Lady Aisha ( a Muslim White Lady) and claimed to be in love with him, which pretence you knew to be false and thereby committed an offence contrary to Section 1 (1) (a) of the Advance Fee Fraud and Other Fraud Related Offences Act, 2006 and punishable under Section 1 (3) of the same Act”.

He pleaded ‘not guilty’ to the charges. In view of his plea, the prosecution counsel, M.E Eimonye urged the Court to fix a date for the commencement of trial. But the defence counsel, Abdulhakeem Audu moved an application for the bail of his client.

Justice Balogun granted bail to the defendant in the sum of N2 million and two sureties in like sum. One of the sureties must be a civil servant in Kaduna State with a valid means of identification, while the other must have a landed property in Kaduna

The case was adjourned till September 29, 2021 for hearing.

PDP to Rivers People: Thank You, Our Party remains Grateful