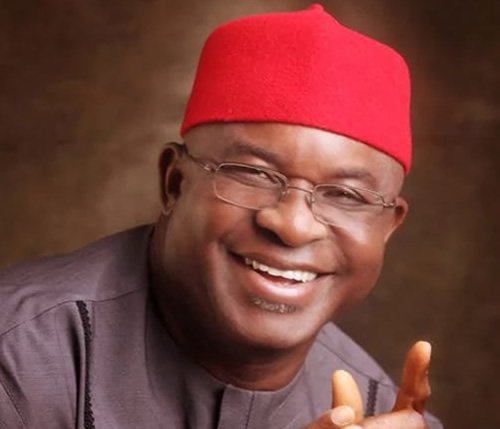 The Reconciliation Committee set up by the Peoples Democratic Party (PDP) headed by David Mark is urging caution in the party’s plan to get rid of its chairman, Prince Uche Secondus, before the expiration of his tenure.

The David Mark committee warns the party against sacking the National Working Committee (NWC) of the party, headed by the suspended Secondus to avoid running into legal obstacles.

But more trouble emerged on Friday for the embattled chairman after a Rivers State High Court declared his suspension by Ward 5 executive committee of the party in Ikuru, in Andoni Local Government Area of the state as valid and subsisting.

The court also granted a perpetual injunction restraining him from parading himself as the national chairman of the PDP.

Secondus is now awaiting the ruling of the Court of Appeal on his appeal against the restraining order slammed against him by two separate High Courts in Rivers and Cross River states.

It was gathered that the David Mark Committee, in its report to the party, asked the PDP not to allow new executives to take over the affairs of the party before the exit date of Secondus team on December 9.

The panel, headed by a former President of the Senate, Chief David Mark, said the Secondus’ NWC should be allowed to serve its term till December 9, 2021 when its tenure will end.

It said Governor Nyesom Wike is yet to agree to withdraw all cases in court.

The panel claimed that although Secondus agreed to withdraw all cases, it was on the condition that he would do so if Wike did the same.

The Mark panel however said the party can go ahead with the conduct of its National Convention.

It urged the PDP Governors Forum to be united, and recommended a five point way forward for the party.

The recommendations were considered by the PDP governors on Wednesday night in Abuja.

The suggestions were said to have guided the PDP National Executive Committee (NEC) on Thursday in appointing Governor Ahmadu Fintiri of Adamawa State as chairman of the National Convention Committee (NCC) and Governor Seyi Makinde of Oyo State as secretary.

Also, Governor Ifeanyi Ugwuanyi was appointed the chairman of the Zoning Committee of the party.

It was learnt that the recommendations of the eight-man reconciliation committee of the party provided the bearing for the PDP governors.

“That the party appoints a Convention Committee that should take over the responsibilities of organizing the National Convention as soon as possible.

“That the handing over after the convention could be delayed until December 9, 2021, to enable the current NWC to serve out their term.

“That the Governors Forum should point the way forward. That there is a need for the governors to continue to be united.”

A source close to the panel said: “This committee opted for a middle approach to the resolution of the crisis to stave off more cases in court.

“What the panel has done is to set the warring parties aside and focus on the survival of the party, which is more important to all the stakeholders.

“The recommendations have also created a window for all the parties to exhaust their claims and counter-claims in court. The panel however advised the parties to withdraw all cases in court.”

However, a Rivers State High Court yesterday declared the suspension of Prince Uche Secondus, by Ward 5 executive committee of the party in Ikuru Town, in Andoni Local Government Area of the state as valid and subsisting.

The court also ordered a perpetual injunction restraining Secondus from parading himself as National Chairman of PDP.

The judge said after careful review of the submissions made by the lawyers to the parties in the suit, he arrived at the conclusion that evidence presented by the claimants before the court clearly showed that Secondus was suspended by Ward 5 over anti-party activities on August 8, 2021 and that the Andoni LGA office of the PDP wrote a letter of acceptance of the suspension on August 10.

The claimants, according to him, also provided evidence that the state chapter of PDP confirmed the suspension of Secondus on August 11, with another letter written to the Board of Trustee of the party on August 13.

Gbasam noted the first defendant, who was represented by his lawyer, Godfrey Uwalaka, never challenged his suspension by his ward.

The judge explained that Article 53 of the PDP clearly states that any member suspended cannot participate in the affairs of the party while on suspension.

He declared that by the virtue of Secondus’ suspension as a member of the PDP in his ward, he has lost the right to function as national chairman of the party and any function carried out by him under suspension remained invalid.

He said: “I, hereby, hold that the court has jurisdiction to hear the suit. I hold, therefore, that his suspension and having been acknowledged by the party in the state, is valid. He shall not so act as national chairman. His suspension still subsists.”

The judge struck out the preliminary objection by Secondus’ lawyer challenging the jurisdiction of the court to hear the matter.

He also dismissed the objection that the matter ought not to have been filed through originating summons.

Gbasam further dismissed the application brought by Secondus’ lawyer that the court lacked power to meddle in internal affairs of the party.

He declared that the court had a constitutional obligation to hear matters, particularly, when political parties clearly breached their own constitution.

The judge declared Article 59 (3) of the PDP constitution which deals with discipline of national officers as null and void saying such officers could not be judges in their own case.

He issued a consequential order declaring Article 59 (3) of the PDP constitution void, because it is inconsistent with Section 36 of the 1999 Constitution of the Federal Republic of Nigeria as amended.

Gbasam, before reading the judgment, dismissed an oral application by Secondus’ lawyer to stay further proceedings on the matter pending the determination of his client’s suit in the Court of Appeal.

But lawyer for the claimants, Nwosuegbe Eze, prayed the court to discountenance the oral application since there was no motion before the court for stay of proceeding.

Gbasam said it had been noticed that parties, who could not prove their cases always use the issue of fair hearing to hoodwink the court.

Embattled chairman looks up to A/Court for reprieve

Prince Uche Secondus is currently   awaiting the ruling of the Court of Appeal on appeal against the injunction slammed against him by two separate high courts in Rivers and Cross River states.

On the strength of the court orders, Secondus has been prevented from presiding over official functions of the PDP, including meetings of the National Working Committee (NWC), the National Executive Committee (NEC) and the National Caucus.

The suspended party chairman had, last week, approached the appellate court in Abuja seeking to vacate the restraining orders from the two lower courts.

But the party has moved on without the embattled national chairman with key decisions about the running of the PDP taken without his input.

The Deputy National Chairman (South), Elder Yemi Akinwonmi, has since been presiding over key functions of the party at the NWC, NEC and the National Caucus.

While Secondus is still battling at the appellate court to regain his seat, the party has gone ahead to constitute the National Convention Organising Committee and the Zoning Committee.

The two committees have been charged with the task of ensuring the realisation of the October 30 date for the National Convention and to decide on which geopolitical zone the next chairman will emerge from.

Key stakeholders, including governors, the Board of Trustees (BoT) and elders of the party, appeared to have since left Secondus to his fate as nobody seems to be bothered about him anymore.

Also, the committee set up to mediate between the embattled chairman and the Rivers State governor, Nyesom Wike, appeared to have made little progress in the task of resolving the matter.

It was gathered on Friday that the eight-member committee, chaired by a former Senate President, Chief David Mark, could not persuade those who obtained the two court restraining orders against Secondus to withdraw their matter from court, even though the embattled chairman had indicated his willingness for an out of court settlement.

The body language of key stakeholders during official party functions since the chairman was suspended appeared to suggest that he may be fighting a lone battle.