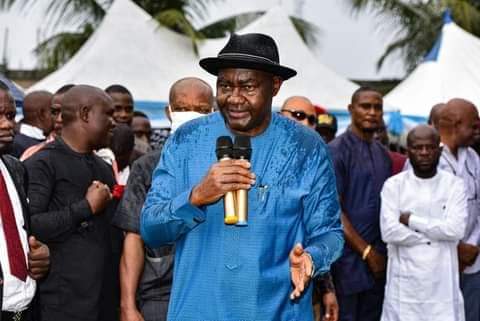 Former lawmaker representing Rivers South-East senatorial district, Senator Magnus Abe, has declared that no one can push him and his supporters across the state out of the All Progressives Congress (APC), because the party is not one-man owned.

This was as he stressed that it would be difficult to do politics in Rivers State APC without his faction.

Abe made the assertion when he addressed APC stakeholders in his hometown, Bera, in Gokana Local Government Area of the state.

He said: “There is nobody in Nigeria, there is nobody in Rivers State, who would say there is no APC in Gokana. Can anybody say that? And you can also see that because of the love that my people have shown to me, because of the love and respect that Ogoni people have shown me, it is now clear to the whole of Nigeria, to the whole of Rivers State, that it would be impossible—I repeat the word ‘impossible’—to do the politics of APC here in Rivers State without you and me.”

“I came here today, to tell you that the national said we should be patient. We have been patient; continue to be patient. Let us wait; when they take their decision, we will know. If they fail to take a decision after everything they have said, they would also explain to you, and we will know. But, nobody should shake.”

Senator Abe stressed that the APC under the leadership of President Muhammadu Buhari belongs to no particular person, noting that no political party survives without crowd.

He stated: “It belongs to all of us. No matter your power [or] money, without the people, you cannot do politics. You are the people.”

“All we need is those that would have the courage to fix what is wrong, so that the party can move on. If that is done, the party will move on, success would be ours.”

“So, remain resolute, don’t shake, don’t [fret]. Anybody that knows where he or she is going would not be afraid when people push you because you know where you are going.”