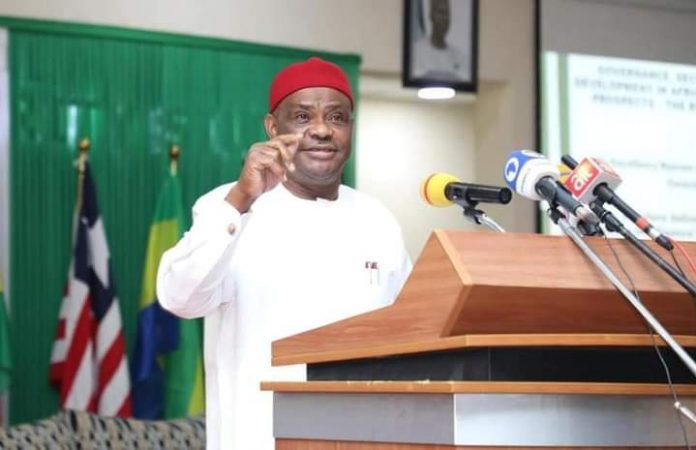 Governor of Rivers State, Gov Nyesom Ezenwo Wike – CON has re-emphasised the need for Nigeria and other African countries to break away from centralised and personalised system of governance in order to achieve enduring development in the continent.

Such sustainable development, he said, will foster economic inclusiveness, offer ethically sound and socially equitable services to every citizenry.

Governor Wike made the assertion while delivering a lecture to the participants of the Executive Intelligence Course Fourteen (EIMC-14), of the National Institute for Security Studies in Abuja on Wednesday.

The Governor spoke on the lecture title: “Governance, Security and Sustainable Development in Africa: Nexus, challenges and prospects – the Rivers State Experience.”

The participants are drawn from 24 agencies in Nigeria as well as from countries in West Africa such as Gambia, Ghana and Liberia.

Governor Wike said if the government system in Nigeria and the rest of Africa is not right, it will be difficult to achieve human security. Such government, he stated, will continue to struggle under costly civil conflicts that threaten the wellbeing of citizens and the very existence of most Africa countries from within.

The governor wondered why a continent with enormous mineral deposits, large arable land and favourable climatic conditions have its 1.3 billion human population living below poverty line.

“From a practical point of view, governance is the ability to exercise authority, political or otherwise, within a defined social jurisdiction to manage public resources to advance public interest and meet public needs.

“African States cannot continue to rely on over centralized and personalized forms of government lacking in true democracy, responsiveness, accountability, the rule of law and judicial independence, equity, social justice, and inclusivity and expect to achieve sustainable development.”

Governor Wike however, noted that the development path in African has largely been more of disappointments because the majority of the continent’s population is unable to enjoy sustainable access to improved and equitable economic, social, cultural and political conditions.

“This being so, governance is about management and performance; the ability to make and implement decisions and policies to advance social progress and because the expected outcome of governance is to improve human conditions, governance is often seen as the foundation of development.

“However, governance by itself does not guarantee human progress. What does is good governance, which among other things, reflects participation, inclusiveness, responsiveness, effectiveness, accountability, equity, rule of law and respect for human rights.”

Speaking about the governance situation in Nigeria, Governor Wike decried the centralization of power and the lack of fiscal decentralization in the country. These, he said, have poorly affected the functioning of the sub-national states and local government areas.

“(These have) resulted in poorly functional sub-national states and local government areas, which are largely detracted by resource-dependency, chronic budget shortfalls and institutional limitations to deliver on their responsibilities for economic growth and provision of infrastructure, education, healthcare, employment generation and food security and improve the wellbeing of the citizens.”

Governor Wike pointed out that when he assumed office in 2015, Rivers State was on the verge of bankruptcy, because the government was owing workers’ salaries and contractors for upwards of eight months.

According to him, there was also the lack of effective governance because the State House of Assembly and the courts have been shut for nearly two years.

What that potent, he said, was a disregards for the consequences on the rule of law, peace and security including the growth of the State’s economy.

Governor Wike pointed out that his administration pursued a well-defined, people-centred and comprehensive approach that have fostered good governance in Rivers State.

Six years into governance, Governor Wike said, his administration has delivered and built a new Rivers State and addressed the thematic issues of good governance, security and sustainable development to the best of its capability.

“We were perhaps the first State to ensure the practical independence of the judiciary at the subnational level under the present democratic dispensation.

“We also intervened in providing the necessary conducive environment for both arms (of government) to operate in dignity with modern and comfortable courts to improve access to justice in the State. We also attended to the wellbeing of judicial officers by providing them with official vehicles and life-long accommodation as a matter of legal right.

“Arguably, no government in history has invested as much as our government to rebuild, strengthen and reposition the institutions of governance without which the rule of law, access to justice, protection of human rights and effective governance and delivery of sustainable development cannot be achieved.”

The governor maintained that the Rivers’ economy was stimulated to grow having pragmatically implemented various reforms of economic policies, which have created and opened up the state to trade and investments.

According to him, the debt burdens were reduced, a transparent and payer-friendly tax system introduced, and strengthened legal right to property, that included the prompt issuance of certificates of occupancy.

“We also ensured the massive provision of socio-economic infrastructures, including roads and markets to stimulate combination, trade and exchange of goods and services in the State.

“As a result of our efforts, our economy continues to enjoy stronger growth, attracting new investments while the small and medium-sized businesses are on the upsurge creating employment for our people, reducing poverty and generating revenue for the government with which government is funding physical and human capital development to advance sustainable development.”

Governor Wike stated that as a government, his administration has worked to strengthen the transformational power of education that is made available to Rivers youths.

Accordingly, he said, the youths have continued to access knowledge, build skills and values that they need to be imaginative, creative, and be productively competitive and be self-reliant.

Governor Wike said good governance anchored on the rule of law has placed the State ahead of other States in all sectors including making Rivers safer for all residents.

He insisted that for Africa to overcome her security challenges in order to achieve sustainable development, it is imperative for her to embrace good governance in all its ramification.

We Shall Impact Every Local Government With Projects – Wike