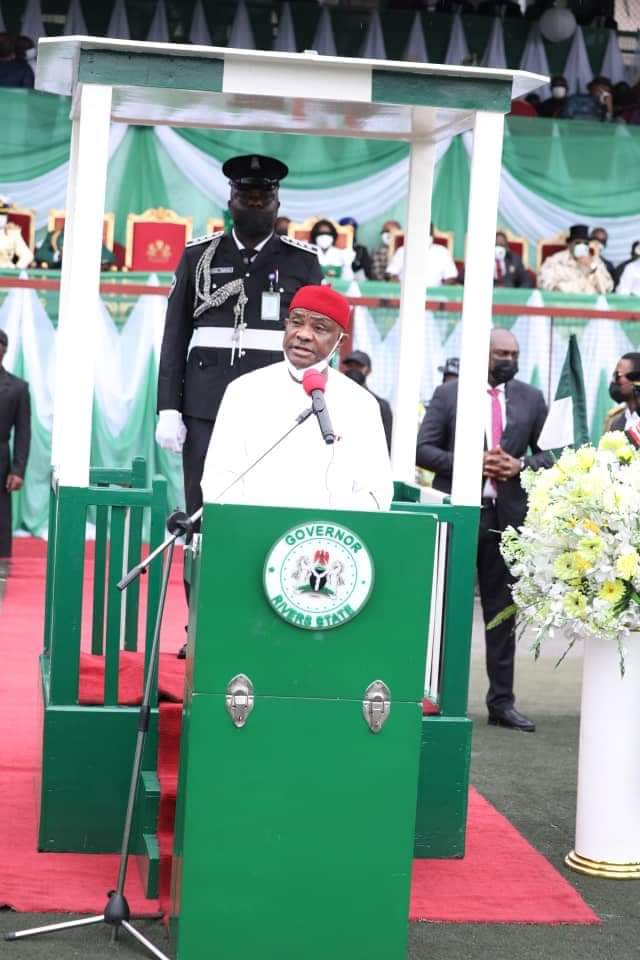 .Governor of Rivers State, Nyesom Ezenwo Wike says that Nigeria, as a nation, has performed abysmally for 61 years and it’s time to quickly muster measures to rescue it from the wrong direction it is headed.

The governor gave the charge at the March Pass and Parade event in commemoration of the 61st Independence of Nigeria that held at Sharks Football Stadium, Port Harcourt on Friday.

Governor Wike recalled that the path to Nigeria’s independence was charted by patriotic, knowledgeable and compassionate leaders whose vision was to build a united, peaceful and prosperous black nation.

He said if subsequent leaders had continued on that path, the nation would have actualised the dream of making Nigeria lead Africa to stand shoulder to shoulder with the rest of the civilized world within the shortest possible period.

“At independence, we were at par and even better in resource endowments and potential for development with our contemporaries like Malaysia, Singapore and several other countries.

“At independence and even now we are a nation blessed with very hardworking and resourceful people. Our youths are some of the smartest people in the world, doing great exploits, flying our flag and making us proud across the world in music, dance, acting, culture, arts, sports, academics and our unique expressions and community ways of live.

“But at 61, it does not seem to me that there is anything worthy of our celebrating except, perhaps, the fact that we have remained independent and managed to struggle with our existence for all these years.”

According to Governor Wike, the worse happened to Nigeria with the military incursion and the country snapped and set itself on reverse course because of the unpatriotic pressure and frustrations that were exerted.

Governor Wike said democracy was dismantled as a result, and the federal system distorted with politically inspired balkanization that defined the country into inequitable and unviable and dependent states and local government areas.

The governor pointed out that the military also succeeded in creating so many fault lines and ocean of injustices, which have continued to blunt, hunt and debunk the basis of the nation’s existence as one indivisible country with one destiny.

“However, the restoration of democracy in 1999, after a protracted and bloody struggle and sacrifice, again, raised so much hope about the future of Nigeria and the aspirations of our people for a better deal from the government.

“With democracy, Nigerians expected the timeless values of the rule of law, judicial independence, inclusiveness, social justice, transparency and accountability to be the basis of governance and transformation.”

Governor Wike opined that, today, after 61 years of independence and 22 years of unbroken democracy, it only seems there is not much to be excited about Nigeria except the notional sense of independence and unity that had endured this long in the face of sustained fratricidal assaults to its existence.

More specifically, Governor Wike noted that in the last six years, from the year 2015, it is evident that most of the countries that started with Nigeria 61 years ago are far more advanced and developed with superlative standards of living for their people than Nigeria can boost of.

Governor Wike remarked that the nation’s democracy is weakened with constant violation of the constitution, and other institutions.
According to him, the National Assembly has abandoned its check and balance roles over the executive, while the judiciary has lost its courage, integrity, commitment to justice.

“In the last six years, our economy has been in tatters and gasping without any realistic hopes for meaningful recovery in the nearest future

“They therefore, told lies when they say that our economy is growing and doing well when no one is feeling the benefits of an improving economy, if any.

“Unable to mobilized sufficient domestic revenues, Nigeria is now one of the most indebted countries in the world, yet the Federal Government’s appetite for more loans remains high even as we are approaching the twilight of its tenure.

“The effect of this is to mortgage the progress and wellbeing of future generation of Nigerians with billions of debts burden in hard currencies.”

The governor asserted that what is required is requisite courage and commitment from leaders and every Nigerians to search and secure solutions to the challenges confronting the country.

The governor suggested a national dialogue that will lead to the emergence of new peaceful, united and prosperous Nigeria based on justice and equity.

“Above all, we must defend the basic structures of democracy and good governance by rising up to protect our right to free, fair and credible elections by demanding for the immediate incorporation of electronic voting and simultaneous transmission of results into our electoral system, which the nation’s electoral management body has repeatedly said, it has both the capacity, commitment and infrastructure to effect, if only the National Assembly would allow.”

Speaking further, Governor pointed out that the National Assembly stands condemned before God and the people of Nigeria should they fail to yield to the overwhelming demand by Nigerians for electronic transmission of election results.

According to him, it is not a matter of politics of sentiments, but a matter of the survival of the country, which is superior to all other considerations.

Recounting the success of his administration in Rivers State, Governor Wike asserted that because of the belief in one Nigeria, the state will never cease to demand the remaking of the country to reflect true and fiscal federalism, devolution of more powers and resources to States and local governments.

Also, he said, there should be a total reformation of the repressive police system to allow for effective Governor’s oversight, control and funding at the State level.

“We have spent the last six years in laying the most concrete foundations for rapid economic growth and put the entire State on the path to a prosperous future.

“Our economy has grown far beyond the national average and is expected to accelerate even further in the coming years with the measures we have put in place, including fiscal discipline, improved revenue generation and massive provision of infrastructure as long as the nation maintains appreciable level of macro-economic stability.”