Home PUO NEWS Customs Intercepts 15 Sacks of Pangolin Scales Worth Over 1.7 Billion in... 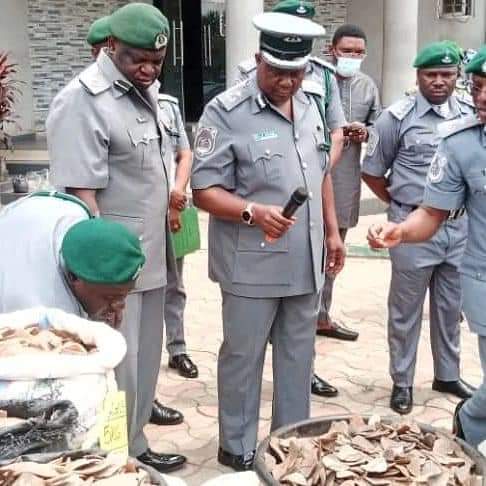 The Nigeria Customs Service has again made Seizures of Fifteen Sacks of Pangolin Scales in Lagos.

Recall that the Service announced a Wildlife Seizure of Elephants Tusk and Pangolin Scales worth over Twenty Two Billion Naira, two Months ago in Lagos.

“You will recall that Nigeria Customs Service acting on credible intelligence provided by our international partners announced wildlife Seizure worth over N22 billion with arrested suspects currently facing prosecution.

In the course of further investigation to arrest other members of the gang, we received another credible intelligence from the same international partner, the wildlife justice commission, and swiftly deployed our intelligence operatives with the Strike Force as a SWOT team. This led to the interception of One (1) Mercedes Benz Bus with registration number BGT 256 LG along Kudirat Abiola Way Oregun, Ikeja, Lagos.

Upon 100% examination, the bus was found to contain the following:

One Sack of Pangolin Claws by 5kg

Two suspects, Mr Salif Sanwidi and Mr Sunday Ebenyi have been arrested in connection with the Seizure and will soon be charged to court to answer for their crime.

“For the avoidance of doubt, illegal wildlife trade contravenes Section 63 “e” and “g” of CEMA Cap 45 LFN 2004. Nigeria is a signatory to Convention on International Trade in Endangered Species of Wild Fauna and Flora. As a responsible member of the global community, we cannot allow our nation to be used as a conduit pipe for illegal trade on wildlife” The PRO stated.

He further assured members of the public that, the Service is committed to the quarterly meeting with embassies of the USA, UK and Germany and welcome on board other International organizations that are joining the fray.

The PRO also commended the wildlife Justice Commission for their continued strong commitment to the course through the provision of credible and actionable intelligence, including technical aids.

“As a Service, we give assurances of strict confidentiality and swift action(s) that will yield positive results as in this instance case” The P.R.O stated.