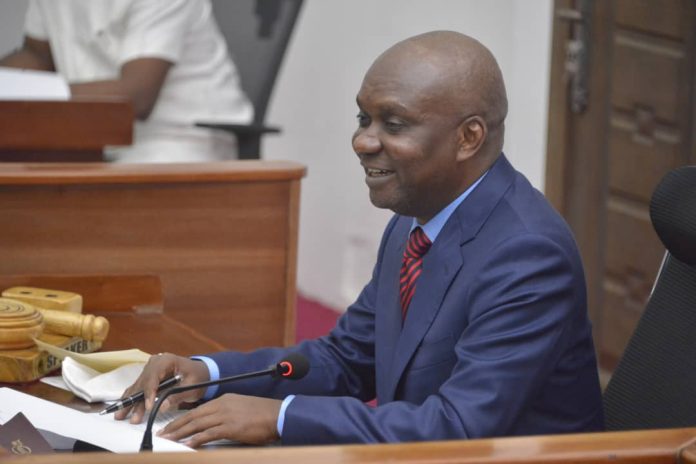 1. Aba North LGA Chairman, others Invited over Reported Assault at the Council

The Abia State House of Assembly commenced plenary after the adoption of Votes and Proceedings of Tuesday, 5th October, 2021.

Hon Barr Emeka Okoroafor, the Chairman House Committee on Judiciary and Public Petitions read out a petition filed by Law firm asking the House to look into the leakages in the Abia State Board of Internal Revenue.

The Speaker said the petition was one which must not be swept under the carpet and went ahead to constitute an Ad-Hoc committee to look into the petition and revert back with its report in the next two weeks.

Members of the Ad-Hoc Committee are :

Hon Stanley Nwabisi, Member representing Ikwuano State Constituency brought up a Matter of Urgent Public Importance to the House about the deplorable state of the Abia State axis of the Umuahia-Ikot Ekpene Road.

The Lawmaker said the road is very bad and has remained impassable for a long time. He further said that the economic activities in his constituency have been crippled thereby causing untold hardship to his people.

In an emotion laden voice, the Lawmaker said the bad state of the road has caused deaths, the latest being the unfortunate incident few days ago which claimed the life of Miss Queen Chidinma Ogbonna, a Final Year student of the Department of Fishery at the Michael Okpara University of Agriculture Umudike (MOUAU) which led to mass protests by students of the institution.

Hon Stanley Nwabisi went ahead to make the following prayers:

a. That the House condoles with the family of Late Queen Chidinma Ogbonna

b. That the House do mandate relevant government agencies to adhere to the directives of the Governor in commencing palliative works on the road

c. That the House mandate the House committee on works to oversight the palliative works on the road

d. That the House request federal Lawmakers from the area to do the relevant consultations and collaborations and help ensure that the contractor that was awarded the reconstruction of the road commences work as soon as possible.

The Speaker also asked the Clerk of the House to invite the State’s Commissioner for Works to appear before them tomorrow so he can intimate the House what the Ministry of Works has done over the directive of the Governor to commence palliative works on the failed parts of the roads.

The Majority Leader after reading from the Order Book of the House moved a motion that the House suspend Order 9 Rule 59 (4) so that they could accommodate another Matter of Urgent Public Importance.

Hon Aaron Uzodike, Member representing Aba North State Constituency brought up a matter of Urgent Public Importance to the House about the unruly behaviour of the Executive Chairman of Aba North Local Government Area alleging that he had a physical altercation with the Head of Works of the council.

Hon Uzodike went further to say that the people are not happy about the behaviour of the Council boss which has led the National Union of Local Government Employees (NULGE) to lock the gate of the LGA Headquarters.

Hon Aaron Uzodike made the following Prayers to the House:

a. That the House invite the following officials:

i. The Chairman of Aba North Local Government Area

iv. Treasurer of the LGA

b. That the House appeal to the leadership and members of National Union of Local Government Employees ( NULGE ) to unlock the gate of the council.

After contributions from Rt Hon Chikwendu Enyinnaya Kalu who told the House that it was enshrined in the Constitution that the House has the powers to invite an elected Executive Chairman of a Council when there is sufficient reason to do so as in this case, the Speaker asked the Clerk of the House to, as a matter of urgency, send invitation letters to the following officials:

b. Deputy Chairman of the LGA

c. Head of Service of the LGA

d. Treasurer of the LGA

e. Head of Works of the LGA

f. Head of the Legislative Council

All those invited are to be in the Abia State House of Assembly tomorrow by 10am.

Finally, the House reached a resolution mandating the leadership of NULGE to, as a matter of urgency, reopen the gate of Aba North Local Government Area Headquarters to allow business in the council go on unhindered.

In his Personal Explanation, Hon Okey Igwe observed that several people in both the chamber and public gallery of the House were not observing the COVID-19 protocols especially as it concerned the wearing of face masks saying that the pandemic was still active and could effect even those who have been vaccinated if caution is thrown to the wind.

He prayed the Speaker to mandate everyone in both the chamber and in the public gallery of the House put on their nose masks.

Responding, the Speaker said Hon Okey Igwe made a very valid point, he therefore asked the Clerk of the House to provide a nose masks for the Members present while members of the public without nose masks were requested to go get one.

In a motion moved by the Majority Leader and seconded by the Minority Leader, H.A.B. 43 and H.A.B. 45 were deferred to be considered on another Legislative Day.

In a motion moved by the Majority Leader and seconded by the Minority Leader, the House dissolved into a quasi plenary session for the purpose of continuing with the screening of commissioner
nominees.

The Sergeant-At-Arms ushered in the first nominee for the day, Rt Hon Christopher Enweremadu from Isialangwa North and a former Speaker of the Abia State House of Assembly.

The Speaker announced that as a former Member of the House, and also as a former Speaker, the nominee would enjoy the full legislative rights and privileges given to such personalities by the legislature in such circumstances. He therefore asked the nominee to take a bow and exit the chamber.

The Sergeant-At-Arms ushered in the next three nominees:

The Speaker asked the nominees to take a bow and exit the chamber having served previously as Honourable Members of the Abia State House of Assembly.

The Sergeant-At-Arms ushered in the next nominee, Chief Mrs Uwaoma Olewengwa.

The nominee identified Hon Abraham Oba as the representative of her constituency.

After questions from the Members which she gave satisfactory answers to, the Speaker told the House that the nominee would definitely do well in any ministry that will be assigned to her after confirmation because of her wealth of experience over the years.

The Speaker thereafter asked the nominee to take a bow and exit the chamber.

Barr Sam Nwogu, the next nominee, was ushered into the chamber. He identified Hon Godwin Adiele as the representative of his constituency.

After questions from Members which mostly bordered on his achievements as the former Boss of the Abia State Oil Producing Areas Development Commission (ASOPADEC).

After the nominee’s answers to the questions, the Speaker asked the nominee to return back to the House tomorrow by 10am with necessary documents of projects started and completed by the commission under his leadership.

The Sergeant-At-Arms ushered in the next nominee, Deaconess Rose Urenta Nna.

The nominee identified Hon Solomon Akpulonu as her representative.

After questions from the House Members to which she gave answers, the Speaker asked the nominee to take a bow and exit the chamber.

The Sergeant-At-Arms then ushered in Sir Israel Chijioke Mark who identified Rt Hon Bishop Kennedy Njoku as his representative.

After questions from the House Members to which he gave answers, the Speaker asked the nominee to take a bow and exit the chamber.

Next, the Sergeant-At-Arms ushered in Mr Okezie Clement Erondu who identified Hon Obinna Ichita as his representative.

After questions from the Lawmakers to which the nominee gave answers, the Speaker asked the nominee to take a bow and exit the chamber.

“Due to your immense contributions to sports, especially football, in the country, and having brought both honours and joy to the nation, we will not ask you any questions in recognition of your great service to the nation. Kindly take a bow and exit the chamber”, the Speaker said to the nominee. He was thereafter ushered out by the Sergeant-At-Arms.

The Sergeant-At-Arms ushered in Barr Anthony E. Nwamuo who identified Hon Paul Taribo as his representative.

The commissioner nominee who had also served as the Commissioner for Environment in the State was asked to return tomorrow with the relevant documents during his time in office as a commissioner.

Mr Godwin Uchendu Ndom was next ushered in by the Sergeant-At-Arms who identified Hon Emmanuel Ndubuisi as his representative.

After questions from the commissioner nominee and satisfied with his response, the Deputy Speaker who at that point stood in temporarily for the Speaker asked the nominee to take a bow and exit the chamber.

Reporting what transpired at the Committee of the Whole, the Deputy Speaker said the House successfully screened 8 commissioner nominees while four nominees were given Legislative privileges of exiting without being subjected to questions.

Hon Paul Taribo, the Deputy Majority Leader of the House, moved that plenary be adjourned to another Legislative Day.

Wife Of Late Lulu-Briggs, Seinye Heads To Supreme Court As...