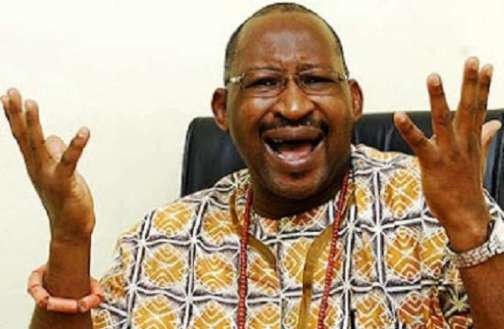 Supporters of former Ogun State Governor, Ibikunle Amosun have said a former House of Representatives member from Edo State, Patrick Obahiagbon, is not qualified to head the All Progressives Congress (APC) appeal panel to review the recent state congresses in the state.

At the Abiodun congress, it was observed that Obahiagbon went on stage, speaking in support of the governor’s faction.

He described the Amosun group’s factional congress as a show of shame and infamy, saying supporters of the former governor did not learn from history.

In a viral video, the former lawmaker stated at the congress that, “APC as a political party is making and has made a very bold, audacious, scintillating and coruscating statement. That, as a party, we are forever ready to deepen the process of internal democracy in all the nooks and crannies and in all the party structures of our party.

“Don’t be deceived, I’ve read it in the media that some political homosapiens in Ogun State have gathered themselves in another political locust and prepared themselves in what I will call a political ‘Macoza dance’ and a political ‘Alawada show’. History is indeed repeating itself in Ogun State. As students of history, our memory system ‘recalls back’ the show of shame, the show of infamy, when this kind of history repeated itself some years ago. I thought people should have learnt. The only thing man learns is that man does not learn from history.

“I want to congratulate specifically, the governor of Ogun State Prince Dapo Abiodun, who in spite of these distractions, in spite of these muddy waters, in spite of these eschewable political cataracts thrown at his developmental agenda, has decided to remain as cool as cucumber, as solid as the Rock of Gibraltar. He has displayed exemplary leadership.”

It was not clear why Obahiagbon was at the venue of the APC congress when the exercise was being held same day across the nation.

In a dramatic twist, less than two weeks after the congress, the APC chieftain appeared in Ogun again as the Chairman of the congress appeal committee, promising to be fair and transparent in his duty.

On Thursday, Obahiagbon explained that the panel had concluded its two-day sitting with no petition received from any aggrieved party members in the State.

Reacting, the APC chairman of the Amosun faction, Derin Adebiyi, explained to newsmen that the group would have been seen as ‘unserious’ if it had appeared before a committee led by Obahiagbon.

“How do you expect us to appear before such a committee? It means we are not serious like them,” he said.

Adebiyi queried the rationale behind the appointment of Obahiagbon as the head of the appeal panel, saying, “How could somebody, such a shameless person, who was part and parcel of their congress, who spoke extensively against us, against what we stand for, praising our opponent, yet just a week after you came out to say you are the Chairman of the Appeal Committee, what do you expect from such a person?”

He maintained that, “In fact, it is only God that exposed him and his collaborators because how on earth will such a person even accept that job?

“Of course we believe that our own Congress is the authentic one, so anybody who has an appeal can go and appeal. We don’t have any appeal.”

Meanwhile, Obahiagbon has explained that his presence at the Abiodun’s congress could not vitiate his assignment as the congress appeal committee chairman.

Offa Bank Robbery: I have No Link With Criminals, Saraki Replies...