Home PUO NEWS How Abia Speaker Shone Like a Million Stars Amid the Glitz and... 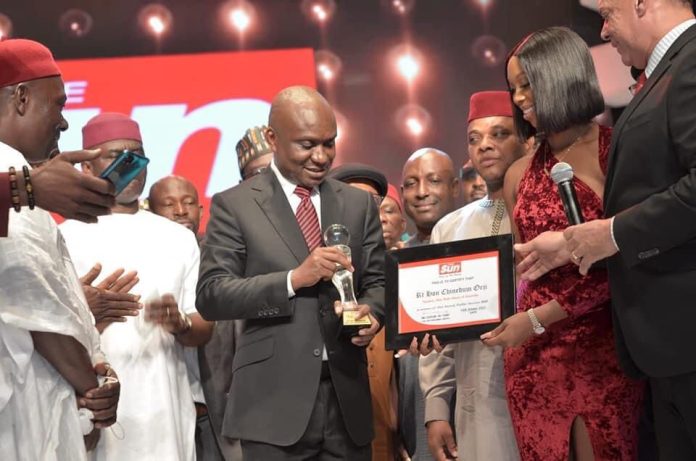 When the Managing Director of The Sun Publishing Ltd, publishers of The Daily Sun, Saturday Sun, Sunday Sun, Sporting Sun, www.sunnewsonline.com and www.sportingsun.com, Mr Onuoha Ukeh and his team visited the Speaker of Abia State House of Assembly, Rt Hon Chinedum Enyinnaya Orji in his office at the Assembly Complex in Umuahia on September 30 to notify him of his emergence as winner of The Sun Public Service Award 2020, it was not in any way difficult to determine how a media outfit of global renown like The Sun Publishing Ltd reached their choice of the Speaker as winner of that particular award.

Like Mr Ukeh rightly said to the Speaker, “Ever since your entry into politics, you have shown that through politics lives could be touched”, a fact that Abians of goodwill regularly testify to, Rt Hon Chinedum Enyinnaya Orji has made himself sacrificially available at every turn to be a beacon of hope where there is distraught, a light where there is darkness, a burst of laughter where there is gloom, a soothing balm where there is pain, and a consolation where there is grief.

From his free healthcare outreach, his stadium projects, scholarships to indigent students, provision of potable water to rural communities, rehabilitation of dilapidated infrastructure in schools, provision of electricity transformers to communities, rehabilitation and equipping of health centres, gifting of cash and empowerment items to support artisans and owners of SMEs, to youth empowerment through training in ICT etc, there is hardly any area of life the Speaker has not touched in Abia State (and beyond) especially through his Direct Touch Initiative which ensures that communities and individuals in need are reached out to directly, the Speaker has been a leader who feels the pulse, and is indeed, in touch with the people.

It is therefore not a surprise that according to Ukeh, “The Sun Public Service Award is given to that man or woman who has made exceptional giant strides in public service and thereby giving hope for a greater Nigeria”.

On the Award Night which held on the 16th of October at the Expo Centre of the prestigious Eko Hotels and Suites, Victoria Island, Lagos, the organisers of the event were taken aback at the enormous goodwill and solidarity the Speaker enjoys among Abians and people from all walks of life when they stormed the venue in their hundreds of hundreds in support of a man who has been a loyal friend, a dependable ally, an unwavering associate, and one whom God has used to bring succour to many, including the high and the lowly.

While seated in the hall where the awards took place, many hustled and bustled through the filled capacity centre to have even if just a glimpse of the Speaker. Photographers shoved at each other as they struggled for vantage positions to capture every moment the Speaker made a turn.

With the dignitaries, it was an almost an unending venture of exchange of pleasantries with the Speaker, a man some of them were meeting in person for the first time after hearing for so long about his enigmatic leadership qualities and iconic philanthropic gestures to the people.

The hall became half empty when the Speaker was called to the podium to receive his award as many trooped out with him in solidarity. Since the podium, though so large, yet could not accommodate the number of people who trooped out with him, many ended up standing at the foot of the podium covering the entire floor area. One could feel the Expo Centre, as impersonal as it is, grinning with envy at such a huge and exceptional support and solidarity for just one man.

No doubt, the Speaker’s award by such a global and reputable brand is another silver in the lining of Abia’s sky and has further cemented the State’s place among those with quality leadership. No wonder the Speaker in his acceptance speech extolled the leadership qualities of the Governor, Dr Okezie Ikpeazu, and his team, and members of the Abia State House of Assembly for the peace in Abia without which there cannot be any growth or development as being experienced in the state today.

The Speaker then dedicated the award to the Governor, members of the Abia State House of Assembly and to his family whom he said have always stood by him at all times and in all circumstances.

Rt Hon Chinedum Enyinnaya Orji is surely a man who succeeds best and quickest by helping others to succeed! The testimonies abound!

Nigeria Won’t Be Made A Dumping Ground For Unqualified Graduates –...