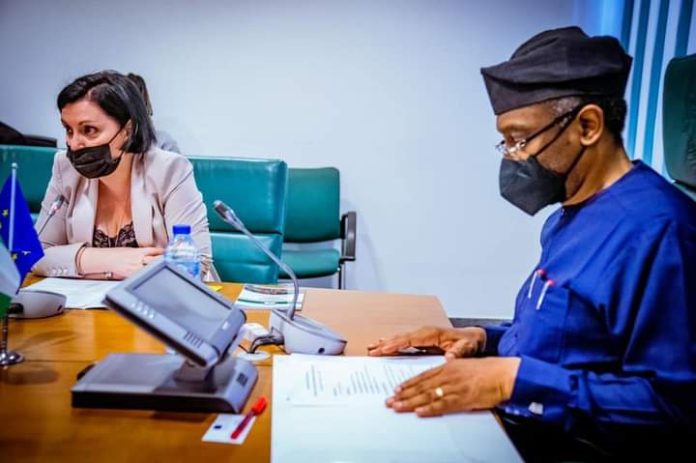 …as European Union in Nigeria lauds House on electoral processes

The Speaker of the House of Representatives, Rep. Femi Gbajabiamila, has assured that the 9th House will bequeath a better Electoral Act that will be acceptable to the majority of Nigerians.

Gbajabiamila said though no country had a perfect electoral system, the National Assembly was making serious efforts to make Nigeria’s electoral law to be in tune with the country’s peculiarities.

Speaking when he hosted a team of the European Union (EU) delegation in Nigeria led by the head of mission, Ambassador Samuela Isopi, on Wednesday in Abuja, the Speaker expressed satisfaction that the Electoral Act (amendment) Bill was passed early enough by the National Assembly and would be transmitted to the president for his assent soon.

“But our goal is to make it perfect. That’s why in the 9th Assembly, we try to see that we make our Electoral Act to be perfect. We took our time to be thorough without sacrificing anything.

Speaking on the issue of gender participation in politics, Gbajabiamila said: “If you follow the 9th House of Representatives, gender inclusion is one of our legislative agenda.

“We also try not to discriminate against the men. In doing that, one of the innovations is to amend the constitution to create an extra senatorial zone exclusively for women.”

Addressing the issue of Sexual and Gender-Based Violence (SGBV), Gbajabiamila said the House did a lot in that regard, noting that “we dedicated a day of sitting to that sometime in the past. We’re still working proactively to make sure that SGBV laws are domesticated in the states.”

Gbajabiamila, who congratulated the new head of EU mission in Nigeria for her appointment, said “I believe with a lot of collaboration, we can do a lot and greater things together.”

Earlier, Ambassador Isopi said the visit was to introduce herself as the new head of mission of EU in Nigeria, reiterate EU’s commitment to continue strengthening its partnership with Nigeria, National Assembly and the House, and to formally announce the coming of a special mission later this month.

She said since 1999, the union had been a major partner and supporter of Nigeria’s democracy, especially in the area of supporting the National Assembly on electoral matters, women and the youth.

“We have closely followed the developments here, and I’ll like to applaud the approach that the National Assembly has taken in the electoral amendment. We’ll continue to support democratic governance and institutions in Nigeria”, added.

She stated that the issue of SGBV remained a priority to the EU and Nigeria, saying they would count on Gbajabiamila’s support to engage the speakers of state Houses of Assembly on the SBGV and the Child Rights Act.

Signed:
Lanre Lasisi, Special Adviser on Media and Publicity to the Speaker, House of Representatives, Federal Republic of Nigeria.