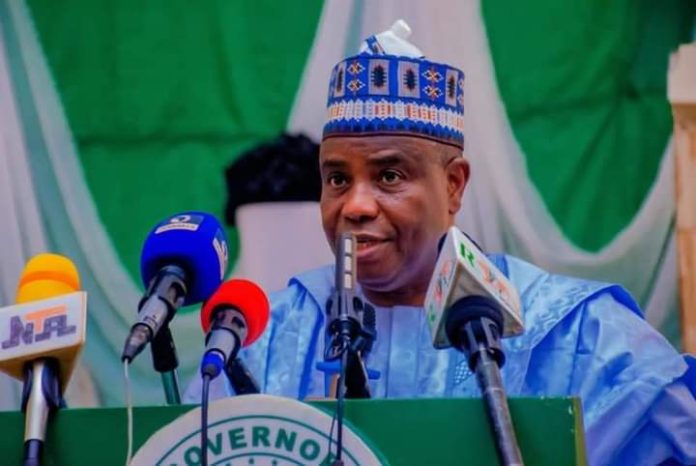 With an annual return of about N328 billion from cattle trade in Lagos state alone, Northern Governors stand to benefit a lot from the adoption of ranching in their respective states.

This should be a move towards the realization of about two centuries old vision of one of the founding fathers of the Sokoto Caliphate, Sultan Muhammad Bello (1817-1837).

Apart from the financial allure, Gov. Aminu Waziri Tambuwal of Sokoto state said ranching would help towards eradication of the menace of banditry and sundry criminalities.

Gov. Aminu Waziri Tambuwal made the call Monday at the 8th Sheikh Usman Danfodio Week which also coincided with the special edition of the commemoration of the 15th anniversary of the incumbent Sultan of Sokoto on the throne held at the International conference Kasarawa. Sokoto state.

The event also featured the unveiling of the new edition of a book: “The Sokoto Caliphate” by written by Prof. Murray Last and re-published by the Premium Times Books.

Later in the day items worth millions of naira were distributed to orphans and the needy through the state Zakkat and Waqf Commission in commemoration of the Sultan’s anniversary by Gov Tambuwal.

Governor Tambuwal’s call to his counterparts was in response to a paper presented by a guest speaker at the occasion, Dr Aliyu Tilde, titled: ‘Bello’s Concept of Urbanization of the Nomad and Its Relevance Today.’

Dr Tilde, who is a serving Commissioner for Education in Bauchi state had suggested that in line with the age long advocacy of Sultan Bello that nomads shouldn’t be allowed to wander in the wilderness, to tend their cattle, but concentrated in urban centers where they can still rear their livestock and live in a congregation that allows them to pursue their otherworldliness.

He, therefore, suggested that government needs to intervene by providing “a breeding program that makes the possession of few number of exotic dairy or meat cattle a sufficient source of income for the owner,” in view of the current realities of banditry, kidnapping and other crimes partly or wholly associated with the Fulani nomads.

He explained that such a program could be sustained through the provision of free land, farming equipment, security, markets and social amenities to the ranchers.

“…Lagos consumes well over 1.8 million heads of cattle on annual basis. We consume over 6000 heads of cattle on a daily basis. When you consider the transactional value alone for Lagos, it’s over N328 billion…,” Tilde cites Channels Television quoting Lagos state Commissioner for Agriculture.

According to Governor Tambuwal, who described Tilde’s paper as relevant on the insecurity situation in northern Nigeria and Nigeria in general,
recommended its presentation to all the northern governors for study and possible implementation.

He said already in Sokoto state, prior to the advent of his administration, 19 grazing reserves and a total of about 100,000 hectares of grazing reserves was established for the purpose of ranching.

Tambuwal.explained that although the program floundered and was about to fail after an agreement was reached with an Argentinian firm on cattle breeding, the incumbent administration continued with the implementation of the programme.

Currently, added the Governor, the state government is collaborating with the Central Bank of Nigeria (CBN) funded US $500 million Nigeria Incentive-Based Risk Sharing System for Agricultural Lending (NIRSAL Plc.) and the Indonesian government in order to enhance the programme.

On the issue of the abolition of Jangali (cattle tax) by fiery and Socialism inclined past governments in some parts of the North raised by Tilde, the governor said when political leaders politicize issues they end up creating problems not only for themselves but also possibly for the future.

Tracing the history of the abolition of
Jangali to the rise of the masses-backed People’s Redemption Party (PRP), which compelled the governments of the National Party of Nigeria (NPN)-controlled Sokoto and others to follow suit, Tambuwal said the stunt became a political tool to turn the masses against the ruling NPN government in their repective states.

But this would, retroactively, work against the political economy of the region which had hitherto generated huge tax income from the jangali that helped it in maintaining security through harvesting information on the movement of the cattle herder, their herds, where they leave, what they do and so on.

He appealed to Northerners and Nigerians to continue to learn from the teachings of Usman Danfodio and his lieutenants, just as he prayed to Allah to guide the Sultan, grant him more health, enrich him and endow him with many years of wisdom as the spiritual leader of Muslims in the country.

In his address, Sultan Sa’ad Abubakar reiterated the importance of history saying that it was paramount if we want to move forward and develop, urging the federal government to ensure the return of history as a subject in the curriculum of schools.

In his paper, Dr Tilde, who professed the urbanization of Fulani nomads, in line with the teachings of Sultan Bello and Islamic traditions, said cattle trade is a flourishing business that need to be made more profitable.

“Today in Northern Nigerian markets, cattle remain the single or the second most expensive commodity that the common man can possess. With a population of 19.83 million heads of cattle, the region has a valuable asset to fall back onto as oil loses its value to cleaner sources of energy,” Tilde submitted