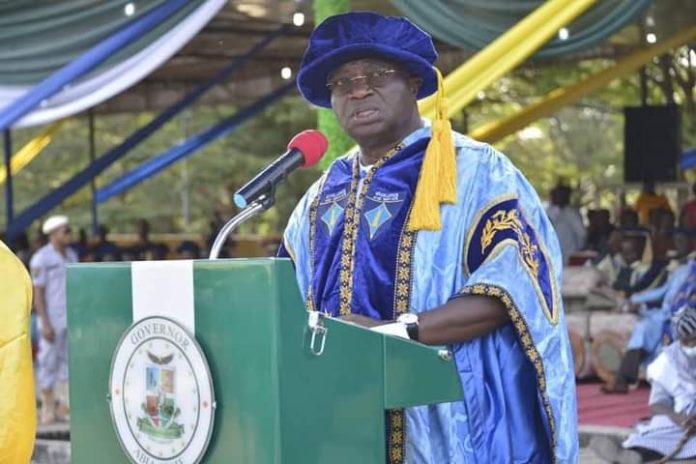 Governor Okezie Ikpeazu has called on the Abia State University to seek for possible ways of adjusting its curriculum to address present day challenges confronting the Society.

Governor Ikpeazu made the call while speaking at the 27th and 28th combined Convocation Ceremonies of the Abia State University held at the institution’s Convocation Pavilion at the main campus, Uturu.

He said there was need to seek current knowledge in areas such as Agriculture to address the current food shortage prevalent in the country today.

To that end, The Governor challenged the institution’s Faculty of Agriculture to embark on more research on ways of grooming local goat as alternative to cow meat.

He commended the lecturers of the institution for their resilience and requested them to continue to hold on even as he assured that he will meet with their leadership before the end of the year to discuss on how best to address the challenges confronting the university.

Governor Ikpeazu pleged the continous support of his administration to the institution and congratulated the graduands on the milestones they have attained.

In their separate addresses, the Chancellor of the University, Tor Tiv and Chairman Benue State Council of Traditional Rulers, Professor James Ortese Ayatse and the Pro-Chancellor Senator Adolphus Wabara thanked Governor and visitor for his tremendous support to the institution.
They called on all stakeholders to support the new Vice Chancellor and management to move the University to a greater heights.

In an address, the Vice Chancellor Professor Onyemachi Maxwell Ogbulu thanked Governor Okezie Ikpeazu for his untiring efforts in keeping the university afloat since inception of his administration and ensuring that the university enjoys uninterrupted academic calendar.

Professor Ogbulu promised to adopt the time tested business model in driving the affairs of the university by creating and expanding value for staff and students and other stakeholders in harnessing resources and installing key processes and procedures befitting a 21st century university and announced automatic employment for the overall best graduating students of 27th and 28th convocation, Ezeigbo Chukwuemeka from the Department of Architecture and Dike Emmanuel from the department of Biochemistry.

In a valedictory speech on behalf of other graduating students, Dike Emmanuel who made a First Class from the Department of Biochemistry thanked the education friendly disposition of Governor Okezie Ikpeazu to Abia students and their lecturers for nuturing them to greatness and pleged to uphold Excellence and Service which the university is known for.

The ceremony which featured the convocation of a total of 5712 graduands including the Wife of the Governor, Dr Mrs Nkechi Ikpeazu who bagged Doctor of Philosophy (PhD) in Management, the Clerk and Permanent Secretary of the Abia State House of Assembly Sir Johnpedro Irokansi among others also featured the conferment of Honorary Doctorate Degrees on deserving members of society including a former INEC Commissioner in charge of the East and widow of the Late former Deputy Governor of Abia State, Dame Gladys Nwafor, Chief Allen Onyema, the Chairman of Air Peace and Dr Nnamdi Ezeigbo, the CEO of SLOT.

Top officials of the State Government and other dignitaries attended the event.