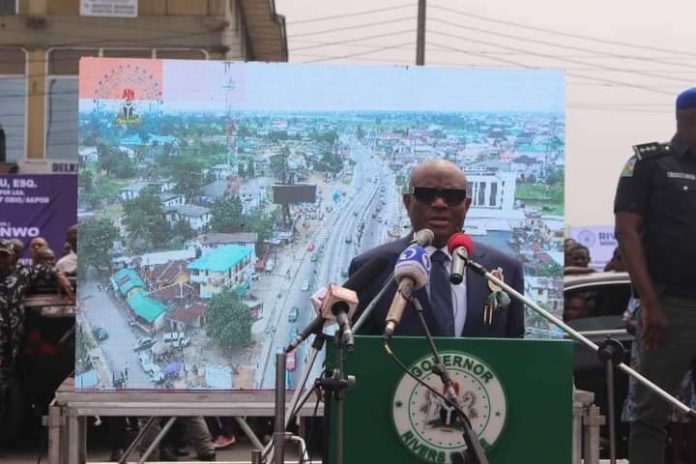 Governor of Rivers State, Nyesom Ezenwo Wike says Nigeria has enormous resources, if well managed, can change, not only the fortunes of the country but the life of every Nigerian.

He has therefore, challenged the Federal Government to show evidence where it has deployed all the money borrowed from external creditors.

Governor Wike made the challenge at the inauguration of the Rumuola Flyover Bridge that was performed by the former Governor of Ondo State, Dr. Olusegun Mimiko on Thursday in Port Harcourt.

The governor stated that his administration is propelled by love and commitment to service, which is why it is working assiduously and deploying the State’s resources judiciously, for the good of Rivers people.

“It is very clear that governance is not by magic. It is all about commitment. It’s all about your love for your people and your country.

“So, all these stories that you borrowed money from here, and there, let us see what the money is being used for. If we borrowed money, we are showing Rivers people what we used that money to do.”

Governor Wike said he is preoccupied with the duties of governance and rendering service to the people who elected him.

According to him, his best reply to the opposition is the evidence of the quality projects that his administration has continued to deliver.

It is clear to them, he said, that the Peoples Democratic Party (PDP) controlled state government has performed creditable well.

Aside the numerous roads completed and ongoing, Governor Wike explained that his administration has within two years period delivered nine flyover bridges, which are handled by Julius Berger Nigeria Plc.

He further continued: “none of these flyovers cost us less than N7 billion. Now, the average of N7biilion into 9 and the other roads done by Julius Berger Nigeria PLC and the quality they give. I’m happy and proud to associate myself with a company that gives the best as far as construction is concerned. I can move about in this state and country proudly.”

Speaking further, Governor Wike warned criminal elements who steal manhole covers on major roads and on the flyovers bridges to desist from their nefarious activities.

He described those criminals and their sponsors as enemies of the state because they are sabotaging the good works that have been achieved to make motoring pleasurable with the State’s resources.

“Let me warn those who steal the cover of the manholes. You know when you take actions, people bring ethnic colouration. Those of you who are stealing the cover of manholes, if you like come from anywhere, if anybody want to sabotage us, we will tell you how saboteurs are treated.

“We cannot do this road construction and you come to sabotage us by stealing to disappoint us, to make people have accident.”

Governor Wike also spoke about the need for his successor to be one who will not only sustained the current pace of development but outperform him.

He pointed out that such person must rise above selfish pedestal and be ready to defend, and protect the interest of the State against all odds.

According to him, those who feel unsettled by Governor Wike’s words and actions cannot take away the fact that he conceives projects, plan projects, delivers projects because he loves projects.

“Some see governance or being in government as an end in itself, you have deployed your limitless energy, by these accomplishments, to demonstrate that governance is a means to an end; the improvement of the lives of our people.”

Dr. Mimiko also spoke about the need to restructure Nigeria because it is an imperative means to a just, more productive and more prosperous nation.

He noted that restructuring is also about policies and actions towards getting Nigerian children off the streets into schools for the right kind of education.

According to him, it is also about improved subnational accountability in tackling youth unemployment and general alienation and many more.

“It is also not about Niger Delta oil and gas alone. After all, with the present state of climate change consciousness and concomitant investment in renewables, fossil fuel may sooner than later become truly fossil and outdated.

“It is about ensuring that all our God-given minerals, e.g., Gold in Zamfara or Osun is optimally exploited for the people, and not unaccountably, by, and for a few elites and their rampaging foreign collaborators.

“It is about a decentralized security architecture that will ensure nimble, versatile, accountable and optimally responsive formations.”

Providing the description of the project, Rivers State Commissioner for Works, Elloka Tasie-Amadi said the Rumuola Flyover Bridge project that was awarded on the 2nd of July 2020 to Julius Berger Nigeria PLC was complete by August 2021.

Tasie-Amadi pointed out that within the period the civil works lasted, there were road closures, traffic diversions, grid locks, deployment of equipment and workers.

He also stated that there were inconveniences caused to commuters, support from many good people particularly the community, and of course payments to the contractors but all of that are over.

“This flyover measures 532m from Ramp to Ramp with the suspended section being 292m long. Service lanes on either side of the bridge are 8.3m wide and 858.4m long. The entire project is adorned with Street lighting and traffic control fixtures.

“The foregoing are all visible including the 24 piers under the bridge. (24 columns if you may).”

Tasie-Amadi said, before the project commenced, there was only a single carriage bridge which became grossly inadequate for the volume of traffic.

To address the situation, he said, a second bridge was built, service lanes completely reconstructed and expanded and all elements required to ease commute and pedestrian activities were incorporated into the project. That also included but not limited to refurbishment of the old bridge and adjoining streets.

“Please permit me to cease this opportunity to urge road users and the relevant agencies to ensure compliance with codes and strict adherence to road and traffic signs erected around the area, most notable amongst these are signs which make it unlawful to stop on the bridge and high speed lanes and which require that all commercial vehicles use only the service lanes. The bridge is essentially off limits to commercial vehicles.”