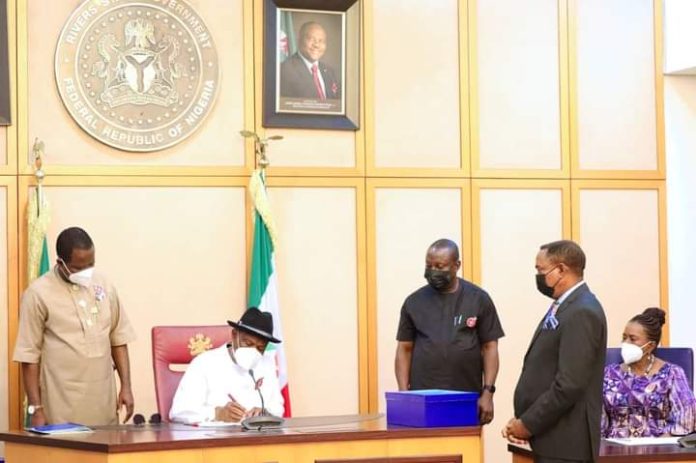 Governor of Rivers State, Nyesom Ezenwo Wike has assured that his administration will mobilise resources towards achieving 80 percent implementation of the 2022 budget.

The governor gave the assurance shortly after signing into law the Rivers State Appropriation Law No. 11, 2021 at the Executive Chamber of Government House, Port Harcourt on Tuesday.

“By the grace of God, we’ll hit the ground running from January 1st. And so, we think that what you have done is to give support to the executive council to render good services to the people of the State.”

Governor Wike hinted that as a political year, 2022 will also be turbulent politically and will require so much attention in that regards.

He noted that the refusal of President Muhammadu Buhari to assent to the Electoral Act amendment bill will have ripple effect on the polity, particularly if the National Assembly decide to override his veto.

“So, next year will be politically turbulent and it will affect performance of every budget. But I pray to God that it shouldn’t be much, so that we will be able to execute the necessary plans and goods we have for our people.”

Despite all these, Governor Wike said his administration will remain focused in providing services to the State and its people.

According to the governor, everything will be put in place to ensure the State have the enabling resources to execute and implement what is provided in the budget.

“I must sincerely thank and assure you that we will do all we can to make sure we achieve not less than 80 percent of the implementation of the budget, believing that God willing we will get the necessary resources.”

Governor Wike thanked the lawmakers for quick passage of the Appropriation Bill and continual support in the provision of sustained good governance in the State.

Speaker, Rivers State House of Assembly, Rt. Hon. Ikuinyi-Owaji Ibani acknowledged the robust collaboration that has existed between the executive and the legislature.

Ibani said most critics of the projects of the Wike administration, particularly the flyovers, lack hindsight about the overall derivable benefits.

According to him, there is a reduced travel time occasioned by the flyovers on Port Harcourt- Aba expressway, which is real value added to quantum of time used in doing business.

The Speaker noted that Governor Wike has brought dynamism to governance in applying practical ideas and solutions to problems besetting the society.

Presenting the Rivers State Appropriation Law No. 11, 2021 to the Governor for his assent, leader of the house, Hon. Martins Amaewhule said lawmakers sat, studied the various estimates before passing same.

According to him, given how the previous budgets have been implemented, they are sure that this current appropriation law will be implemented to consolidate the successes already achieved.