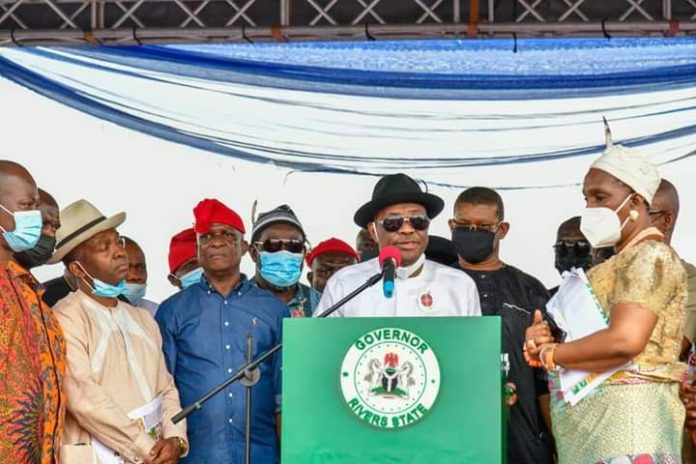 Rivers State Governor, Nyesom Ezenwo Wike has berated the leaders and people of Ogoni ethnic nationality for promoting disunity among themselves while blaming the backwardness of their area on others.

Governor Wike made the accusation at the 30th celebration of Ogoni Day with the theme, “Leaving no one behind”, that held at the Birabi Memorial Grammar School, Bori town, in Khana Local Government Area of Rivers State on Tuesday.

Specifically, Governor Wike queried how many Ogoni leaders can truly defend the interest of Ogoni land, and genuinely pursue issues of environmental degradation and resource control with the same zest demonstrated by their forebears like late Ken Saro-Wiwa, without selling out.

He noted with regret how some Ogoni people have now debased the struggle and have rather used it to collect money from those who do not want the goals of the struggle achieved. According to the governor, such monetary largess they make can best be described as blood money and wondered with what conscience that they gather each year to celebrate a struggle that they have betrayed.

The governor asserted that he had never betrayed Rivers’ interest but defended it with courage including pursuing the OML 11 law suit at the Supreme Court. He observed that the case may not concluded before his tenure will end, but it may secure the most needed ownership right of such resources to the people.

“You people are talking about OML 11. Today, I’m in Supreme Court to challenge the federal government and NNPC. I will not be governor forever, I’m leaving next year, but God in heaven will bear me witness, I have protected, defended the interest of the state and interest of Ogoni land.”

Governor Wike admonished Ogoni leaders and the people to stop being used as agents of discord by the Federal Government and its agencies to pull down their own and betray the Ogoni interest.

He pointed to how Ogonis are contributing to frustrate the political career of one of their bright brains, Senator Magnus Abe, and Ledum Mitee’s long fight to become a Senior advocate of Nigeria (SAN).

The governor also noted that the same lack of unity seen in Ogoniland is prevalent in the entire Niger Delta because governors in the region, lawmakers and other levels of leaders are hardly working together in unison. According to him, the people of Niger Delta are the ones marginalising themselves because each tribe thinks herself as more Niger Deltan than the other

Chairman of the occasion and President, Ijaw National Congress, Professor Benjamin Okaba said the fundamental problem of the country is the refusal of the Nigerian State to restore the derivation principle that was abrogated by Decree NO.34 of May 1966 by Aguiyi Ironsi, the subsequent promulgation of Petroleum Decree 1966, and General Olusegun Obasanjo’s 1978 Land Use Act considered widely as the most obnoxious, draconian and unjust piece of legislation on land and resource ownership.

“Chief Obasanjo who is unarguably widely travelled, if excused from the paranoid of hypocrisy and hatred for the Niger Delta, will admit that in the United States of America which presidential system Nigeria borrowed from, it is the states where oil is found that own them and not the Federal Government of America.

“It’s the reason states like Texas is very rich, from proceeds of oil and gas. Same goes for Canada. In every federation, the undiluted application of the fundamentals of federalism (including fiscal federalism) are the minimum prerequisites for sustainable unity, peace and coexistence. Where else among the nations that practice federalism that permits the federal government to hijack the resources from the various federating units and communities, siphon them to the Centre on the Emperor’s laps, and shares same as booties in the manner we have in Nigeria?”

The former President of the Movement for the Survival of the Ogoni People (MOSOP), Ledum Mitee, in his remark recalled how he and other Ogoni leaders gathered at the same venue 30 years ago to commence the Ogoni struggle that has since been recognised globally.

He appealed to the Nigerian state to extend rail line to Ogoni which has contributed immensely to the development of the country’s economic growth.

Senator Barry Mpigi commended Governor Wike for gracing the occasion and identifying with the Ogoni people and their struggle.