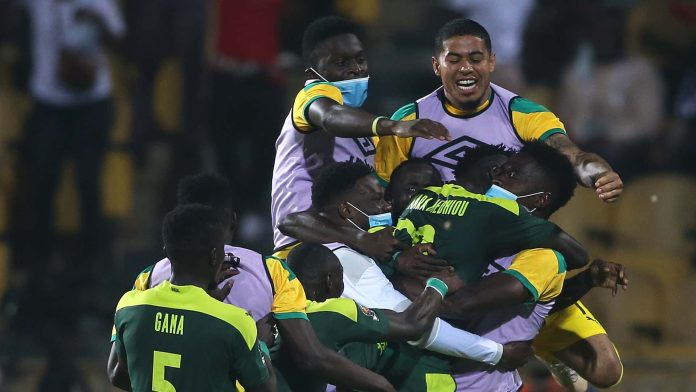 Aliou Cisse’s men saw off the Stallions’ challenge to book a place in Sunday’s showdown at the Limbe Stadium.

Senegal secured their place in the final of the 2021 Africa Cup of Nations after defeating Burkina Faso 3-1 on Wednesday night.

Wednesday’s encounter started as a physical contest with both teams trying to dominate the opening minutes which resulted in back-to-back medical calls.

As early as in the third minute, Cyrille Bayala and Nampalys Mendy were involved in a clash of heads, however, both players got on their feet after treatment to continue play.

In the 17th minute, Burkina Faso had their first attempt on target with captain Bertrand Traore forcing goalkeeper Edouard Mendy to make a save following a cross from Gustavo Sangare.

Mane had his chance shortly after but he could not beat Herve Koffi, however, it was a difficult start to the game for the Liverpool forward who struggled for space in the Stallions’ half as he was closely marked.

The encounter got more physical on the half-hour mark after goalkeeper Koffi rattled into Cheikhou Kouyate while trying to punch an aerial ball.

The stoppage delayed the game for a couple of minutes with both players stretchered off, but Kouyate returned to continue after receiving treatment while the Burkina Faso shot-stopper was replaced immediately by Farid Ouedraogo.

The referee was made to check the VAR for a penalty check but there was no reason for the call.

The first 45 minutes ended as a cagey affair and the long stoppage due to injuries resulted in six minutes of added time.

Senegal called for a penalty after the ball hit Edmond Tapsoba, but it was overturned by the Ethiopian referee after checking the VAR.

It got interesting for Senegal as the introduction of Watford’s Isamila Sarr and Marseille’s Pape Gueye for Famara Diedhiou and Kouyate in the 65th minute boosted their push for an opener.

Aliou Cisse’s men finally broke the deadlock in the 70th minute following a corner-kick and Kalidou Koulibaly attempted an unsuccessful backheel which dropped for his defensive partner Diallo to fire in.

A few minutes later, Senegal had another attempt and a chance to double their lead but Pape Gueye’s header, off Saliou Ciss’ cross, was narrowly off target.

Despite their lead, they kept pushing to cause more havoc and they were rewarded when Idrissa Gueye won the ball in front of Burkina Faso box and passed to Mane, who brilliantly fought his way to the goal before passing to Dieng to score his second goal of the tournament in the 76th minute.

Burkina Faso tried to fight their way back into the game and they halved the deficit following a fine team move that was finished by Ibrahim Toure in the 82nd minute.

It was looking to be a nervy finish in Yaounde until Mane put the game beyond the Stallions’ reach to secure Senegal’s progress with the third goal in the 87th minute.

The triumph means the Teranga Lions will play in their second straight Africa Cup of Nations final on Sunday and they will battle the winner between Egypt and Cameroon.