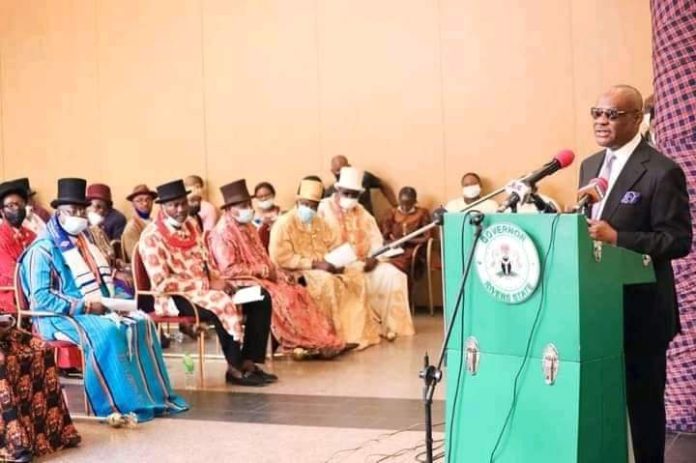 Rivers State Governor, Nyesom Ezenwo Wike has cautioned traditional rulers in the State not to allow illegal oil bunkering and artisanal refinery activities in their domain.

The governor, who reiterated his resolve to sustain the war against illegal oil bunkering and artisanal refining activities has specifically warned the King of Akpor in Obio/Akpor Local Government Area and the King of Omerelu in Ikwerre council not to allow such activities to thrive anymore in their respective domain.

The governor said the State government will not hesitate to depose the King of Akpor kingdom if illegal oil bunkering continues in Rumuokparali and Ogbogoro communities.

He also frown at the king of Omerelu community in Ikwerre Local Government Area where illegal oil bunkering activities is thriving.

According to the Governor Wike, aside the soot problem and economic sabotage associated with the criminal activities, the internal roads being reconstructed by his administration in Omerelu are damaged.

“We are doing internal roads in Omerelu. This is a community that has been crying for roads and we have given them not less than 11/12 kilometers of internal roads, and now they’re spoiling it because of the conveying of the products. We can’t continue to accept that. I can’t understand why you just want to collect the chieftaincy title and do nothing.”

Governor Wike told the two kings presented with their staff of office to come to terms with the responsibilities associated with their new status and discharge them effectively.

He said they are to ensure peace prevailed in their domain by attending to all shades of conflict so that they do not snowball into crisis.

He also charged them to stop partisan politics but be willing always to work in synergy with the government in order to promote governance at the grassroots.

“This your certificate of recognition comes with a lot of responsibilities. Do what you’re expected. Relate with government to know what is going on.

Speaking further, Governor Wike said the demolition of shanties will continue because hoodlums use such places as hideouts to perpetrate their criminal activities including those found in the Government Residential Areas in Port Harcourt.

“Civil servants will retire and change documents and forge it that they had allocation twenty years ago, for State government property. I am taking them back, all.”