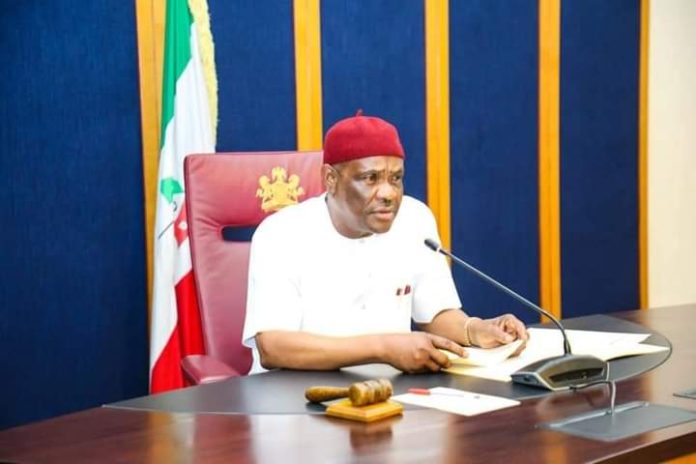 Rivers State Executive Council has received a brief that only N2 billion and not the requested N2.5billion, was eventually released by the Central Bank of Nigeria (CBN) as its Healthcare Intervention Fund support to the State.

The briefing on CBN was one among the wide range of issues and approvals considered and given by the council at its meeting that was presided over by Gov Nyesom Ezenwo Wike – CON at Government House in Port Harcourt on Thursday evening.

Briefing journalists after the meeting, Commissioner for Finance, Isaac Kamalu said the money from the CBN has already been deployed.

“And that the N2billion has been utilised for the payment of contractors in the respective medical institutions for which approval was sort and granted.

“That is, the Prof. Kersley Harrison Hospital, Dental and Maxillofacial Hospital and Dr. Peter Odili Cancer and Cardiovascular Diseases Diagnostics and Treatment Centre.”

Kamalu explained that with the provision of these medical services by the Rivers State government, the quest for medical tourism embarked upon by Nigerians to foreign countries will be reduced.

“These facilities are being put in place by government, not just to provide medical services for Rivers citizens and residents here but for other Nigerians who would have the benefit of getting these medical services without seeking to go abroad for the same service.”

Speaking further, Kamalu said that Council also approved for the establishment of a first class Radiology and Radiotherapy Unit at the Dr. Peter Odili Cancer and Cardiovascular Diseases Diagnostics and Treatment Centre in Port Harcourt.

This unit, he stated, will be run by professional healthcare management experts who will ensure that maximal and requisite services are provided.

Council, he explained, had observed the long abandonment of those properties without attention, which now serve as hiding place for criminals and miscreants from where they constitute security risk to those who reside within the GRAs.

“Again, leaving those plots overgrown with grasses have defaced the urban renewal programme which the State Government is implementing.

“And so, council had approved that all those undeveloped plots and uncompleted buildings in Old GRA and New GRA be acquired.

“Monetary payment will be paid to the owners as agreed with the government.

The Commissioner for Housing briefed further that Council had also approved that when the plots are acquired, they will be reallocated to indigenes of Rivers State and other residents who are in the state, and who are capable of redeveloping or developing them within a timeline of 12 months.

“And again, Council also approved that those reallocated these plots cannot resell these properties to anybody and if they do, Rivers State Government will revoke such allocation.”

Nwobueze pointed out that Council also confirmed rectification of any previous acquisition made by the State Government.

Also, Nwobueze said, Council approved for the sale of the Rivers State Government owned former Riv-Bank Insurance building and premises that is located on plot 6,7 and 8 Orije Layout on the Port Aba Expressway to members of the public.

According to him, the Wike’s administration has reconstructed and developed the structure into a 7 storey office complex.

“The State Government took this decision having considered that the property will be better maintained by private investors. And that the funds invested by the Rivers State Government in reconstructing this 7 floors building can be recouped from the sale of this property.

“And that the proceeds from the sales of this property can be judiciously put into the execution of the numerous ongoing projects by the Rivers State government.”

On her part, the Commissioner for Commerce and Industry Mrs. Ifeyinwa Nwankpa said Council also approved the sale of Delta Hotel and Eight Catering Rest Houses in the State.

The Catering Guest Houses, she noted, are located in Ahoada, Bori, Degema, Elele, Isiokpo, Nchia, Omoku and Okehi, which have all become dilapidated, non-functional and used as hideouts for hoodlums.

“And so, it will be waste for government to pump in money into bringing them back to use by renovating these facilities.

“So today, Council agreed that we will call on willing private investors who will put them back to use and then renovate them for the use of our people, and it will also create employment for our teeming youths.”

In his briefing, the Commissioner for Information and Communications, Paulinus Nsirim said Council approvals on issues related to healthcare delivery, housing and commerce are in line with government avowed commitment to ensure that greater priority is given to those sectors of the economy.

According to him, more impetus is therefore, given towards the implementation of required services for the benefit of Rivers people and those who reside and do business in the State.

FBI Thanks Dubai Police For Arresting And Extraditing “Hushpuppi, Woodberry”