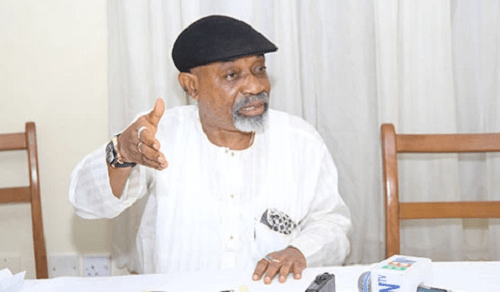 –-Says UTAS is yet to fully pass integrity, security tests

–-I’ll respond when I get official communication from ASUU—Ngige

The Federal Government Monday accused the Academic Staff Union of Universities, ASUU, of being insincere in its claims on the reason for the declaration of one month warning strike.

The Federal Government described the purported strike as an illegal leave which should be called off immediately.

In addition, the government said that the University Transparency Solution, UTAS, which ASUU came up with as the payment mode against the Integrated Personnel and Payroll Information System, IPPIS has not passed the integrity and security tests conducted by the National Information Technology Development Agency, NITDA.

This is as the Ministry of Education has set up a group to look at the renegotiation of the 2009 agreement as it concerns condition of service, salaries and the welfare packages of workers.

The Minister of Labour and Employment, Senator Chris Ngige, who responded to Vanguard enquiries on the position of the Federal Government over the declaration of one month warning strike by ASUU said that he has not received any official communication by the university teachers.

But asked what would be the reaction of the government if officially communicated to, he said, “Proactively, we have been working with the Nigeria Interreligious Council NIREC co-chaired by the Sultan of Sokoto His Eminence Sa’ad Abubakar and Rev. Samson Ayekunle, President of the Christian Association of Nigeria, CAN. They have held two meetings with ASUU. In labour administration and labour parlance, it is allowed, it is called tripartite plus.

“So as the conciliator, the President has directed me with the Minister of Education and Chief of Staff to liaise with NIREC and so we are in communication with the NIREC secretariat and the Sultan himself who was attending to other issues over the week. They have held two meetings with ASUU and which they told them to give them a chance to look into the matter fully and I have equally briefed them on the situation of things where the government group is. So, I don’t know how ASUU has now declared a strike and call it a warning strike, there is nothing like a warning strike.”

Asked why government was always in the habit of reneging agreement entered into with unions as alleged, the Minister said, “Stop using that language. If an agreement is reached, it is binding on the two parties. But if an agreement says party A should do this and party B should do that, if A doesn’t do what it supposes to do and B as government has not done what it is supposed to do, do you blame them?

“I give you an example on UTAS, University Transparency Solution, they are supposed to work with NITDA, NITDA is the office that will give certification for any software to be used in any government agency. And you say you want to deploy it to the university system for payment and NITDA has looked at your solution, looked at the acceptability, looked at the security, whether it can be hacked (vulnerability), looked at its integrity test and out of 500 tests they conducted, they told them that 300 of them didn’t pass.

“How do you then deploy such a solution or such a system, how? How do you do that? Is it the Labour Minister that will decree that it must be used? Is it not NITDA and the Ministry of Communications and Digital Economy you’re working with? So, if they write you and say these are our observed lapses in your own and you reply because they gave me the lapses and I forwarded it to ASUU, ASUU now replied and said that some of the things that they are saying are about the integrity test are not correct.

“The next thing to do is to match the two groups to come with their technical team and we will bring independent observers in with some of us who are not computer gurus, we get experts and put in. the two groups will display what they want to display, those experts will give us expert opinion, is it not what is supposed to happen?. But ASUU now says government has refused UTAS and you people take it hook line and sinker, t is wrong.

“The hardwares will be deposited and housed in National University Commission. So they have been meeting, they have been working on it. But they said no, that they want their own to be put into place immediately and that if there are any lapses, correction will be done. But NITDA says it doesn’t work that way. You can’t accuse the government to have not done its own bit, government said it is going to use it, it is home grown, and we like home grown things. I, in particular, like home grown things in the Ministry of Labour, I like the Order 3 and Order 5 of the Presidential Order to be obeyed and save foreign exchange for the country. . So that one is there, they are now jettisoning it.”

Fielding question on the way out, he said, “The way out is they (ASUU) have to call off this their leave. They gave themselves leave by force, that is what they did, illegal leave.”