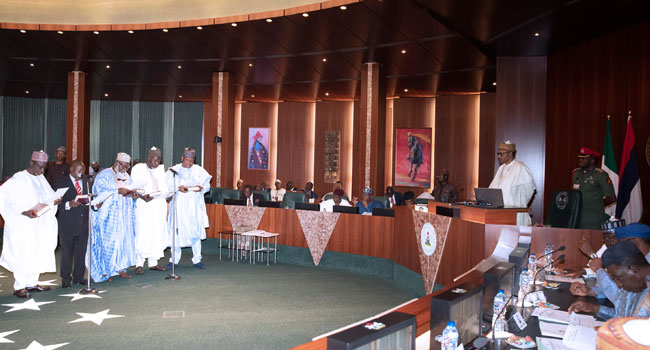 He did so shortly before the commencement of the weekly Federal Executive Council meeting at the Presidential Villa Abuja.

Present at the inauguration of the Commissioners were Vice President Yemi Osinbajo; President of the Senate, Ahmed Lawan; and Speaker, House of Representatives, Femi Gbajabiamila.

Secretary to Government of the Federation, Boss Mustapha; Chief of Staff to the President, Prof. Ibrahim Gambari; and some ministers also attended the inauguration of the INEC Commissioners.

Speaking to State House Correspondents, soon after the swearing-in, INEC Chairman, Professor Mahmood Yakubu said Nigerians should expect the best out of INEC, now that the Commission has the full complement of its Commissioners.

“It’s coming three days to by-elections in four states of the Federation and as we plan for the Ekiti and Osun governorship elections.

“As we continue to prepare for the 2023 general elections, we’ll go on firing on all cylinders now that we have the full complement of commissioners and Nigerians should expect the best out of the Commission.”