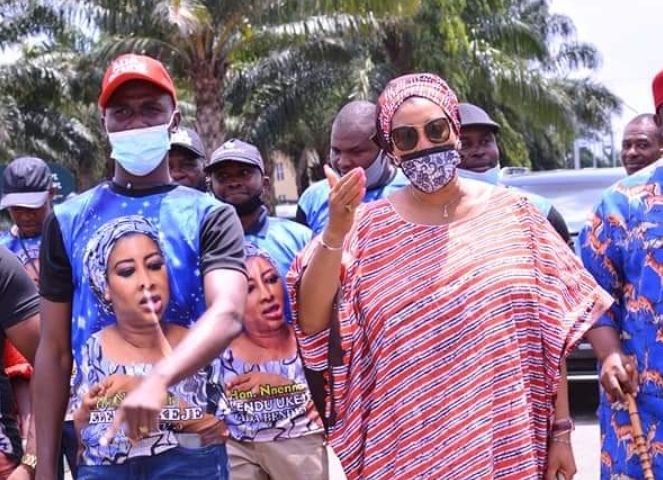 Deputy Chairman of Bende Local Government Area, Hon. Promise Uzoma Okoro has made it clear that he will support Hon. Nnenna Elendu Ukeje if she contest for any position by 2023.

I am an adult, and I think I have come to the age of political decision, as we approach the 2023 general elections, I have decided to rise or perish with Hon. Nnenna Elendu Ukeje (Ada Ukwu Bende), she has my full support in anything she wants to contest as far as 2023 general elections is concerned.

In 2021 when I chaired the planning of the successfully held grand civic reception in her honour, I encountered a lot of opposition physically and spiritually.

You would recall that on that day, it was raining heavily in Aba, Umuahia ,Alayi and Igbere.

We later discovered that some persons hired rain makers to ensure that the programme was disorganised with rain, but they didn’t know we operated from the highest spiritual realm.

I am not the type that comes around when the food is ready or on fire, I come in when the pieces of firewood is being gathered so that food can be made.

The recent attempt to scare her aware by burning down her house is provocative in its entirety and all those who has direct or indirect involvement won’t be spared by the law.

Those who said they are awaiting the conclusion of investigation should stop obstructing the investigation and allow the security agencies to do their work.

Some of these guys who are being sent to make inflammatory comments should understand that they would be abandoned when the heat becomes too much.

Nobody is asking you not to criticize, but stop threatening anybody or being abusive, till date I criticize whoever I wish, but I can never make any threat against anybody.