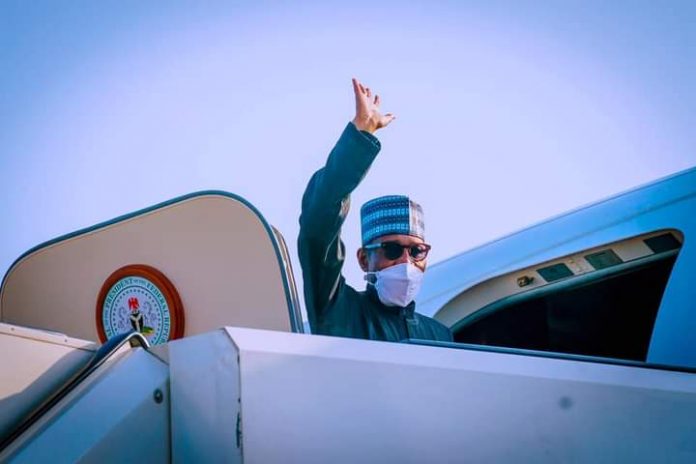 …Says no vacuum in Aso Rock as he jets to London

…Osinbajo in charge, he declares

…CECPC to decide on zoning this week

This is a decisive week for the ruling All Progressives Congress, APC. Ahead of its March 26 National Convention, the party hierarchy is expected to iron out the issue of zoning of offices especially that of the national chairman and 2023 presidential ticket.

Jostling for both positions and the attendant bitter contests have flung the party to the edge of the precipice. Various camps in the party are at daggers-drawn over which of the three zones in the South should get the presidential ticket, and likewise, which of the three northern zones the national chairman should come from.

However, President Muhammadu Buhari has said that the ruling APC has the capacity to resolve its differences regarding the forthcoming national convention.

President Buhari, who left Abuja yesterday, for London, United Kingdom for what The Presidency described as “routine medical checks”, also said that going by constitutional provisions, Vice President Yemi Osinbajo will take charge of governance in his absence.

The APC has been embroiled in internal wranglings over zoning of political positions, which is threatening to tear it apart.

It was reported that President Buhari has endorsed Senator Abdullahi Adamu, a former governor of Nasarawa State as consensus candidate for the party’s chairmanship position but other aspirants for the seat have allegedly kicked against what they described as imposition, which they said runs contrary to the tenets of democracy.

Despite the agitations and crisis in the party, President Buhari said that there is no cause for alarm, as the party has what it takes to handle every issue.

Fielding questions from journalists before he departed for London on what he would tell a section of Nigerians who have expressed doubt over the ability of the APC to conduct a successful national convention, the President said:

“Well, they should wait and see. How did we come as a party to take power from the ruling party, who had been there before us for so many years? So, we have the capacity, everything will be all right.”

On the vacuum to be created as a result of his absence, he said: “Well, I cannot claim to be doing the work alone. The government is fully represented. The Vice President is there. Constitutionally, whenever I’m away, he’s in charge. And the Secretary to the Government and then the Chief of Staff, so, no problem.”

President Buhari, who departed to London for medical checks is expected to stay away for about two weeks.

CECPC to decide on zoning this week

In spite of the controversies trailing zoning of offices, the Caretaker/Extraodinary Convention Planning Committee, CECPC, will address the issue this week

The Governor Abdulrahman Abdulrazaq-led committee on zoning is expected to submit its report to the Governor Mai Mala Buni-led CECPC today.

Party sources said the CECPC will meet to look at the report for further action in what they said was a deft move by the CECPC to take ownership of the zoning process.

At the weekend, it emerged that President Buhari might have sanctioned a zoning arrangement ceding the national chairmanship to the North-Central and specifically adopting a former governor of Nasarawa State, Senator Abdullahi Adamu as his candidate.

APC had last week set up the Abdulrazaq committee, with the Deputy President of the Senate, Ovie Omo-Agege serving as Deputy Chairman and Deputy Governor of Anambra State, Nkem Okeke as Secretary.

The committee is expected to submit its report today.

The committee is essentially to work out a zoning formula, which would be looked into by the CECPC for possible adoption.

The development effectively ran counter to reports credited to Kaduna State Governor, Nasir El-Rufai on the party’s zoning formula as the CECPC has now taken charge of the process.

It also put paid to speculations that President Buhari might have endorsed Senator Abdullahi Adamu as consensus national chairmanship candidate.

Meanwhile, the Al-Makura Campaign Organization, ACO, has faulted reports in a section of the media to the effect that the former governor of Nasarawa State, Senator Tanko Al-Makura, was bent on opposing President Buhari in the choice of a consensus national chairmanship candidate of the APC.

The campaign organization said Al-Makura could not have been opposed to a purported consensus chairmanship choice of the president when neither the president nor the party leadership has made any public statement on the matter.

In a statement issued by its Director-General, Comrade Dominic Alancha, the ACO said: “Senator Al-Makura as a bona fide aspirant for the position of the National Chairman of the APC was in Ondo to consult with Governor Rotimi Akeredolu in continuation of consultations with APC governors, party leaders and stakeholders, which he commenced many months back.

“It is therefore mischievous and unkind for anybody to claim that he was working against President Muhammadu Buhari’s choice of a consensus candidate for the position of the National Chairman of our great party. This is a deliberate, albeit failed attempt, to paint a renowned party man and one of the founding fathers of the APC in bad light.

“This is even more so when neither the President, whom Senator Al-Makura holds in very high esteem, nor the party leadership has made any statement to the effect of any endorsed consensus candidate.”

Also, Senator Sani Musa, (APC, Niger East) has continued his consultation with stakeholders, leaders, members and supporters of the APC on his national chairmanship aspiration.

Musa, who is using the visits to inform them of his plans for the party, promised that if elected as the national chairman said he would completely re-engineer the internal structures and workings of the party.

The chairmanship aspirant, who reiterated his belief in the leadership of President Buhari, said that as a democrat, the President will not subscribe to imposition against the will of majority of party faithful, adding that he would continue with the consultations exercise and prepare himself and others for the national convention with the hope of winning the chairmanship contest.

Musa, who noted that the party needed a total leadership re-orientation for it to actualise its institutional potentials, said, if given the opportunity to lead the party “I will completely re-engineer the internal structures and workings of the party. APC needs total leadership reorientation for it to actualize its institutional potentials.”

“Most importantly we shall govern by the rule of law, abide by the party constitution, guidelines, manifesto and in line with the constitution of the Federal Republic of Nigeria.

“We will run an inclusive leadership that is devoid of the habitual grain of the entrenched political culture of dynastic politics, sectionalism, favouritism, money politics, parasitism on the public pay roll, cronyism and patronage.

“We shall thrive to be self-funding and not rely on individuals that will later want to be dictating the tunes and which will create wranglings and disharmony in the party.

“Under my leadership the party will embrace more technology in our operations which will reduce waste and abuse of our party best practices.”