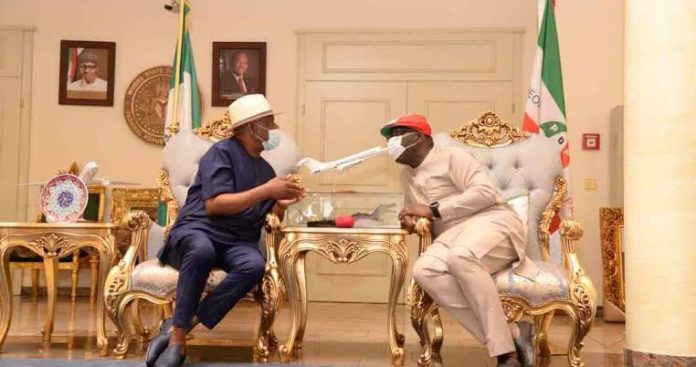 Rivers State Governor, Nyesom Ezenwo Wike has accused his Edo State counterpart, Governor Godwin Obaseki as a politician who is given to serial betrayal of those who help to advance his political aspiration.

Governor Wike made the accusation at the inauguration of the Community Secondary School, Omuanwa in Ikwerre Local Government Area of the State on Monday.

The Rivers State Governor maintained that he owes the former national chairman of the All Progressives Congress (APC), Adams Oshiomhole an apology for opposing him when he insisted that Obaseki is a treacherous and ungrateful man.

Governor Wike said Oshiomhole was right then and has been vindicated given the recent display of ingratitude by Governor Obaseki to the Peoples Democratic Party (PDP) and to those who had helped him to secure his second tenure as Governor of Edo State.

Governor Wike informed that Obaseki is never his match where character matters because he is consistent, sincere and a forthright team player, who has never betrayed any person who had helped him politically.

He explained the problem in Edo State stems from Governor Obaseki asking the National leadership of PDP to dissolve Edo PDP executive when the leaders had been elected before he joined the party and had provided formidable structure for him to win the election.

The Rivers State Governor wondered why Obaseki is unable to bring everybody together and work with them but instead wants to unleash the illegality of APC in PDP, which is being resisted because ordinarily he is a political tenant in PDP.

“I’ve invested in the party, Rivers state have invested in the party. We have voted for PDP since 1999 till now. Ask Governor Obaseki, has he done anything for PDP? Has he voted for PDP? The only election he voted was his own election when we gave him umbrella. So who has more stake in PDP? I have more stake, because I’ve supported PDP always. You’ve never supported PDP, rather it was when your godfather chased you away and you came begging, kneeling down. People came with pressure and we allowed you. Ordinarily, you’re a tenant.”

Governor Wike clarified that he fought the then sitting governor in Rivers State to access and take charge of the party structure in the State.

He said it is unfortunate that Obaseki could describe him as a bully now that he is being called to order. According to him, it is unfathomable that a man who came to him to get PDP’s governorship ticket in 2020 could now turn round to accuse him of being a bully.

“You came to beg a bully for you to have a ticket. A bully was your DG campaign and a bully bullied you into Government House. What a shame. It did not only end there. You came with your wife to thank the bully that after God, the bully made it possible for you to be there.”

Governor Wike said the Edo State governor reference that he jostling to get the PDP presidential ticket smacks jealous and bitterness. He insisted that if he want to run for the office of President, the likes of Obaseki and his cohorts, cannot stop him.

“If I’m contesting for president, with due respect, I’m qualified, very qualified. If not more than qualified. I challenge Obaseki and his cohorts, some of the presidential aspirants who are using him to talk, if I decide to run tomorrow, I challenge anybody, including the so called Obaseki, what you will see, you will say you never knew this is what politics is.”

He further continued: “Tell your presidential aspirants who are sending you, let them pray I don’t come out. If I come out, I will win them.”

Governor Wike said he remains eternally grateful to God for the privilege to preside over the affairs of Rivers State which has immense resources that is being deployed to develop the State.

Inaugurating the project, former Minister of Information, Prof. Jerry Gana described Governor Wike as a courageous leader who is focused, has capacity, wisdom, integrity and dedicated to service.

Gana noted that Governor Wike has used the resources of the State to better the wellbeing of Rivers people and has become a sterling example of the kind of leadership Nigerians should expect from the PDP in 2023.

He expressed the optimism that PDP will take over power in 2023 to restructure the federation, and transform the economy in order to reduce poverty.

Gana urged Governor Wike to run for presidency and said when Rivers people should present him as the candidate that has their support, the entire people of the middle belt of Nigeria will not hesitate to stand with them.

Providing the description of the project, the Special Adviser to the governor on Special Projects, Alabo Dax George Kelly said the school sits on 21 hectares of land with 5 blocks of 6 classrooms each, 350 capacity hostel, 350 capacity dinning hall, Staff quarters, offices, laboratory, library and an internal road of 520 m long and 7.3m wide.

INEC Fixes April 2 to Resume Collation Of Results In Rivers