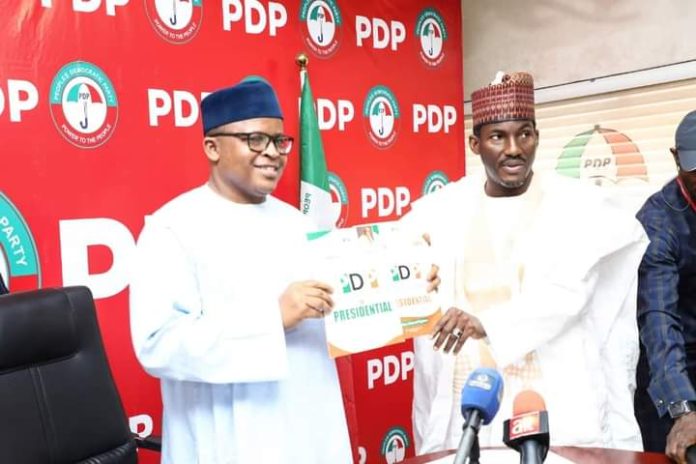 Governor Wike’s form was submitted to the National Organising Secretary of the PDP, Hon. Umar Bature by Senator Sulieman Nazif at the party’s national secretariat in Abuja on Friday.

Speaking on behalf the delegation that submitted the form, Senator George Sekibo assured Nigerians that if Governor Wike is elected president of Nigeria, he will expeditiously tackle the protracted insecurity, economic and infrastructural challenges facing the country.

Senator Sekibo, who represents Rivers East senatorial district in the National Assembly, said since assumption of office in 2015, Governor Wike has been able to transform the infrastructural landscape of Rivers state.

“For us from Rivers state, we are proud to say that Governor Nyesom Wike has served diligently, has served very well. And we are sure he will bring that same service and extend it to this country. Just as he has eliminated issue of security in Rivers state, issue of security in Nigeria will be eliminated. Just as he has brought infrastructural revolution in Rivers, bad roads will be eliminated in Nigeria.”

He further added: “We believe that when Nigerians give him (Wike) that opportunity to serve them as the president, he is going to replicate what he has done in Rivers State and much more in the entire country. We have our confidence in him. This is a testimony from us from Rivers State that he can serve Nigeria, and we believe most of the woes we are crying about every day by the grace of God when Nyesom Wike becomes the president of the country will be drastically reduced and eliminated.”

Senator Sekibo, who described the Rivers state governor as a bridge builder, explained that he is resolute about his presidential ambition and has been travelling to various states of the federation to consult with critical stakeholders.

“Virtually every day he is one state or the other state consulting every person who manners. And we believe that with that level of consultation Nigerians are buying into the project. We also believe that before it will be the date of the primary, virtually every Nigerian will buy into this project. Why did I say so, he is a bridge builder.

Similarly, Senator Lado Danmarke, who was among those who purchased the form for Governor Wike, said they took the decision because the Rivers state governor has competence and capability to restore the lost glory of the country.

On his part, the National Organising Secretary of the PDP, Hon. Umar Bature, gave assurance the party will give all presidential aspirants a level playing field.

“We wish him (Wike) the very best in this contest and we believe the party will benefit from the process of selecting our presidential candidate. And as we said from the beginning that everybody will be given a level playing field to exhibit the potential they have for the country and Nigeria.

“We believe that Governor Wike is one of our candidate that have those qualities to lead Nigeria. And that is why we wish him well and we also thank you for coming to submit this form.”

Nigeria Customs Intercept 40 Drums of Ethanol, Fake Currency, Others In...