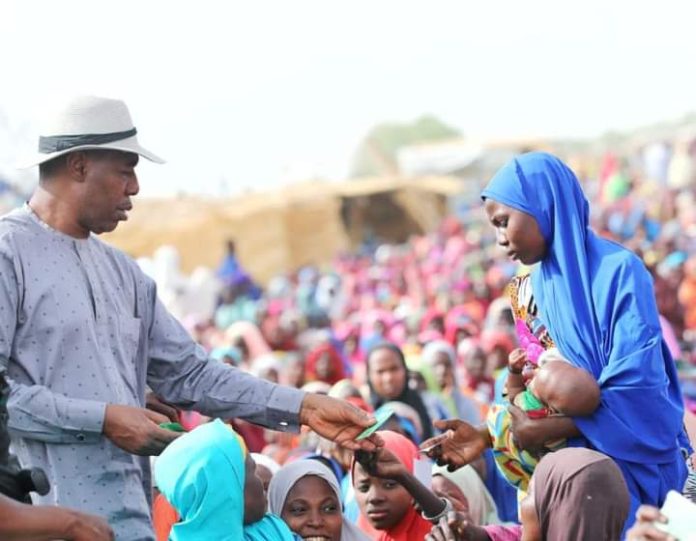 Borno State Governor, Professor Babagana Umara Zulum is on a trip to Monguno since Thursday, supervising the distribution of two hundred and seventy five million naira (N275m) alongside bags of food, and textiles to 90,000 households that are internally displaced.

This kind of intervention, which Zulum has sustained in the last three years, is part of multi-faced efforts to increase the resilience of communities affected by Boko Haram attacks, supporting them with livelihoods as they gradually transit into farming, micro, small, and medium scale businesses in order to eventually cater for themselves.

The cash support has also been an effective tool in fighting Boko Haram’s ability to recruit spies from extremely poor and vulnerable communities, by offering some residents as low as N5,000 as financial incentives.

Zulum, alongside the Chief Whip of the House of Representatives, Barr. Mohammed Tahir Monguno travelled by road from Maiduguri on Thursday, passed the night in Mafa, his hometown, and arrived Monguno on Friday morning to commence humanitarian activities.

Monguno has been host to internally displaced persons from about five Local Government Areas in the fringes of the Lake Chad, as well as refugees who returned from Niger Republic after fleeing from Boko Haram’s attacks between 2013 and 2014.

After interacting with the IDPs and returned refugees in Monguno, Governor Zulum on Friday, supervised distribution of wrapper, sugar, and N5,000 each to 55,000 women, making a total of N275 million.

After dealing with women throughout the day, Zulum began midnight supervision on Saturday, to reach 35,000 male heads of households who had lined up in anxious anticipation. Each of the men was provided two big bags of rice and maize grits.

The combined numbers of male and female beneficiaries made up 90,000.

Governor Zulum traveled to Monguno in company of Government officials undertaking construction of over 1,000 houses in Monguno, rebuilding of existing homes, healthcare and water facilities, schools and markets.