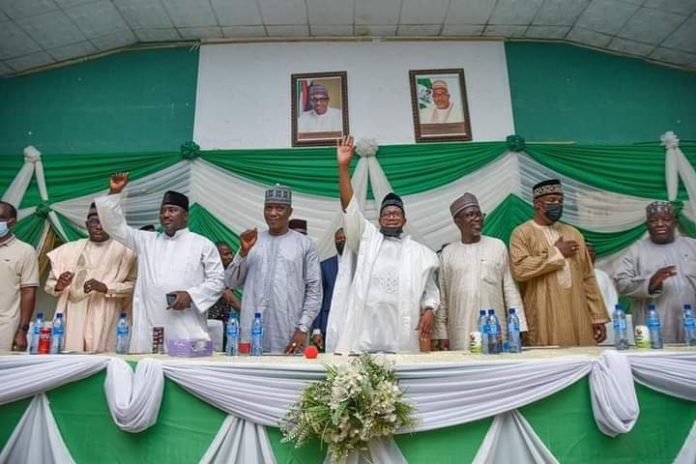 :As Gov Bala welcomes him to Bauchi ruling Party

“Directs establishment of College of Education in Dass

The Speaker, Bauchi State House of Assembly Abubakar Y Sulaiman on Saturday evening formally announced his defection from the All Progressive Congress (APC) to the ruling People’s Democratic Party (PDP) in the state.

The speaker made the announcement at Government House Bauchi while breaking Ramadan fast with Governor Bala Mohammed alongside PDP stakeholders from Ningi, Toro, Warji and Dass local government areas of the state.

Speaker Abubakar Sulaiman said his decision to return to his former party, the PDP was as a result of his good understanding and working relationship with the governor and promised to work together for the best interest of the state.

“I want to use this opportunity today to officially announce to His Excellency, the Executive Governor of Bauchi State, Senator Bala Abdulkadir Mohammed and other stakeholders in the People’s Democratic Party ( PDP ) of my formal defection to the State ruling party . One of my reasons to return to PDP is in recognition of the exemplary leadership style of our Governor and his commitment to transforming the state.”

The speaker appreciated Governor Bala Mohammed for the harmonious working relationship with the state assembly which he observed, has paved away for the successes recorded by his administration in the area of delivery of dividends of democracy to the citizens of the state.

On his part, Governor Bala Mohammed who welcomed the speaker to the ruling People’s Democratic Party in the state, assured him that he will be carried along in all the party’s affairs because of the honor done to the party.

The governor acknowledged the good working relationship between his administration and the state assembly and called for continued working synergy for the speedy development and progress of the state.

“We are grateful to Almighty Allah for bringing us to this Holy month of Ramadan with good health and peace in Bauchi state and we are grateful to you as our stakeholders for your contribution to my emergence as Governor of Bauchi State in the last general elections.

“When we took over , Bauchi State was in a stage of total collapse in critical sectors of the economy and Alhamdulillah our efforts in Health, education are yielding positive results. I urge our stakeholders for your continued support for the success of the PDP led administration in the state.”

Governor Bala Mohammed who directed for the establishment of College of Education in Dass local government area, promised that he will continue to work towards fulfilling his campaign promises for greater Bauchi state.